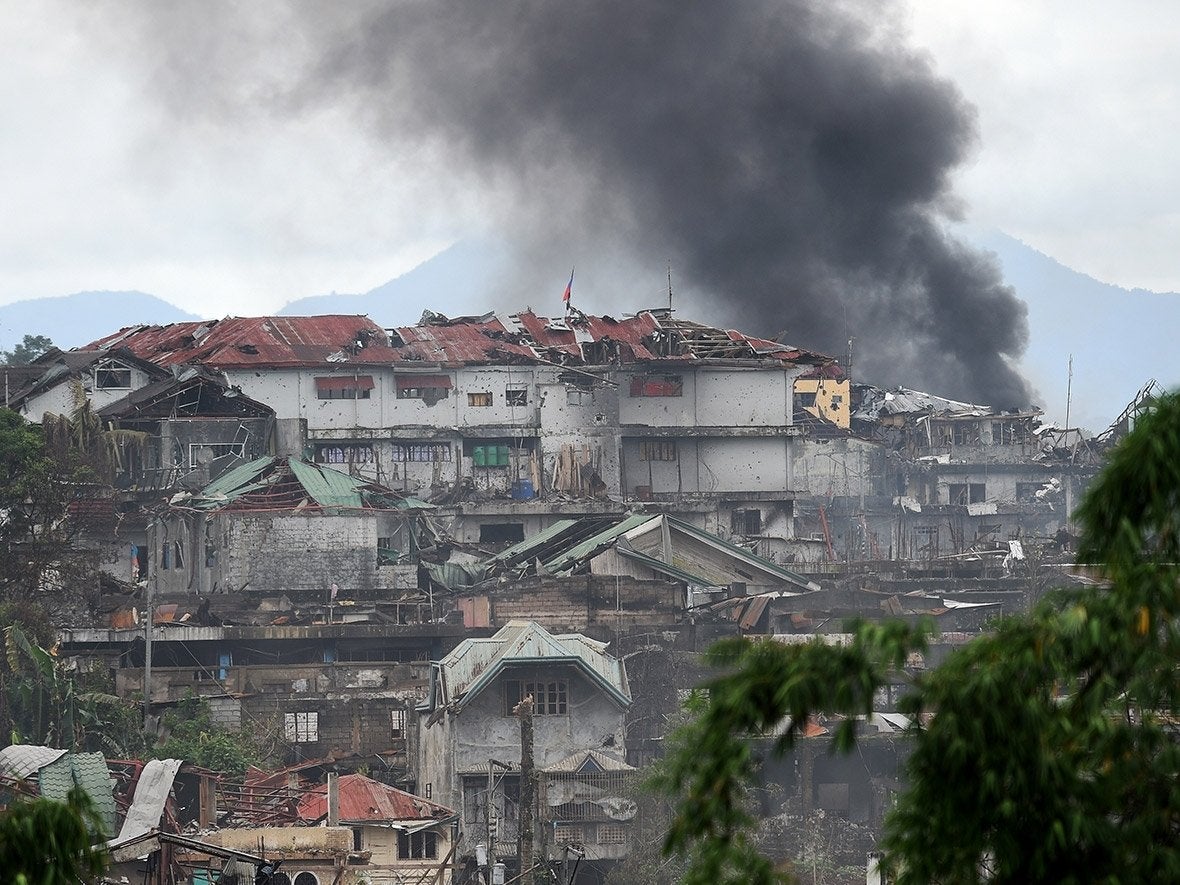 With the help of U.S. special forces, the Armed Forces of the Philippines have been battling radical Islamic terrorists in the south Pacific island chain since 2002. The Philippines, a former Spanish colony, is a predominantly Christian nation. However, its southern islands are home to a large Muslim population. Since the late 60s, there has been some form of push, political or terrorist, to create an independent Muslim state in the southern Philippines. The most prominent terror organization in Philippines since the early 2000s is the Abu Sayyaf Group.

Known officially by their ISIS counterparts as Islamic State — East Asia Province, ASG first had ties to Al-Qaeda. They operated extensively throughout southeast Asia, especially in Malaysia, Indonesia, and the Philippines. ASG conducted bombings, kidnappings, assassinations, and drug trafficking to further their cause for an Islamic caliphate. Under the leadership of Isnilon Hapilon, who swore allegiance to ISIS leader Abu Bakr al-Baghdadi, ASG began conducting kidnappings and killings in the name of ISIS in 2014.

Simultaneously, brothers Omar and Abdullah Maute, founded their own Islamic terrorist organization in their hometown of Marawi in the southern Philippines. The brothers were educated in Muslim nations overseas where they were radicalized. Bringing this ideology back to the Philippines, they recruited other Muslim Filipinos to their cause. Working alongside Hapilon, Maute group and ASG stockpiled weapons and ammo in Marawi for a planned offensive. It would be their opening attack to establish an Islamic caliphate in the Philippines.

By May 2017, Maute group and ASG had amassed a huge stockpile of arms in Marawi. However, their planned offensive was forced to be accelerated. Working with the Philippine National Police, AFP Intelligence learned that Hapilon, who was on the FBI’s Most Wanted Terrorists list with a reward of $5 million, was in Marawi. A surgical operation was launched on May 23, 2017 to capture the ASG leader. However, when Philippine special forces entered the city, they found much more than they bargained for.

Prepping for the planned offensive, roughly 1,000 militants had amassed in Marawi, some of whom came from foreign countries. Heavily armed, they quickly took over the city, burning churches, homes, and executing known Christians on sight. As civilians fled, some Muslims harbored their Christian neighbors who could not get out and hid them from the extremists. ASG and Maute group blocked all roads in and out of the city and took hostages demanding that the AFP cease all military operations in and around Marawi. At the same time, Philippine President Rodrigo Duterte declared a state of martial law for the entire island of Mindanao.

The next day, additional military forces arrived and 120 hostages at the hospital were freed. Key buildings like city hall and a university were recaptured by AFP forces who established command posts in preparation for the coming operations. The Philippine Air Force began airstrikes on Marawi. Army units pushed into the city and battled against heavy resistance. Although AFP ground troops were able to re-secure much of Marawi by May 31, the sections of the city under militant control were a maze of tight alleys and closely packed buildings. It would require Fallujah-style house-to-house room-by-room clearing to secure the rest of the city.

Moreover, Hapilon and the Maute brothers were still at large. Even if the majority of the militants were killed or captured, the escape of the terrorist leaders would be a major victory for ISIS. Heavy street fighting raged through the contested areas of the city as AFP troops rooted out pockets of resistance in search of the high value targets. To complicate the already arduous task of urban combat, the militants dug tunnels throughout the city. Like the Vietcong in Vietnam or the Soviets in Stalingrad, this allowed them to escape quickly and covertly from an engagement and reappear in an unexpected location.

Fighting continued through June with the AFP announcing that it had killed over 200 militants. Still, resistance in the city was stiff and Marawi seemed no closer to being secured. Additionally, an estimated 2,000 civilians remained trapped in the city. On the morning of June 25, a unilateral ceasefire began in recognition of the Islamic holiday of Eid. This allowed Muslims on both sides of the fighting to observe the end of the month-long period of Ramadan. It also gave many civilians the opportunity to escape. Despite the ceasefire, militant snipers continued to engage AFP positions. At the end of the ceasefire, combat operations resumed in full.

In addition to technical support from the United States in hunting the wanted terrorist leaders, the Philippines accepted the aid of the Australians. Two AP-3C Orion surveillance planes were sent to the Philippines to support the battle. By July, AFP reported nearly 400 militants had been killed and over 700 civilians had been rescued. Still, 93 AFP service members were KIA and at least 45 civilians were dead.

On July 20, AFP forces scored a major strategic victory. Mapandi bridge, which provides access to Marawi’s commercial center, was retaken. This allowed AFP armored vehicles to push further into the city. Intense close-quarter fighting continued in the city’s rubble. IEDs and militant snipers made progress slow and deadly. However, AFP forces scored a major victory when Abdullah Maute was killed in an airstrike on August 7. His death was a morale boost for the weary Filipino troops who had been engaged in heavy and constant combat for months.

On August 18, the AFP announced that the combat zone had been reduced to an area covering 800×600 meters. Still, this section of the city contained 400 buildings which would have to be cleared one-by-one in search of Hapilon and Omar Maute.

By September, the combat zone had been reduced to an area of 500 square meters. However, these gains came at a high cost. Hundreds of Filipino troops had been wounded and dozens killed. On September 24, the last key bridge in Marawi was captured by the AFP, effectively isolating the remaining militants. Although Islamic representatives lobbied for a peace agreement, the Philippine government rejected them, saying that it was too little, too late. They would accept nothing less than total victory over the terrorists. In October, a major development occurred that would help bring the fighting to an end.

A hostage who had been held by Hapilon and Maute managed to escape to AFP lines and informed them of the location of the terrorist leaders. Army Special Forces Command quickly planned a top-tier operation. Elements of the 1st Scout Ranger Regiment and the Light Reaction Regiment, modeled after the 75th Ranger Regiment and Delta Force respectively, were tasked with clearing the suspected location and killing or capturing Hapilon and Maute. Trained by their American counterparts, these were the best men for the job. Supported by armored fighting vehicles, the commandos executed the operation on October 16.

As the special forces troops assaulted the target building, Hapilon and Maute escaped out the back. However, they were engaged by the remainder of the commandos and the armored vehicles who had secured the rear of the building. Maute was almost immediately killed by the .50-cal gunner in one of the vehicles. However, the gunner was unable it identify the fleeing militant as Maute through his thermal sight. Meanwhile, Hapilon was engaged by Ranger sniper teams who struck him three times in the chest. Despite going down, Hapilon harmlessly returned fire until he succumbed to his wounds.

The commandos killed a further 8 militants in securing the target building. 17 hostages including women, children, and a 2-month-old baby, were rescued. There were no AFP or civilian casualties. Once the target area was secure, the commandos went through the bodies and identified Hapilon and Maute. The announcement of their deaths was met with celebration across Marawi. DNA samples were sent to the FBI in the United States who confirmed the identities of the terrorist leaders.

The next day, President Duterte flew down to Marawi and declared the city’s liberation from the Islamic state. Fighting continued until October 23, exactly five months from the start of the battle, when the last pockets of ASG and Maute fighters were eliminated. The victory was hard-won. 168 Philippine service members were killed and over 1,400 were wounded. Sadly, 87 civilians also lost their lives during the five months of fighting. Still, 978 militants were killed and 12 were captured. The Battle of Marawi dealt a major blow to ASG and all but eliminated Maute group.

Marawi itself suffered greatly. 95% of structures in the 4 square kilometer combat zone were damaged, if not completely destroyed. This left 200,000 civilians displaced. The battle was the most intense and destructive in the Philippines since WWII. Rehabilitation and recovery efforts continue to this day.

The Battle of Marawi was the ultimate failure for ISIS in southeast Asia and a display of strength and unity for the Filipino people. ASG and Maute group were unable to establish their caliphate. Moreover, the Filipino people, Muslims, Christians, soldiers, and civilians alike, stood side-by-side against the violence and terror brought upon them and prevailed.