NASA is designing crafts to explore the seas on Saturn’s moon, Titan

NASA is designing submarines and drones to explore the seas on Saturn’s moon, Titan 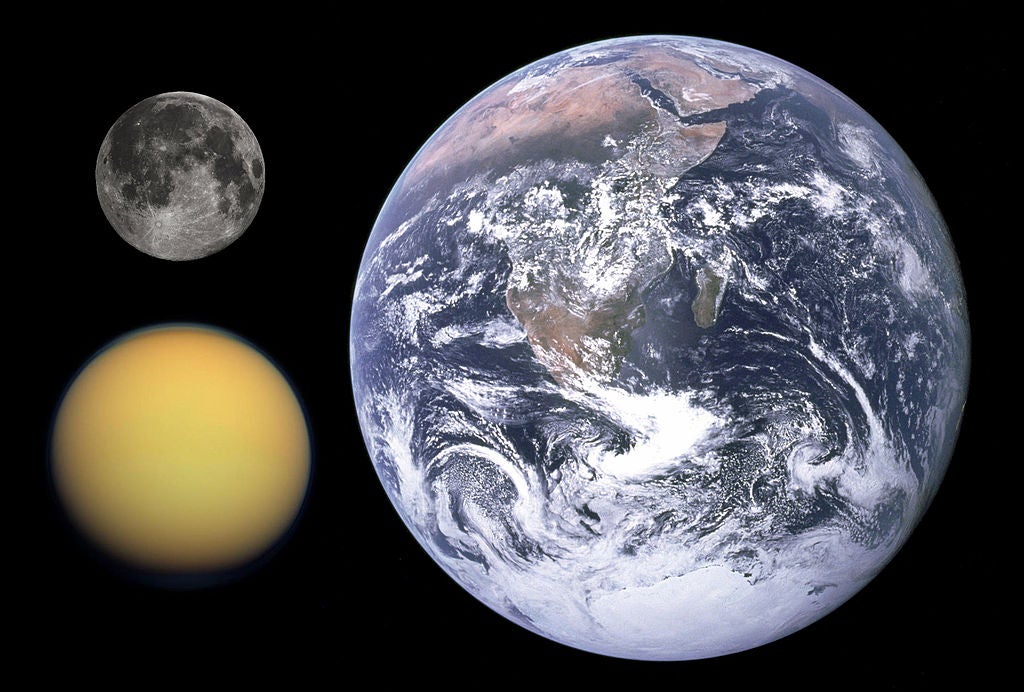 Size comparison: Titan (lower left) with the Moon and Earth (top and right).

If you thought life was difficult for the submarine service of the U.S. Navy here on Earth, just imagine a deployment to Saturn’s largest of 83 moons, Titan. The solar system’s second-largest natural satellite is 746 million miles away from earth, taking seven years to get there and seven years to return.

It might sound like a crazy mission, but NASA is currently working on a plan to do that, as you read this. The goal of that mission is to explore Titan’s surface and bring home a sample. What makes Titan so interesting to scientists is that Saturn’s moon is unique in the solar system. It’s the only other celestial body in the system with liquid on its surface.

Unlike Earth, Titan’s lakes and seas aren’t made up of water. Instead, they’re made up of liquid methane and other hydrocarbons. If the word hydrocarbons sounds familiar, that’s because it’s another word for what we call “fossil fuels:” coal, natural gas, and crude oil.

Yes, America is planning to invade Saturn’s moon for oil. This time, it’s not for fuel (probably), it’s to explore the beginnings of life on Earth and potentially elsewhere in the universe.

Part of the NASA Innovative Advanced Concepts (NIAC) program, the expedition plans to launch its Dragonfly drone in 2025, destined to arrive in 2034. But scientists still wondered what lies beneath the surface of Titan’s seas. To explore these areas, NIAC proposed building a submarine drone to be dropped into the northernmost sea, Kraken Mare.

The submarine would be able to analyze and send back information regarding the composition of the liquid surface as well as information about the tides, winds, and waves in an atmosphere that is mostly nitrogen.

“This investigation represents a significant advancement in our understanding of the history and evolution of organic compounds in the solar system, and hence a critical step along the path to understanding the evolution of life here on Earth and potential life elsewhere in the galaxy,” NASA’s proposal reads.

While the submarine is an exciting concept for scientists, they don’t need to go looking below the surface for more excitement. On the surface of the hydrocarbon ocean are organic compounds called tholins. Tholins occur naturally when any organic substance, including hydrocarbons, is exposed to sunlight and radiation over a long period of time.

Titan’s surface shows evidence of tholins, described as material of a muddy, reddish color, splashing around on the hydrocarbon seas. Aside from that, almost nothing else is known about them. Astronomers speculate that these molecular tholins could be the earliest building blocks of life in the universe. Saturn is the planet nearest to the sun where tholins are found, but many believe tholins were once present on Earth.

The Dragonfly mission will scout the surface of Titan to tell NASA what it needs to know to conduct another mission, one that will return to Earth with samples of the extraterrestrial sea, and potentially the tholins themselves. The return mission might even be fueled by the hydrocarbons already present on the surface.

Dragonfly’s mission is estimated to last 14 years, and since that mission is required to learn what it would take to conduct a mission designed to return to Earth, the timeframe of learning about Titan’s oceans is currently undetermined.