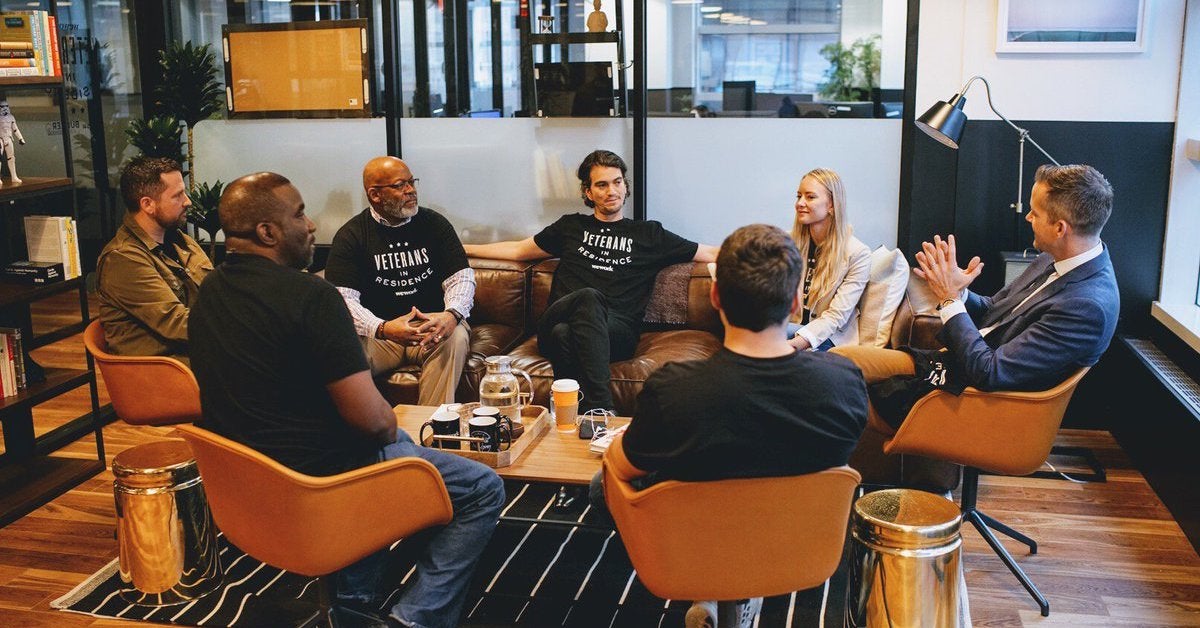 This article is sponsored by Bunker Labs.

Veterans In Residence program, a partnership of Bunker Labs and WeWork, is a six-month business incubator that is revolutionizing entrepreneurship for veterans — just ask Bryan Jacobs.

“When I joined the military, every male in my family had served,” the Tampa-based entrepreneur told We Are The Mighty. “There was a long line of service there. I wasn’t pressured into it, but it wasn’t my first choice. I wanted to be the first male in my family to go to college, but I was young and naive and it didn’t work out that way.”

When Jacobs left the military in 2005 after six years of service, he felt lost.

“When I got out of the military, I went through a lot of changes and became homeless,” he shared, saying much of his identity had been linked to his military career. “I wasn’t ready for anything that the outside world had to offer. In fact, I came out of the military rather quickly. I left Iraq November 5 and was out by November 25. There was no transition or support. It was a different world then.”

Inspired by the legacy of his grandfather, a chef, Jacobs leaned into his entrepreneurial spirit to navigate his newly-minted civilian life. Still homeless, he signed up for culinary school.

“I love to cook so much I took two cookbooks to Iraq that I could read. It took me out of the pain of life and the emotional struggles I was living in,” he shared. “I went to culinary school in 2008. I was couch surfing, sleeping in a garage and had a part-time job as a trainer, where I could take showers. I had made some bad choices and didn’t have a lot of knowledge and didn’t understand the power of knowledge.”

In May of 2014, Jacobs tragically lost his younger brother, who also served, to suicide. It was the wake-up call he needed to reevaluate his life and shift perspectives.

“I felt responsible as a brother in arms, but also as a brother in general,” he shared. “I kept asking myself,  ‘Why am I still here?’ and ‘What is the light in the darkness?’”

Through personal growth and introspection, Jacobs launched Vets 2 Success, a nonprofit organization that supports homeless and displaced veterans in finding their passion and purpose through food and brew programs.

Jacobs shared an exercise in which he challenges veterans to think about the specific ingredients in their favorite foods and equates it to ‘bad ingredients’ in life.

“If there are bad ingredients in the recipe, would it still be seen the same? Of course not,” he shared. “So if you have all these bad ingredients in your life, that’s how you are going to be seen. That’s how easy it is to inspire them to see their personal changes. What we’re doing is helping them see the process that needs to be enveloped. And those ingredients don’t come overnight. They don’t come in a quick trip that can be solved tomorrow, but it’s a process to get to the plate. This is how we talk about retraining their minds to look at problems and find solutions.”

As his nonprofit grew, Jacobs continued to seek both personal and professional development, which is how he discovered the Veterans In Residence program. The program, a partnership of Bunker Labs and WeWork, is a peer-facilitated, six-month business incubator that provides military-connected entrepreneurs, including veteran small business owners, a networking community, business skills and a workspace to help launch and grow their business.

Currently operating in 23 major cities, Veterans In Residence helps entrepreneurs take their business ideas to the next level through facilitated accountability and connections.

“We look for the companies we select for these programs to be at  a point where they can really leverage their time in the cohort as much as possible and also be a value add for their peers,” Ann Cardona of Bunker Labs, shared.

Jacobs took on the rigorous application process, was accepted and began the cohort in July 2020 for a new arm of his existing nonprofit. The entrepreneur and aspiring innovationist recommends that applicants come with direction, but be open-minded for that plan to shift.

“My plan has completely grown in different aspects and avenues than I ever thought,” Jacobs shared on his experience with the six-month program. “Be okay with good, constant feedback and be prepared to be challenged. That was something that took me by surprise. Of course everyone is in love with their own idea. You have to hear from others that they believe in your idea. It gave me a boost of confidence that other entrepreneurs believed in it. As an entrepreneur you feel crazy already. The program gave me the confidence to say – this is going to work, but it’s not going to be easy and that’s okay.”

The next Veterans In Residence cohort, set to begin in early 2021, will be the most diverse yet. Bunker Labs anonymized the applications in the selection process, ensuring they were blind to names, gender, location and ethnicity.

“There were three of us that looked at all 409 companies that had a legal entity set up to ensure consistency throughout the process,” Cardona said. “The IT team set up a comprehensive application process and rubric for applicants. We wanted to make sure there were no unconscious biases in the selection process. We broke them back up into locations after the initial screening and we did a virtual group interview with the top 20 candidates in each location to get to our final eight. We will have two virtual cohorts that are a conglomerate of entrepreneurs from across the nation where Bunker Labs does not currently have a coworking space agreement (such as with WeWork) already established.

Cardona stated that Bunker Labs aims to have the upcoming cohort be the most impactful yet by ensuring everyone has a legal entity set up prior to the cohort beginning.

For companies that are not at this point yet, Bunker Labs encourages them to join the Bunker Online community, focus on Launch Lab Online, and participate in workshop series that are designed to get prospective cohort applicants ready for the next Veterans In Residence cohort.

“Almost all of the companies are out of the ideation phase and most are already seeing some traction, which is different than past cohorts where we still had a good number that were very much in ideation,” Cardona shared. “We also chose companies that had more defined goals and were able to be vulnerable and honest about where they were in their businesses and what their true needs were. If the cohort members already have a good idea of where they are going and what they need from us, it is much easier for us to connect them with the correct resources and have a bigger impact on their business.”

“The best part of Veterans In Residence was the city leaders,” Jacobs said. “Just having people who cared about you, who are trying to run their own businesses, but they are there to help you. When they said they were going to get things done, they did. It was having that confidence. As an entrepreneur you hear all the time – hey I’m gonna hook you up – but everyone has an agenda. None of these people had a [personal] agenda.”

Nearly two decades removed from war, Jacobs still draws parallels to his time in the military with his current role as a founder and entrepreneur.

“Walking through life as an entrepreneur is like combat – you’re just hoping for success that you come out on the other side,” he said. “Veterans In Residence helped propel my confidence as an entrepreneur. It helped me realize there’s something bigger – it’s not a personal endeavor and I didn’t have that feeling going in, but coming out the other side there is a completely new perspective laid before me.”

This article is sponsored by Bunker Labs.