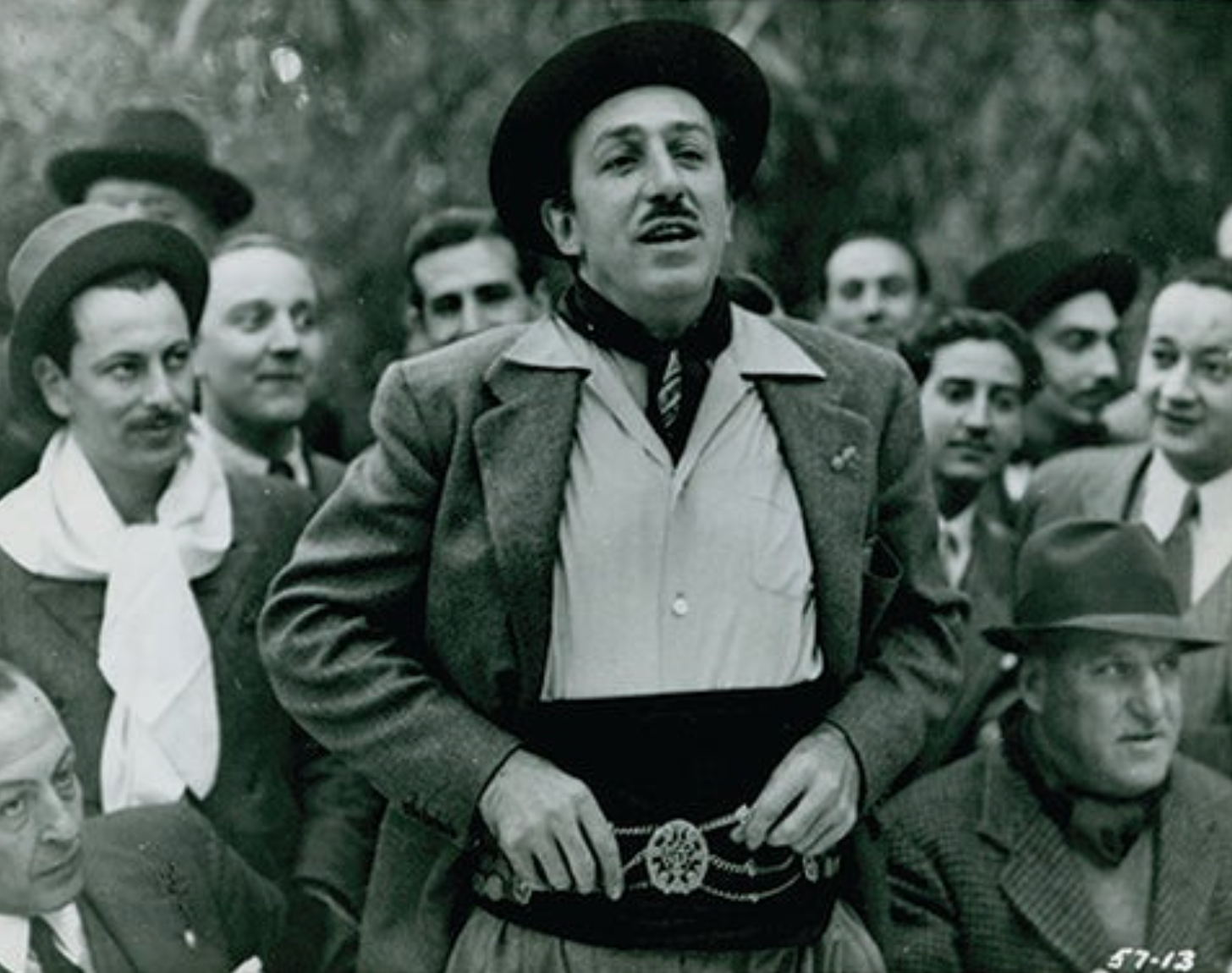 Disney in full gaucho dress at a barbecue in Argentina (Disney).

Walt Disney is known as an artist, animator and creative genius. Moreover, the man was a staunch patriot. His love of country is evident in the celebration of America featured in his films and theme parks. Moreover, the Walt Disney Company produced insignias and training films for the military at cost during WWII. However, before America even entered the war, Disney was winning hearts and minds to aid his country in the difficult years to come.

In 1940, the newly formed Coordinator of Inter-American Affairs, a government agency under the direction of Nelson A. Rockefeller, was looking to prevent the growth of Nazi sympathy in South America. US ambassadors were largely ineffective at garnering favor, so prominent Hollywood figures were asked to infuse Latin American themes into their films to gain sympathy. Even better, the CIAA asked popular figures to conduct goodwill missions to key South American countries to promote friendship and deter Nazism. Naturally, the government asked Disney.

Initially, Disney was unsure of the mission, stating that he wasn’t good at shaking hands. However, the idea of conducting research on the trip for future films changed his mind. The war in Europe had cut off an entire market and an animator’s strike threatened the Walt Disney Company’s survival. With the promise of new material and a new market audience, Disney was on board. Although the contract for the trip was not signed until August 1941, Disney hand-picked the people who would accompany him by the end of July.

Disney’s group consisted of 15 studio employees, one employee’s wife and Disney’s wife, Lillian. With Disney, the group of 18 was nicknamed “El Grupo,” Spanish for “The Group” and is synonymous with Disney’s South American trip. On August 17, 1941, Disney’s flight landed in Rio de Janeiro and the goodwill mission was on.

Unlike the ambassadors before him, Disney didn’t do the usual glad-handing and gift-giving. Rather, he immersed himself in the local culture as a filmmaker. “I set up a shop,” he later recalled in an interview. “Never went near the embassy. Didn’t go around the usual haunts of the goodwill people. I went right in.” In Brazil, Disney and his artists took note of the cultural significance of the Brazilian Parrot and studied it extensively. This research resulted in the character José Carioca who would appear with Donald Duck and Goofy in Disney’s 1942 film Saludos Amigos.

After Brazil, El Grupo continued the goodwill mission in Argentina. In the city of Mendoza, Disney reportedly exhausted his rudimentary Spanish and resorted to standing on his head to entertain a theater full of school kids. Despite the language barriers, Disney knew how to make children smile. However, while he was in Argentina, Disney received troubling news from home. His brother, Roy, was managing the business side of the company and informed him that the animator’s strike had been settled in a manner not particularly favorable to the company. On top of this, their father, Elias Disney, had passed away during the trip. Despite the bad news from home, Disney pressed on with the goodwill mission.

Throughout the trip, Disney met with government officials and dignitaries, radio hosts and reporters, fellow artists and filmmakers, and more. Everywhere he went, he was greeted by crowds of children eager to meet the man who created such wonderful animations. Disney’s charm and popularity was more effective at building relationships down south than any of the previous CIAA missions. After Argentina, El Grupo split up to cover other countries, including Bolivia and Peru, before reuniting in Santiago, Chile on September 29. On October 4, they boarded the T.E.S. Santa Clara and sailed for home.

In addition to Saludos Amigos, Disney also released The Three Caballeros in 1944, inspired by his South American goodwill mission. Both films were well-received by critics and audiences alike. Moreover, the inclusion of Latino culture helped to promote the international friendship that the CIAA was looking for. Disney later commented on the financing of the successful mission in an interview. “It was one of those things that they thought Disney needed the subsidy,” he said. “But you know, fortunately that little thing went out and it did a heck of a business, and the United States government didn’t have to put up one nickel.” Lesson learned: never send a diplomat to do a Disney’s job.