That time a Greek Priest Saved Over 27,000 from the Concentration Camps - We Are The Mighty

That time a Greek Priest Saved Over 27,000 from the Concentration Camps 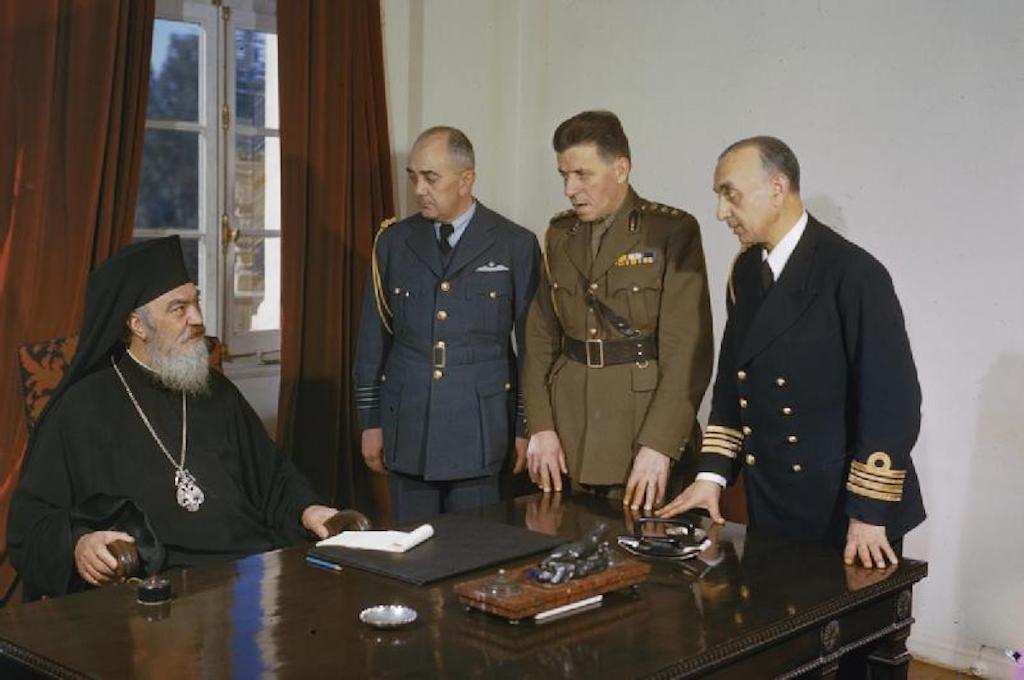 Damaskinos as regent of Greece with the chiefs of the armed forces, February 1945. (Imperial War Museum).

Greece is no stranger to legendary war heroes from King Leonidas of Sparta to Alexander the Great. However, one of its greatest achieved his heroic status without swinging a sword or firing a gun. Damaskinos Papandreou was the Archbishop of Athens from 1941 until his death in 1949, which coincided with the German occupation of Greece during the Second World War. As the highest-ranking priest in Greece, he not only proved a strong an adversary to the Nazis but also a staunch ally to Greece’s Jewish population. His actions and leadership are credited with saving over 27,000 Greek Jews from deportation to the concentration camps.

Born Dimitris Papandreou to a poor family in rural Greece on March 3, 1891, the Archbishop completed his studies in law and theology before serving in the Greek Army during the 1912-1913 Balkan Wars. Upon his return, he was ordained a Greek Orthodox Priest in 1917 and rose to the position of Archbishop of Athens in 1941. This position made him the spiritual leader of the Greek Orthodox people of Athens and all of Greece. His leadership would prove instrumental during the Nazi occupation of his country.

Nazi Germany invaded and occupied Greece in 1941 and, in 1943, began a deportation policy of Greek Jews to concentration camps. Enraged, Damaskinos marched to the headquarters of the German SS Commander, General Jurgen Stroop. He brought a letter the Greek Prime Minister had previously refused to deliver. In it, he unequivocally affirmed his support for Greece’s Jewish community and made clear that he would not comply with any German deportation orders. Upon reading this, an enraged Stroop stated that he would have Damaskinos shot. Unphased, the Archbishop replied: “According to the traditions of the Greek Orthodox Church, our prelates are hanged and not shot. Please respect our traditions!” Taken aback by this response, the Nazi commander never made good on his threat.

Damaskinos stated: “I have taken up my cross. I spoke to the Lord and made up my mind to save as many Jewish souls as possible.”  He worked with the Police Chief of Athens to issue over 27,000 baptismal certificates and identity papers that would give Greece’s Jews safe passage through Nazi checkpoints. He also ordered churches and monasteries throughout the country to serve as Jewish shelters and for priests to hide Jewish families in their homes.

Greek priests wholeheartedly followed their Archbishop’s lead in their defiance to the Nazis. In one notable instance, Joachim, the Bishop of Volos, was ordered to submit names of the town’s Jewish residents. After ensuring their safe evacuation, he responded with one name: his own. Frustrated by his leadership of the resistance, the Nazi authorities placed Damaskinos under house arrest in 1944 and threatened to send him to the concentration camps. The Germans never made good on this threat, and Greece was liberated by the Allied forces shortly thereafter. He served as the country’s ruler for a short period after the war and died in 1949. He is remembered as a hero in both Greece and Israel, where he is honored in Israel’s Holocaust Museum in Jerusalem as “Righteous Among the Nations,” a designation given to non-Jews who risked their own lives to save Jews during the Holocaust.