It's a wonderfully, complicated life: How WWII shaped James 'Jimmy' Stewart - We Are The Mighty 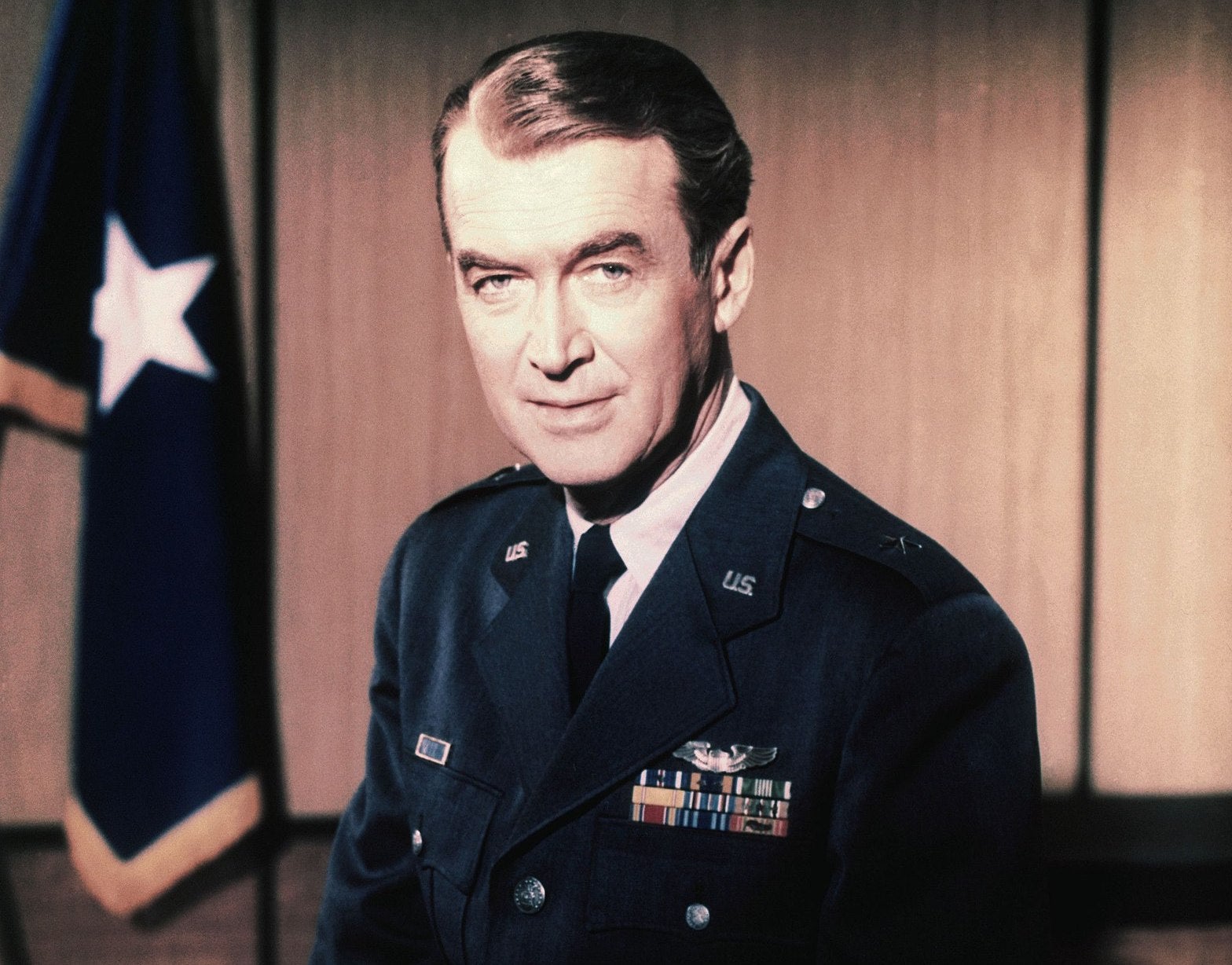 Has an actor ever portrayed himself on film or on the stage?

No one comes to mind, although Christopher Walken has said that in all his films, he’s just “playing myself.”

Obviously, actors don’t portray themselves. And yet, Jimmy Stewart came close for a few scenes in the now-Christmas classic, “It’s a Wonderful Life.” Stewart of course is the famously affable, aw-shucks guy from idyllic Indiana, Pennsylvania. The rolling hills and small-town feel are just what we’d expect to find in Stewart’s hometown.

Tall and rail-thin, yet handsome and compelling, Stewart (who hated being called “Jimmy,” preferring the more formal James) had established himself by the end of the 1930s as box-office gold.

The 1934 film, “After the Thin Man,” saw Stewart (in only his eleventh film) play against type as a cold-blooded killer, revealed at the end by William Powell’s alter-ego Nick Charles. But this kind of character was very much not the Jimmy Stewart Depression-era audiences had come to know and love.

Defining roles like “Mr. Smith Goes to Washington” and “The Philadelphia Story” established Stewart as a champion of good and truth. His skill at comedy added to his acting arsenal.

He was just so decent.

In the lead-up, Stewart was still reliable in his steadiness as the characters he played. One film, though, 1940’s “The Mortal Storm,” was somewhat of a harbinger of things to come in his career. In this film, Stewart is a German that resists Hitler’s madness. It is a gripping thriller and Stewart delivers.

Soon after, Jimmy Stewart did what millions of patriotic men and women did: he joined the service. Actually, he joined months before Pearl Harbor, and his interest in flying led him to the Army Air Corps. In those days, even Hollywood’s powerful elite had a sense of duty. Clark Gable followed a similar path and in fact, it’s stunning to think of Rhett Butler winding up flying several missions over Germany.

In any case, Stewart took his responsibilities with the 445th Bombardment Group deadly seriously.

The couple dozen missions Stewart flew (either as lead pilot or co-pilot) were so dangerous, it’s literally miraculous he survived. Many airmen did not. Throughout the war, The Eighth Air Force lost 26,000 men and more than 10,000 planes. German anti-aircraft fire, not to mention the Luftwaffe, did to Stewart what it did to countless others: PTSD. Stewart’s own sense of duty and preparedness in a way added to his stress, because he did not allow himself to fall apart in front of his men. It endeared him to those he fought alongside:

“’His soft drawl was calming to the airmen,’ historian Michael Simpson has said. ‘I talked with several members of the 703rd who said he was a dynamic leader who didn’t need to crack the whip. Once, an enlisted man stole a keg of beer from the officer’s club. They stashed it in their Quonset hut and wrapped it up in blankets. Stewart came in and noticed the pile of blankets. Instead of throwing a fit, he took a canteen cup and poured himself a beer. As he sipped on it, he mentioned that a keg of beer had disappeared, and he knew that none of his men would have taken it. He then finished the beer and walked out of the hut. They couldn’t wait to return the keg!’”

Ironically, his first film upon returning from the war was “It’s a Wonderful Life,” the Frank Capra masterpiece that is as much a part of Christmas for many families as trees and presents.

Stewart’s character, George Bailey, just recover a large sum of money missing from his “building and loan,” or face dire consequences. In the scene in which he obviously draws on his war experiences, Stewart/Bailey sits at a bar while everyone around him is in a festive mood. Despondent and crushingly real, the defeated small-town friend to everyone cries out to God for help.

The shot is so searing, moviegoers for generations have marveled at Stewart’s portrayal. In fact, if we take notice, many of Stewart’s post-war roles were darker and more complex. This is no doubt due to those many terrible nights over German skies, dodging shells and bullets.

By the time he passed away in 1997, Stewart had indeed lived that wonderful life. As did many others he helped protect and keep safe.

James Maitland Stewart really was the richest man in town.