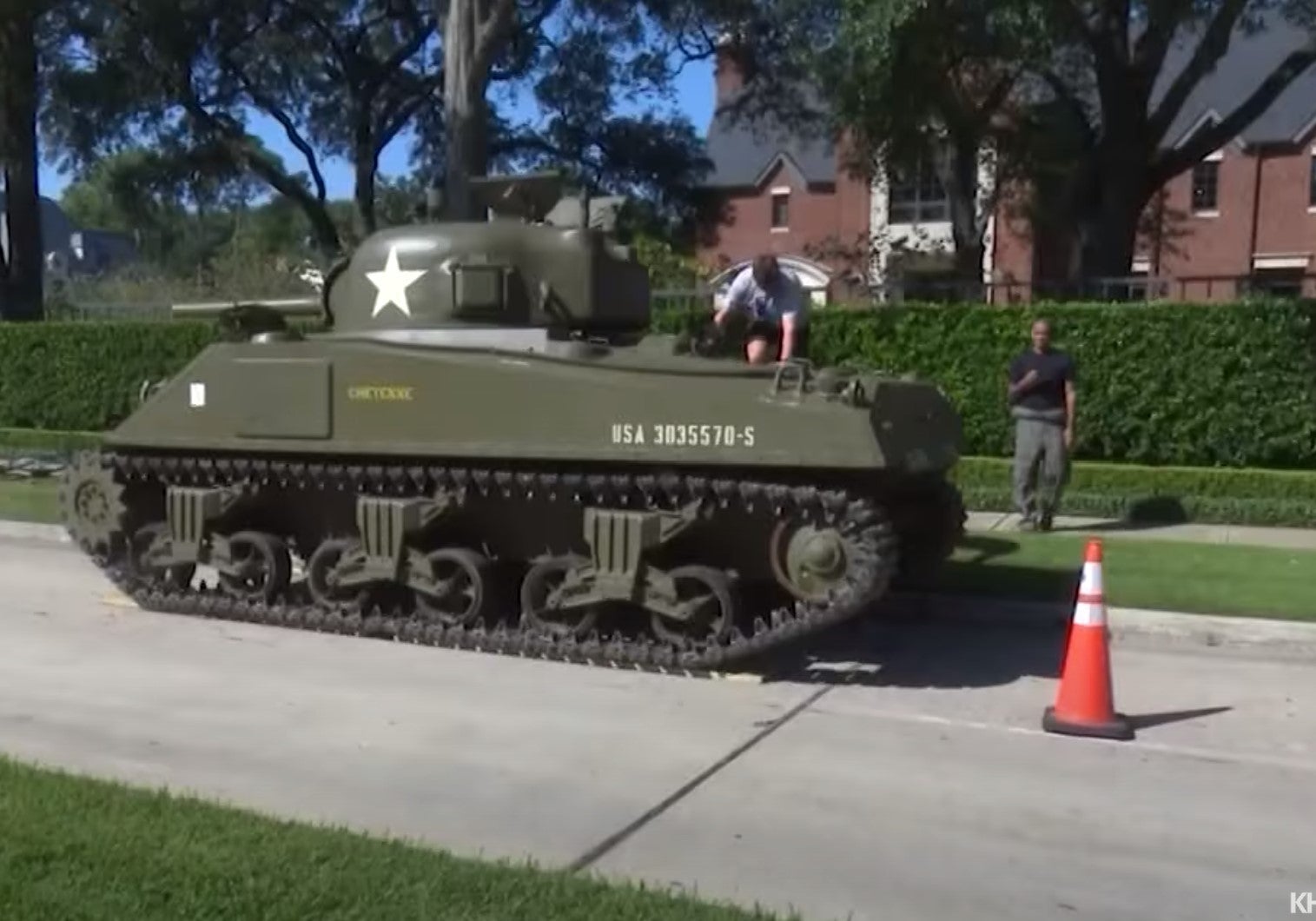 Homeowners associations like to tell American property owners what they can and can’t do with their own properties, homes, and vehicles. While to a certain extent, this makes sense, some HOAs can take it a little too far.

For about a month, the “Battle of River Oaks Boulevard” raged in a Houston residential neighborhood as lawyer Tony Buzbee fought for the right to park his World War II-era Sherman M4A4 tank at his home.

Buzbee’s home on River Oaks Boulevard is supposedly in one of Houston’s more upscale, classier neighborhoods. But the local homeowner’s association display flagrant disregard for history and a lack of class as they tried everything they could to get the Sherman tank off the street and out of their lives.

There was nothing wrong with the tank or where it was parked. The Sherman was a fully operational and completely restored original named “Cheyanne” that had sat in the Normandy Tank Museum near Omaha Beach until Buzbee purchased it in 2016.

The lawyer purchased it to preserve a bit of history while teaching others about the history of World War II.

“It was this particular type of piece of equipment that helped us win that war,” Buzbee, the grandson of a Normandy vet, told a reporter. “And had we not won that war, this would be a completely different country, now we celebrate our freedoms and our right to speak, and our right to have a tank on our front yards.”

Meanwhile, the local homeowner’s association claimed it “impeded traffic,” caused “safety issues,” and that neighbors had “serious concerns.” All of these claims are not true. In one instance, a neighbor even professed his wish that the Sherman tank was a permanent addition to the neighborhood.

This is Texas, after all. The main cannon isn’t even operable.

Buzbee even cleared the tank’s arrival with the local police and security forces in the area. He followed local law enforcement regulations and orders to the letter. That’s when the local HOA decided to step in and cause a fuss.

The first salvo was fired by the HOA, who sent Buzbee a certified letter stating he had to remove the tank. Because the letter upset him so much, he decided to do nothing just to see what the HOA would do about it.  Then he started getting parking tickets and citations for the tank, even though he had cleared its position with the Houston Police Department.

He still left it there. But when the citations kept coming, he decided to move it, despite his adamant belief that he was in the right and his neighbors loved the piece of history in their neighborhood.

So even after surviving landing at Normandy, fighting through the hedgerows of France, winning World War II, almost being lost to history after the closure of the tank museum, and Buzbee importing the tank across the ocean from France, all was for naught. All it took was a bunch of tightwads in a Houston suburb to forcibly remove one of the greatest weapons in the arsenal of democracy.
In an almost ironic twist of history, the tank that helped secure the freedoms we enjoy at home was taken down by a small group of people imposing their will on the majority. If anything, it sounds like River Oaks Boulevard needs more Sherman tanks, not less.