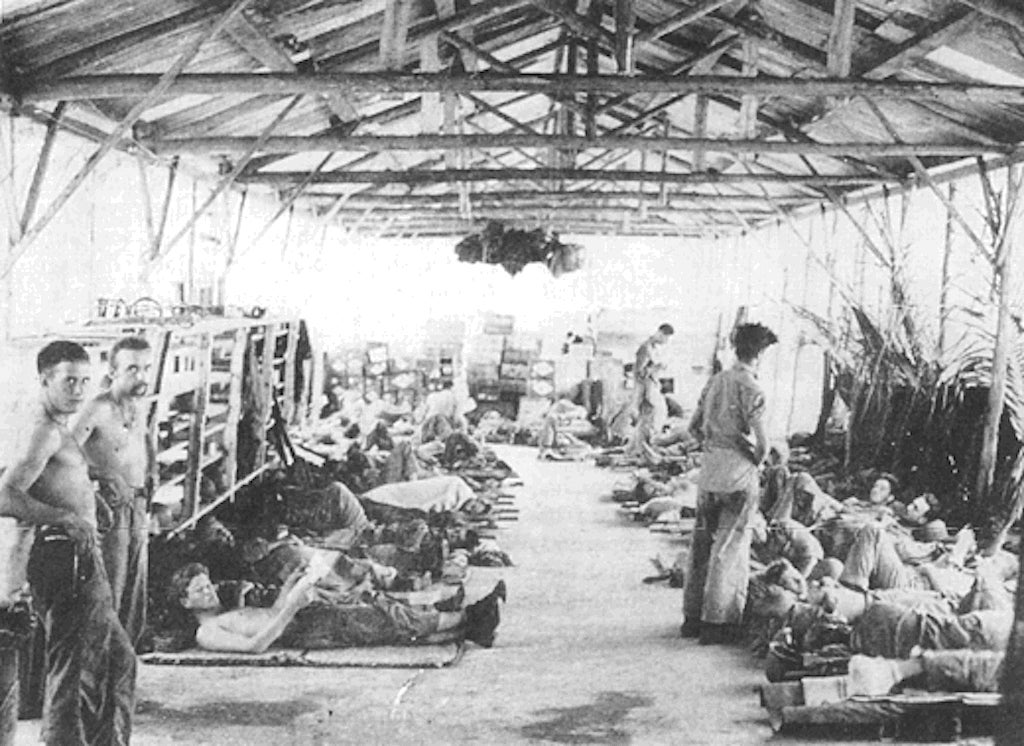 U.S. Marines with malaria in a field hospital on Guadalcanal, October 1942.

Wartime outbreaks have massively diminished the combat power of armies, induced the disqualification and revocation of military actions, and wreaked havoc on civilian groups in belligerent and non-belligerent states throughout history. Until World War I, contagious illnesses, instead of combat and non-combat injuries, were the leading root cause of anguish and mortality among troops. Twelve major war diseases savaged troops, but several were considered vector-borne, including plague, yellow fever and malaria.

When the Russo-Japanese War and WWI erupted, these were the main challenges. However, there has been a steady decrease in the occurrence of communicable illnesses among troops and civilian groups, owing to advancements in firearms and breakthroughs in hygiene military practices and disease-control measures such as vaccination. Military invasions of unpopulated ecosystems, interruption of human and natural habitats, internal migration, obliteration of local facilities and development of local conditions favorable to illness reservoirs all lead to increased risk of war directly impacting disease onset or re-emergence.

Yellow fever was a major cause of death for the troops fighting in South America, the West Indies and Africa and was widely regarded as the principal reason behind the defeat. Luckily, there is a vaccine today, so troops are not at a big risk. Yellow fever originally came from Africa and later spread to the Americas with the dawn of the slave trade. The yellow fever virus is easily transmitted through mosquito bites and is diagnosed based on symptoms.

Q-fever is a zoonotic illness transmitted by Coxiella Burnetti that is found all over the world. Coxiella Burnetti, which is observed in over 40 tick species, is typically transferred to people through inhalation of contagious aerosol. These types of epidemics have already been reported in active-duty forces. Although Q-fever is a major military problem, it is not regarded as a vector-borne illness hazard.

Tularemia, another zoonotic illness transmitted by the strongly infectious, virulent, was realized in a variety of natural mammal hosts all over the northern hemisphere. It is transferred to people in various ways, including immediate contact with contagious carcasses, intake of infected food or water, arthropod bites, and breathing infectious debris or aerosols. The most recent outbreaks in areas where troops have been dispatched were all water-related or rodent-borne, with no cases confirmed among Western military troops. Tularemia transmitted by ticks is not a major military worry, but using it as a biological weapon is.

The life forms held to account for sand-fly fever virus spreading have a concentrated but widespread geographic range. Foci have been observed from indigenous species in southern Europe, the Middle East, and Central Asia. Elevated transmission rates may take place in groups of non-immune military men deployed in risk zones. Since the virus’s incubation period is relatively short and attack rates high, sand-fly fever is a major military concern.

Since time immemorial, malaria has been a danger to troops on the battlefield, with history pointing back to ancient times. Thousands of soldiers have died as a result of the disease while on deployment, and it continues to be a major concern not only for military personnel but also for civilian groups. The mosquito-borne disease is common in tropical areas and is highly contagious. Although direct transmission of the disease from one soldier to another is difficult, if an infected soldier is bitten by a mosquito and the same mosquito bites a healthy soldier, the latter is at risk of contracting the illness. The disease symptoms include high fever, body and muscle aches, and, in the worst cases, hallucinations.