My 9/11 story: It was the catalyst that changed the course of my life - We Are The Mighty

My 9/11 story: It was the catalyst that changed the course of my life 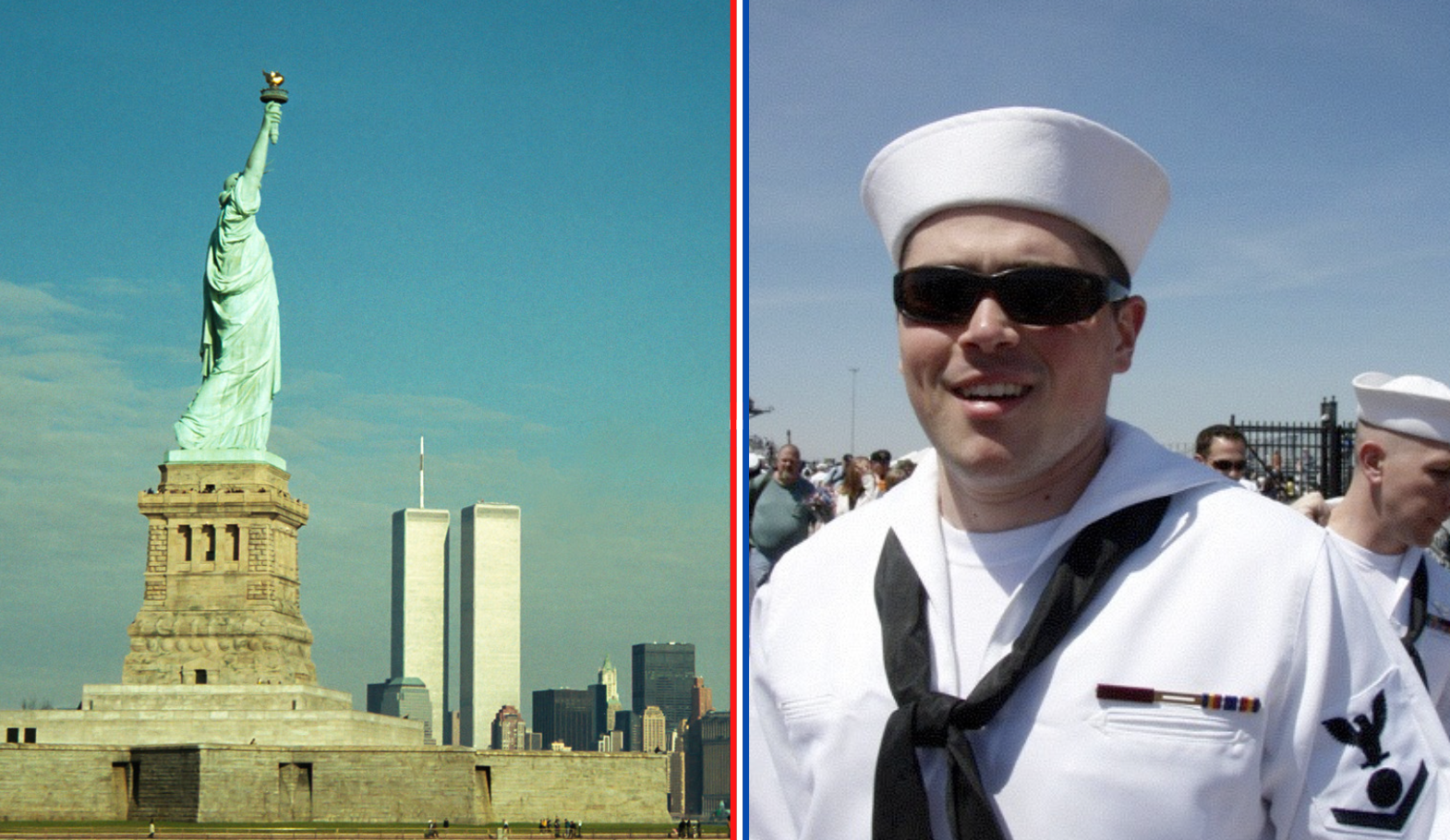 Twenty years ago, September 11, 2001, at about 830 a.m., I was filing into my 1st period class along with a handful of other high school sophomores. As we took our seats and prepared for another lesson in The History of Drama, little did we know that two Boeing 767s were about to hit each of the towers of the World Trade Center in downtown Manhattan.

By 9 a.m., word had trickled into the classroom that a plane had just hit the North Tower of the World Trade center and someone wheeled in a TV for us to follow the news. Since the reporting was still spotty, we initially thought that some ill-equipped pilot had veered off-course and accidentally crashed into the building; an odd notion due to the size and physical location of the tower but at that point in our lives we (I) had no reason to suspect it wasn’t an accident. That was all about to change, forever.

We plugged in the TV and tuned-in to Fox 5 news just in time to see the second plane crash into the South Tower, exploding into a huge fireball and dejecting huge pieces of debris and engine parts toward the ground.

The room was silent. The buzz of conversational estimations of what caused the first crash had abruptly ceased. This was a kind of reality we had never experienced. The shock captivated the room of 20 upper-middle class teenagers. Our bubble in white, affluent, suburban New York City had been infiltrated and none of us (not one) had the mental complexity to compute the weight of what was happening. It’s like the images from the TV screen were entering an incorrect password into the login page of our brains. No access. Please try again. Our minds just couldn’t accept the reality that was unfolding in front of us.

Soon that shock turned to chaos as students tried to reach parents who worked in or around the WTC. Phone lines were jammed and since many of the cell towers serving lower Manhattan were located atop the towers themselves, getting connected via cellphone was virtually impossible. Many of my classmates didn’t know their mother or father was alive until they arrived home later that day; most by walking over the George Washington Bridge.

My parents and step-father were Broadway professionals and often worked in NYC but luckily, none of them were in Manhattan that day. But although my family did escape physical harm on  9/11, their industry was hit hard – obviously darkening Broadway on the days following 9/11 but also causing a lasting reduction in ticket sales and the closure of many beloved shows and theaters. This collateral damage to the attack on our country was personal and would become a driving force in my decision to join the retaliation.

My mom came to take me home and as we drove I looked up to see two F-16 fighter jets flying overhead. This image will forever be etched in my mind as the first time I saw our military in action. Up until then, my closest military interaction was hearing stories from my dad about my grandfather — a Marine aviator in WWII. Seeing those fighter jets, screaming across the sky to patrol the airspace over NYC gave me an intense feeling of pride. This sparked the beginning of my military journey.

In the weeks and months following 9/11, my community mourned along with the nation. My tiny borough of 4500 people in Northern New Jersey lost a handful of people; a woman on my street lost her son, one of my friends lost his uncle and my guidance counselor, Mrs. Dougherty, lost her brother — Vietnam veteran & NYFD Chief Firefighter, Peter Ganci. Chief Ganci was the highest ranking member of New York City’s Fire Department and decided to stay at his post in the basement of the North Tower even after they determined the tower was to collapse at any minute. Ganci ordered his men to evacuate but when asked to follow them to safety, he responded, “I’m not leaving my men.”

At that point in my high school trajectory, I had a very close relationship with Mrs. Dougherty. She was always rooting for me, even when I got in trouble with the principals or fell behind in my classwork. Experiencing the loss she felt, paired with the story of her brother’s heroism became another factor in my decision to join the military.

When junior year came just a few months later and my classmates were touring campuses and working with their guidance counselors to prepare applications for their dream colleges, I told Mrs. Dougherty I was going to do something different; I was going to join the Navy.

Her response was a mixed reaction of prideful surprise and confused trepidation; it was certainly the first time she had ever heard this from one of her students. My high school had a reputation of sending the vast majority of the graduating class right to college, with at least a handful to Ivy League schools, every year. The idea of sending one of her students into the military just as our retaliatory war was ramping up in Afghanistan was a troubling proposition. But she supported me, as she always had, and helped get me positioned to sign my contract with the U.S. Navy.

About half-way through my junior year, I made the trip to MEPS in Brooklyn, NY and signed-up as a Nuclear Reactor Operator; entering myself into the Delayed Entry Program. For the next year and a half, I finished high school while working with the Navy recruiters to prepare for what would become the next six years of my life. In June of 2004 I graduated and two weeks later was on a plane to Great Lake, Ill for Navy Boot Camp.

Throughout my time in the Navy, I would make trips back to New Jersey to meet with Mrs. Dougherty and the school’s staff. Even the principal that had issued me all those detentions and suspensions would beam with pride over the path I chose; the product of his care and thoughtful discipline. And after the Navy I finally made it to one of those Ivy League schools (Columbia) and graduated from NYU Film School; an outcome almost completely furnished by my military service.

The events on 9/11 changed all of us. It was a dark day filled with death and destruction and was a rude awakening to my generation of millenials. But many of us decided to join the military in response to that day and, for some, that decision has guided the course of our lives toward goals and accomplishments we never thought were possible. Before 9/11 I felt lost; like many of the office workers and business people who ran through the dust and debris blanketing lower Manhattan as the towers fell. But just as our country prevailed over this unprecedented attack on our way of life, I look back on 9/11 as the catalyst that sparked the growth that brought me to where I am today.

Augie Dannehl is We Are The Mighty’s Head of Production.