This Vietnam veteran found his Huey helicopter at the Smithsonian 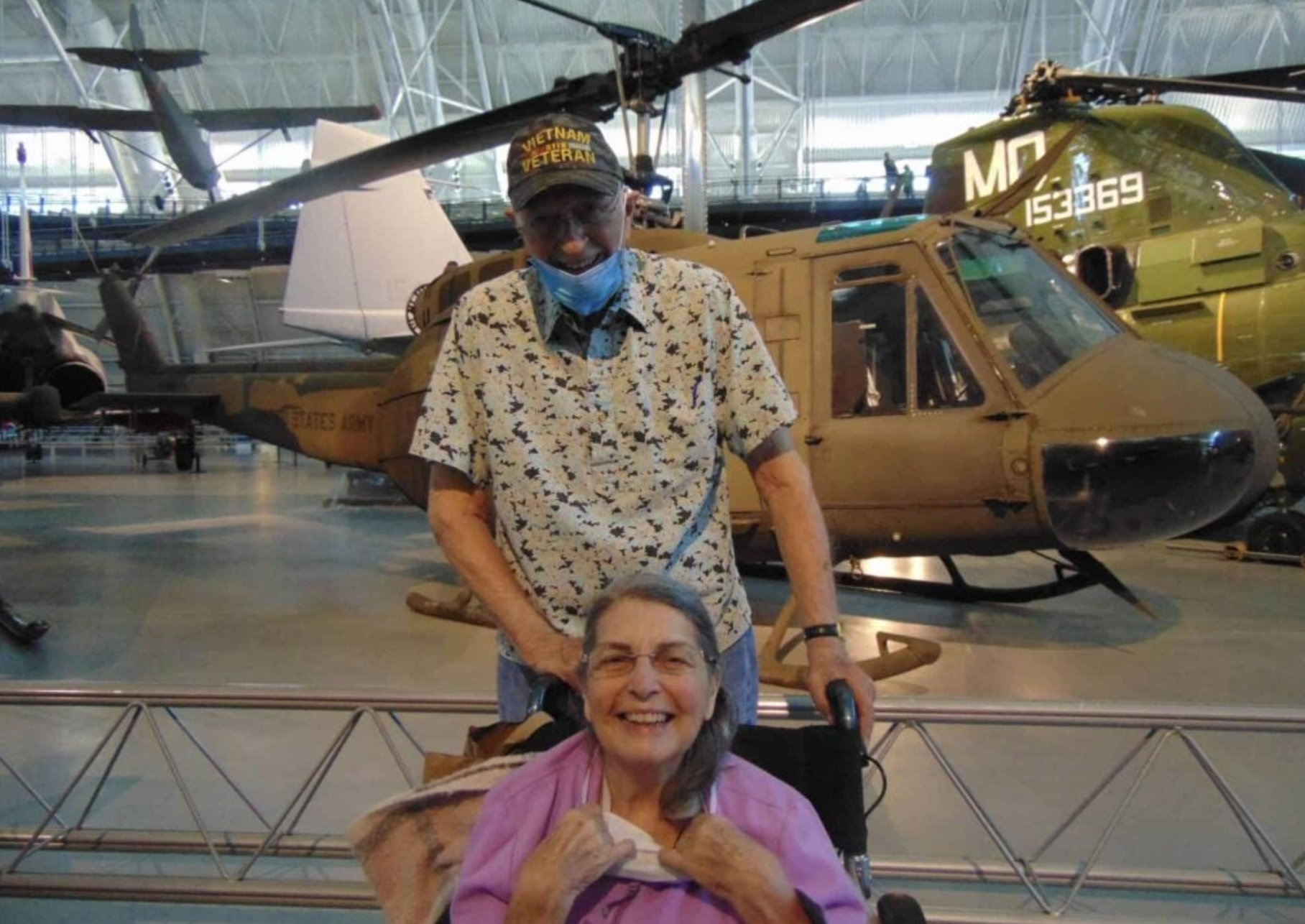 Raydean (85) and Mickey (83) at the Udvar-Hazy Center in front of Raydean's old Huey (IntegraCare/Hunters Woods at Trails Edge).

The Smithsonian Institution is the world’s largest museum, education and research complex. While they don’t own every piece of American history, they certainly own a lot of it. In fact, the Smithsonian Air & Space collection is so large that it was expanded from the main museum on the National Mall to include the Steven F. Udvar-Hazy Center annex at Washington Dulles International Airport in Virginia.

The Udvar-Hazy Center is a popular trip destination for the residents of the nearby Hunters Woods at Trails Edge senior living community. For Raydean and Mickey Patterson, who celebrated their 63rd wedding anniversary on September 9, 2021, the trip was extra special.

Raydean Patterson is a retired Army colonel and veteran of the Vietnam War. He served from 1958 to 1984 and flew the Bell UH-1 Iroquois, also known as the Huey, in Vietnam. Naturally, during the trip to the Udvar-Hazy Center, Patterson wanted to see the Smithsonian’s example of his old bird. What he didn’t realize is that the Huey on display there is, in fact, his old bird.

The museum displays the Huey with information detailing the aircraft’s history. Their UH-1 flew in Vietnam from 1966 to 1970. During that time, it flew with four units: Company A, 229th Aviation Battalion, 1st Cavalry Division; Headquarters Company, 11th Aviation Battalion; the 128th Assault Helicopter Company; and the 118th Assault Helicopter Company. “I read it and it said it came from the 118th aviation company,” Patterson told Reston Now. “Then, I said ‘I was in that company’ and I looked at the tail and there it was.” Patterson recognized the Huey’s tail number as the one he flew in Vietnam.

Patterson served two tours of duty in Vietnam for a total of 19 months. It was on his second tour, which included time with the 118th Assault Helicopter Company, that Patterson was wounded in his leg. “I was there [with the 118th] for like six months, so if it was there, I flew it,” he recalled. “We didn’t change planes too often, unless they’re a heap of a pile of nothing…and this was in pretty good shape.”

The reunion with his old warbird allowed Patterson to reminisce on his time in Vietnam. “Every morning or overnight when I would go out…I had this little diddy I’d say, ‘God, let me get through this one more time,'” he said. “Then, coming back, I’d say a bunch of thanks to God…We had a little help from above.” Serving as an aviator in Vietnam was a deadly job. The Huey was flown by all four military branches in Vietnam and 3,195 were lost, the majority of which were flown by the Army.

Although Patterson doesn’t miss combat, he does miss flying the Huey. “I had a warm feeling for that piece of metal. I liked flying it, though I didn’t like those guys shooting at us,” he said. “I wanted to go over there and crank the thing up and go take it for a ride.”