From a farm in Iowa to multiple tours in Vietnam, Dale Gardner shares his story - We Are The Mighty

From a farm in Iowa to multiple tours in Vietnam, Dale Gardner shares his story 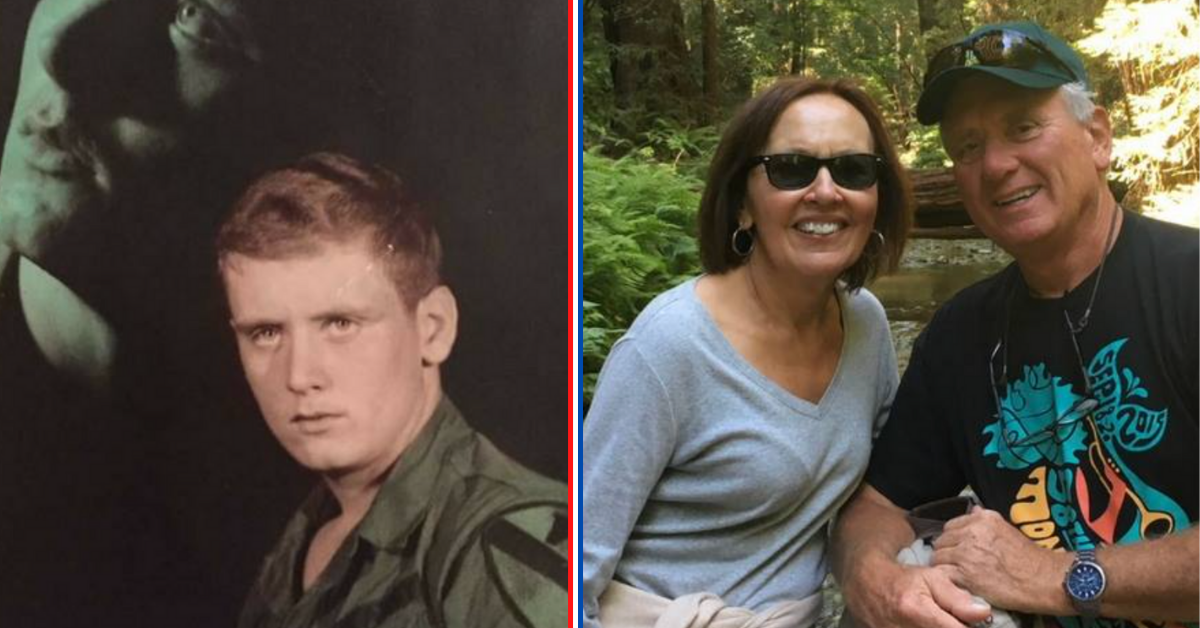 “I grew up on a farm in the little town of 800 people called Neola, Iowa. I was raised doing typical Iowa farm stuff. My dad was a farmer and my grandfather was a farmer. I graduated high school in 1969. I found myself unable to wrap my head around all that was high school – prom, pep rallies, football, girlfriends.

At the time of the Tet Offensive and afterwards, I think we were tagging and bagging guys in Vietnam at a rate of around 500 a week. I was appalled at that. High school didn’t do a whole lot for me, and I made up my mind that as soon as I graduated I’d join the military. As naïve as only someone from a town of 800 people in Iowa could be, I joined the Army in order to win the war in Vietnam. I joined in the delayed entry program, meaning I signed up in May and was supposed to report in September. I

showed up in Fort Polk, Louisiana, with a shorter haircut than they were giving – I was that gung-ho. I thought I was John Wayne. I went to Basic and then on to Advanced Individual Training (AIT). My attitude changed considerably after 16 weeks in the military. I hadn’t quite figured it out yet. Frankly, I was tired of being screwed with. They were used to people not wanting to be there and everybody got painted with the same brush. But I did want to be there. I made this friend in AIT from California – Steve McCauley. I’d been in the Army five days longer than him. A

fter we finished AIT we got a short amount of leave before we headed to Vietnam. Steve flew home to California to marry his girlfriend, Joan, and after I went home to see my family, I jumped on a plane to go see some friends in Santa Monica, and see Steve and meet his new wife. We were supposed to fly out of the Oakland Terminal. I called Steve and said I wasn’t ready to get on the plane the next day, and he wasn’t ready to leave Joan, so we decided not to go. We took about a three week hiatus. We were AWOL.

After three weeks, I called Steve and said, ‘We probably ought to go.’ We met up at the terminal in Oakland and flew back to check in. We didn’t really care that we were late – we had adopted this attitude of ‘What are they going to do, send us to Vietnam?’ We checked in and the guy looked at our orders and said, ‘You were supposed to be here three weeks ago. Where have you been?’ And we were honest. We told him we just didn’t feel like coming. We got sent to this room and there must have been 20 guys in there shooting the breeze. Steve and I walk in, thinking we’re in really deep kimchi, and then we start talking to these guys who were two YEARS late. So Steve and I are looking at each other thinking, ‘We’re probably going to be alright.’ We got busted back to E-1s, but we didn’t care.

A few days later we boarded a flight to Vietnam.

Vietnam was divided into Corps at the time. We flew into III Corps, and immediately got sorted and sent to where we’d be going. It seemed like everyone was being sent to 1st Cavalry division. I was sent to Alpha Company, 3rd Platoon. Steve was 2nd Platoon. Our MOS was the same: 1120 – infantryman. I got assigned to my unit, to a forward fire base in Song Be. I remember having a meeting with the 2nd LT, Jack Signor, and he told us, ‘The goal here is to stay alive.’ That started processing my thinking that nobody was there to win the war. We were just there to do our job.

The war was lost from a political standpoint – Walter Cronkite had already been on the news and said we’d lost the hearts and minds of America and the war.It was spring of 1970, when I started patrolling. I was carrying something like 75 high explosives in my pack. I was a walking bomb. Plus we were carrying claymores, plus shovels, plus meals and 15 quarts of water, plus poncho, plus personal gear … literally you couldn’t get up with your own packs, that’s how heavy they were.

This guy, Michael Brown, first helped me figure out how to put my pack on. He was just one of those helpful guys. There were about 110 of us in a company. Contrary to what you see in the movies, the dummies didn’t walk point. The experienced guys walked point. As we walked through the jungle, we’d walk in two columns; the columns about 10 meters apart, with about 5 meters between you and the guy in front of you, and the guy behind you. You can picture this: 100 guys walking five meters apart, two columns deep. You can imagine how long that strings out. At night you’d dig in; you’d circle the wagons, putting out claymore mines and trip wires in front of that, and that’s how you’d set up every night. That was our night defensive position.

A little over a week after I got there, we were on patrol one morning. The first platoon started out, and I was in third, so it was about 30 minutes before we were ready to start. It was just about our turn – we’re putting our packs on – and 1st Platoon starts getting shot at. Somebody called in the artillery, and they got the coordinates mixed up and started dropping on us. Luckily for me, I was still in my night defensive position, and as soon as the shooting started I made a beeline for the foxhole I’d slept in. Artillery rounds started falling all around us, and fillings literally fell out of my teeth. When they finally called it off, we got out of the foxholes and the medics started scrambling. Our squad leader was the first guy I saw. He was on his back and the medic was over him. He took a direct hit. The medic had tied shoelaces around his thighs. The sergeant’s legs were totally gone.

Michael Brown had taken some shrapnel, about the size of a fist that went through his back and came out through his front. The medic, who was a really good friend of his, was giving him CPR. I’ll never forget the sound. It sounded like when a kid is blowing up a balloon with a hole in it. His lungs had been shredded, and he was already gone. That was April 27, 1970. It was my 19th birthday. It was a fairly short firefight but we had all these wounded people. We were in the jungle and we found a few clearings. We had to get medevacs in there, and I was told that we needed to make a clearing. I grabbed a machete and there were people helping me and we cleared a spot for the helos to land. I got put in for an Army Commendation Medal for that. I thought it was ridiculous. What’s heroic about clearing bamboo? It wouldn’t even register for me that you wouldn’t do that.

It’s said sometimes – and correctly so – that being an infantryman is mostly boredom. I’d agree. It’s sheer boredom punctuated by moments of sheer terror. On April 30th, three days later, much to my mother’s horror back in Iowa, Nixon informed the United States that he was sending the 1st Calvary Division to Cambodia. This insurgence into Cambodia was only supposed to last 60 days. A helicopter came and dropped maps and we packed up. That’s when it really got fun. It was pretty crazy.

When I first got to my platoon, I was the newest guy there. Three months later, I was the third oldest. That gives you an idea of what was going on. We found the largest cache of weapons ever recovered. We hauled stuff out of there for two weeks. It was just crazy. In the course of this, the Army had a new problem. It was mostly big city kids from Chicago and North Philly who had said, ‘I’m not going to Cambodia. I said I’d do Vietnam, but not Cambodia.’ So the Army’s response was to send anybody not willing to go to Cambodia to jail. This went on for a while and they meant it. I was too naïve (maybe too afraid) so I didn’t push back. I didn’t join the Army to go to jail for not obeying orders. But it became a huge problem, so the Army said to everyone, ‘Okay, you don’t want to be in the field anymore? We’ll tear up your existing contracts and we’ll write you a new contract for any job you can be trained for in Vietnam for three years.’ As long as you had been in the Army for eight months, you were eligible. It was a good deal.

Special services needed somebody, which was stuff like escorting USO tours, showing movies to troops, handing out baseball bats and balls — and that was definitely the job for me. Remember my friend Steve I told you about? He took the deal, too. But I’d been in five days longer, so he had to stay five extra days in the field. And it sounds like a movie … but in those five days he got killed. They were out, they got ambushed, he went running and hit a tripwire for a B-40 rocket that was booby trapped in a tree. He was sprayed with shrapnel, and it perforated his lungs. It was a very survivable injury, but it just so happened to be one of those monsoon afternoons, and they couldn’t medevac him. He died at two in the morning. I wrote his wife, Joan, and the Army gave me 30 days of leave to fly back to see her. I stopped in Iowa to see my family on my return, and then I flew back to Vietnam for another two years.

I made a deal when I got back to Vietnam that I would extend an extra six months if they’d put me on duty as a lifeguard at one of the pools. They did, and I stayed until my time was up. When I got home, I found and married this wonderful girl, Lindy – a social worker – from South Dakota. For our honeymoon we rode a motorcycle from Omaha, Nebraska to just south of Mexico City. We’ve been married over 40 years. That’s the girl I married – a girl who would get on the back of a motorcycle. She’s always been a partner. We moved to Alaska and raised our kids there. We lived there for almost 30 years. We eventually got tired of the cold and moved to Mexico, to a spot we found on our honeymoon. People make this quintessential caricature of Vietnam Veterans as someone who is a drain on society and we should pity him. By and large, that’s not us. The typical Vietnam Vet is me. A kid from a family whose attitude was, ‘Get up every day and if you do nothing else, don’t be a part of the problem.’ We aren’t poor loss souls. We are successful businessmen, we are dads, and we are proud of our service.”