Today in military history: Apollo 13 returns to earth - We Are The Mighty 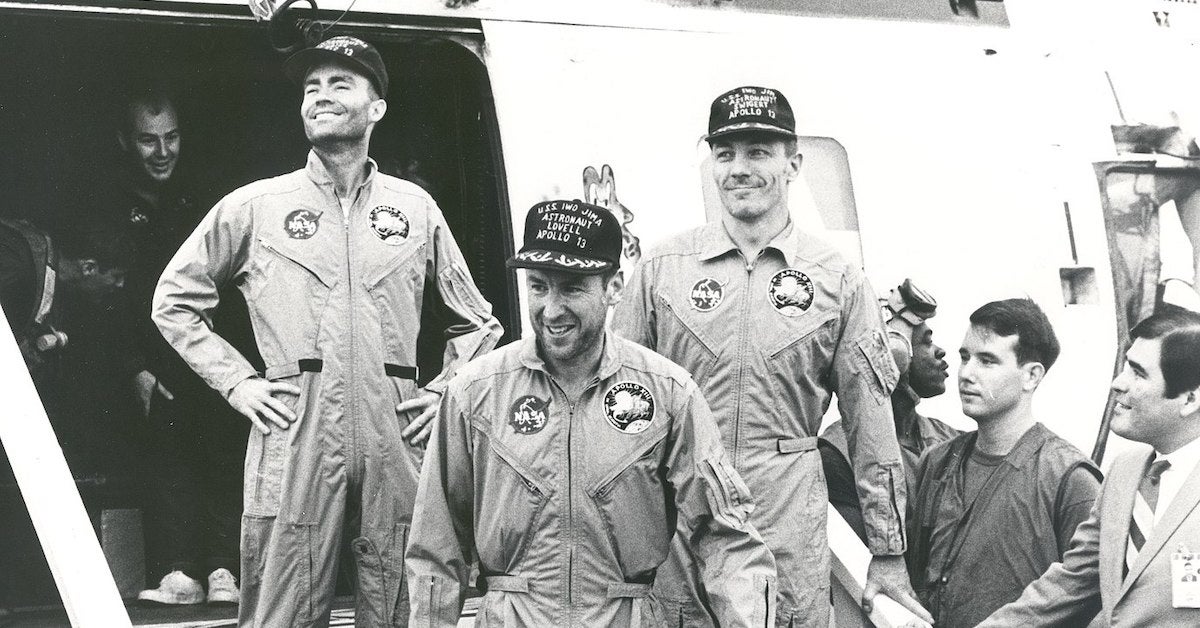 On April 17, 1970, the Apollo 13 spacecraft safely returned to earth after suffering major malfunctions on its journey to the Moon.

200,000 miles from Earth, three astronauts and veteran test pilots were scrambling to adapt and overcome a seemingly impossible challenge. They were James Lovell — a Navy Captain and test pilot; Jack Swigert — a fighter pilot in the Air National Guard; and Fred Haise — a fighter pilot in both the Marine Corps and Air Force.

Two days into their mission to the Moon, an oxygen tank exploded, severely disrupting their supply of oxygen, electricity and water. They aborted their landing mission, and scrambled to implement creative and improvised solutions suggested by the support staff back in Houston.

They’d have to improvise a way to make a square filter fit into a round hole. They’d conjured up a makeshift lifeboat.

The support staff no longer cared what the spaceship had been designed to do – they had to figure out how to squeeze every bit of capability from the vehicle.

Overcoming nearly impossible odds, the crew guided the spacecraft back to earth, reentered the atmosphere and touched down in the Pacific Ocean, where they were recovered by the amphibious assault ship USS Iwo Jima.

Featured Image: The crew of the Apollo 13 mission step aboard the U.S.S. Iwo Jima, prime recovery ship for the mission, following splashdown and recovery operations in the South Pacific. Exiting the helicopter, which made the pick-up some four miles from the Iwo Jima are (from left) astronauts Fred W. Haise, Jr., lunar module pilot; James A. Lovell Jr., commander; and John L. Swigert Jr., command module pilot. The Apollo 13 spacecraft splashed down at 12:07:44 pm CST on April 17, 1970. (NASA Image)