Today in military history: First ‘Unknown Soldier’ selected for Tomb - We Are The Mighty 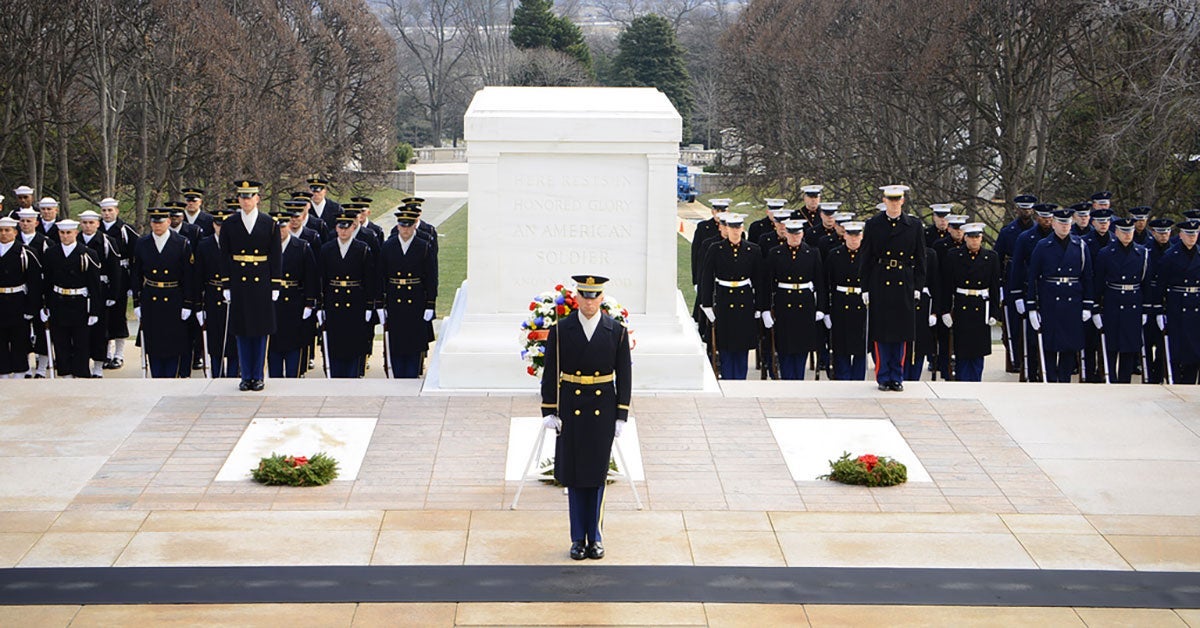 On Oct. 24, 1921, U.S. Sergeant Edward Younger selected the body of the first “Unknown Soldier” to be honored from World War I.

The Tomb of the Unknown Soldier has been guarded twenty-four hours a day since 1937 by the Old Guard, the oldest active infantry unit in the United States military.

On Memorial Day of 1921, four unknowns were exhumed from four World War I American cemeteries in France. On Oct. 24, Younger selected the Unknown Soldier from four identical caskets by placing a spray of white roses on one.

He chose the third casket from the left, and the soldier within was transported to the United States aboard the USS Olympia to his final resting place at Arlington National Cemetery near Washington, DC.

After the end of World War II, it was time to begin the selection process anew in order to honor those who fell. Unfortunately, the Korean war had also reared its ugly head, postponing the process. It wasn’t until 1958 that proceedings resumed.

On May 15, 1958, four unknown heroes were placed in identical caskets before Master Sgt. Ned Lyle, a Distinguished Service Cross recipient who had proved his valor in Korea. It was up to him to select the soldier to be entombed and represent those lost in the Korean War.

The decorated master sergeant placed a wreath atop his selection, followed by an honorary hand salute.

The third unknown soldier, who would symbolize those lost in World War II, was selected aboard the USS Canberra just 11 days later. Hospital corpsman and Medal of Honor-recipient William R. Charette made the final selection.

The unknown soldier from the Vietnam War was selected by Medal of Honor-recipient Sgt. Maj. Allan Jay Kellogg Jr. during a military ceremony at Pearl Harbor in 1984. The unknown arrived at Arlington National Cemetery on Memorial Day, May 28, 1984.

President Ronald Reagan presided over the funeral and awarded the unknown with the Medal of Honor.

In 1998, the body was exhumed and the DNA was tested. The body was later identified as Air Force 1st Lt. Michael Joseph Blassie, who was shot down in Vietnam, 1972.