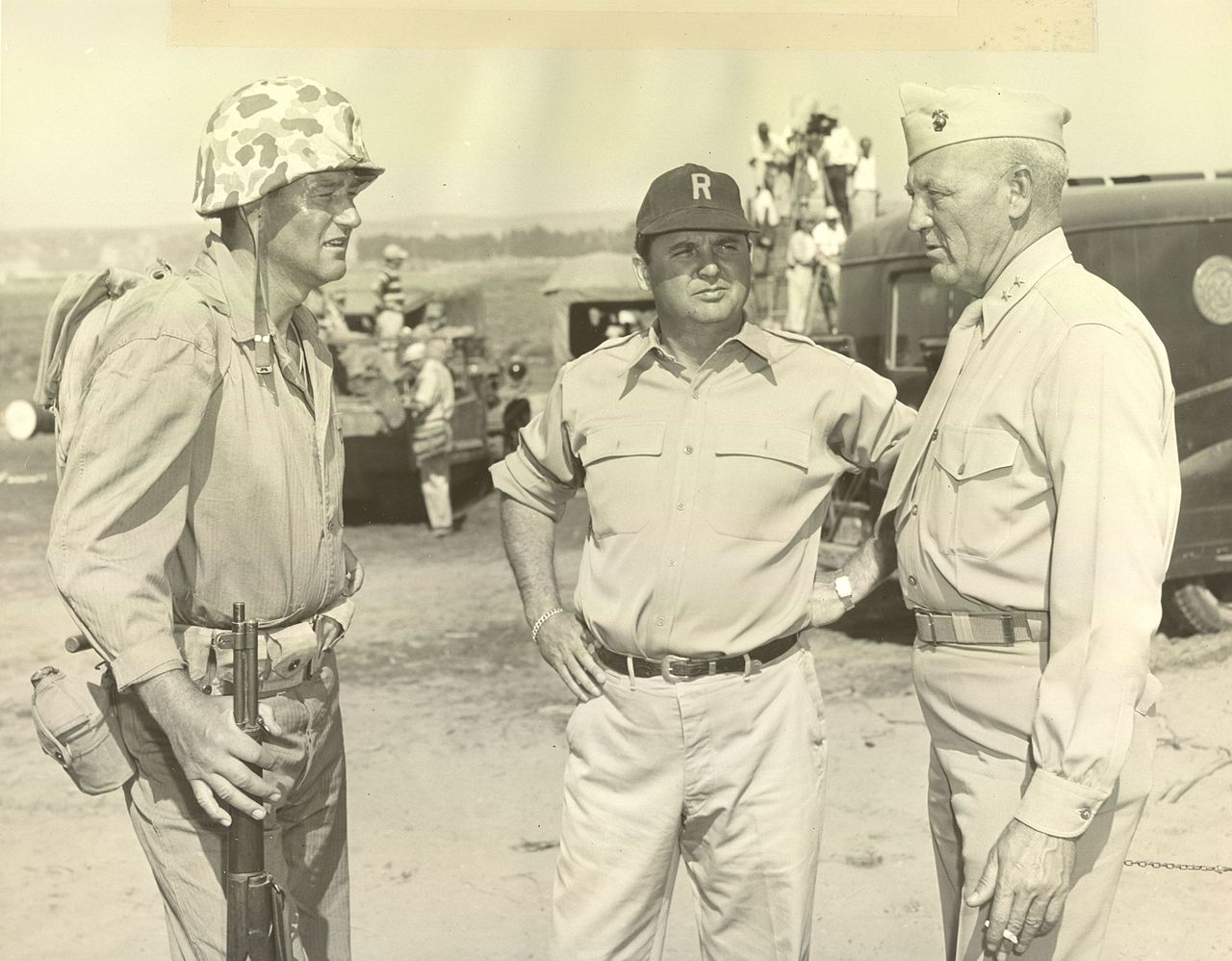 Major General Graves B. Erskine talks with John Wayne during the filming of Sands of Iwo Jima. (USMC photo).

On Nov. 9, 1921, the steamer USS Olympia sailed into Washington Navy Yard. Aboard the storied ship were 39 United States Marines. Its leader, Captain Graves B. Erskine was as salty as they came by then, and had a lot more years left in him.

The ship and its Marine detachment were escorting the Unknown Soldier of World War I from Le Havre on a trip that was as trying and difficult as anything Capt. Erskine had done up until that point. By the end of his time in the Marine Corps, his career would be almost as storied as the USS Olympia.

By the time he’d boarded the Olympia with his Marines, the ship had already seen combat as Commodore George Dewey’s flagship in the Battle of Manila Bay, patrolled the American East Coast during World War I, and ferried American troops to Russia during the Polar Bear Expedition.

Carrying the Great War’s unknown soldier home for the last time would be the Olympia’s crowning achievement, but it wouldn’t be easy. Capt. Graves Erskine, not knowing the dangers of the trip ahead, would come face-to-face with that difficulty.

Erskine cut his teeth in combat on the American border with Mexico, fighting bandits and rebels who were raiding American towns as a soldier in the Louisiana National Guard. When World War I broke out, he joined the Marine Corps and sailed for France with the 6th Marine Regiment.

As a Marine in the American Expeditionary Force, he fought at the Battle of Chateau-Thierry, Belleau Wood, and the St. Mihiel Offensive. There, he was so wounded that he had to be sent back to the U.S. to recover. Gen. John J. Pershing himself cited Erskine’s Silver Star medal.

Shortly after the Great War ended, Erskine, then a captain, had the honor of leading the Marines escorting the Unknown Soldier home. With the coffin lashed to the deck of the ship Erskine had his Marines stand four-hour watches. Soon the ship hit stormy weather.

It wasn’t just any storm, however, it was one of the largest hurricanes to ever hit the continental United States. It killed eight people and caused $10 million in damage (more than $165 million in today’s numbers). As Marines were swept across the deck, tying themselves to the rails, and watching their boots swept overboard, they never left their watch.

When the Olympia arrived in Washington, the Marines had enough time to polish their shoes and their brass before carrying the casket to the U.S. Army’s awaiting funeral caisson. As one team of Marines carried the remains of the Unknown Soldier, the rest saluted and fired off a volley of salute.

Erskine’s career as a Marine was young, despite being seriously wounded in the greatest war the world had ever known until that point. It would continue with the young officer in a Marine Corps uniform. He would spend the interwar years fighting in the jungles of Nicragua, Haiti, and the Dominican Republic.

Then, World War II broke out. Erskine was promoted to Brigadier General, where he would oversee the training and preparation of dislodging the Japanese invaders of the Alaskan Aleutian Islands. He went further west, participating in the invasion of the Marianas Islands of Kwajalein, Saipan, and Tinian.

He would remain in the Corps until 1953 as a Lieutenant General, but would retire as a four-star General. It was a special recognition for his heroism under fire and his nearly 40 years of service.