How the Vietnam War’s ‘Unknown Soldier’ was identified and reinterred 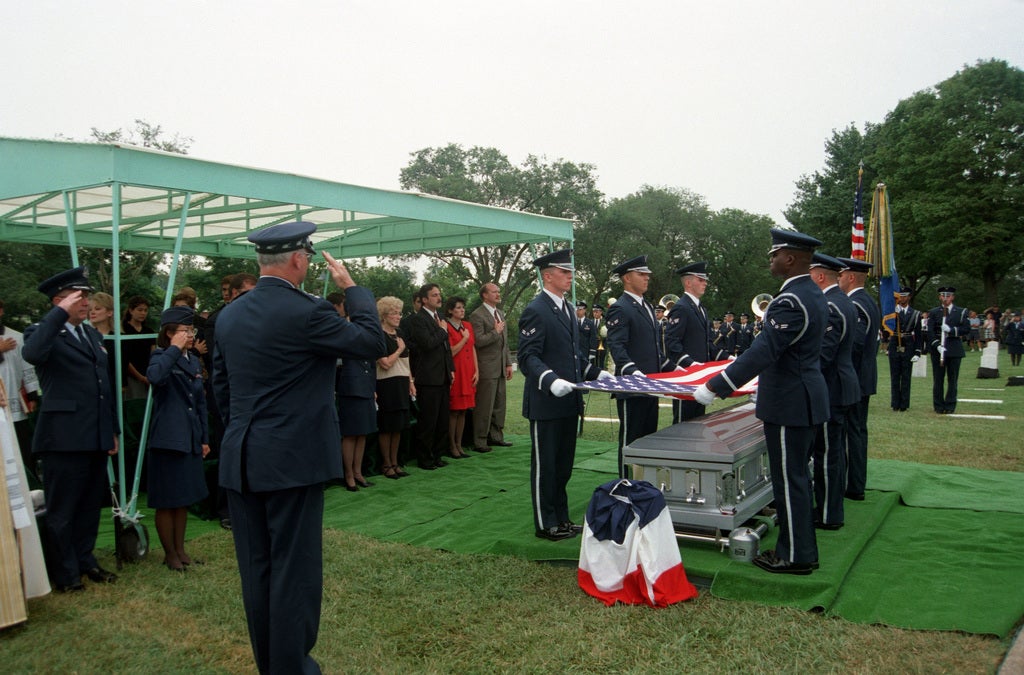 Members of the USAF Honor Guard prepare to fold the American flag, which will be presented to the family of USAF Lieutenant Michael Blassie, during the funeral service at Jefferson Barracks National Cemetery. Lieutenant Blassie was killed in action while flying a mission over South Vietnam. Lieutenant Blassie's remains have been returned to his family after lying unidentified for fourteen years in the Tomb of the Unknowns.

It should not have been a case of mistaken identity. When Michael Blassie’s remains were first found by South Vietnamese soldiers, they found his ID card, wallet, dogs tags and personal photos along with it. Yet not long after, he morphed into an unknown soldier.

When his remains were finally turned over to a U.S. military mortuary and sent to Hawaii for confirmation, they were confirmed to be those of Lt. Michael Blassie. Somewhere along the way, however, someone determined that the projected height and age couldn’t be those of the missing Air Force pilot.

They were reclassified as unknown, and stated that way until 1988, 16 years after he was killed.

Blassie was an Air Force A-37 Dragonfly pilot, serving with the 8th Special Operations Squadron in Vietnam. He was shot down by the North Vietnamese over An Loc in the Bình Phước Province of Vietnam. He was 24 years old and not found immediately. At the time, An Loc was controlled by enemy forces.

Blassie’s body was found at the crash site five months after he was shot down when a South Vietnamese Army patrol recovered it. From the scene, it was clear the pilot was American. With the personal effects already mentioned, came part of a uniform and a sidearm holster. Only scattered bone fragments remained of Blassie.

The South Vietnamese turned his remains over to the Americans. But despite the evidence found at the crash site, and that only one crew member flew in the A-37B Dragonfly, the U.S. Army Central Identification Laboratory in Hawaii analyzed the remains and concluded that they were likely not Blassie.

Based on the likely age and height of the remains alone, the lab couldn’t confirm it was Blassie. At the time, fingerprint and dental identification, along with forensic anthropology and radiology were used to determine identity. These methods are not always conclusive. Blassie was redesignated as “unknown, number X-26.”

In 1984, his remains were laid to rest in Arlington National Cemetery’s Tomb of the Unknowns after lying in state in the U.S. Capitol. President Reagan presided over the funeral and awarded him the Medal of Honor. Reagan accepted the folded flag as the Vietnam Unknown’s next of kin.

For four years, Blassie was guarded day and night by the tomb sentinels and visited by thousands of tourists in the DC area. But in the mid-1990s, news reports began to surface about the personal effects found with the remains, and word got back to the Blassie family that the “unknown” might be their loved one. They petitioned the government to perform more advanced tests.

By then, those tests included DNA testing, specifically mitochondrial DNA testing that could be compared with the DNA of his still-living mother and sister. When the tests were compared with X-26, they found a match. The unknown was unknown no more.

By 1998, Michael Blassie was reinterred in Jefferson National Cemetery near his hometown of St. Louis, Missouri, the same cemetery in which his father was laid to rest.

The Tomb of the Unknowns is still the final resting place of unknown troops who died in World War I, World War II, and the Korean War. But without having a clue as to who they are, there can be no DNA to compare them. They will likely remain unknown.