Did you know Ronald Reagan served on active duty during WWII?

Did you know this president served on active duty during WWII? 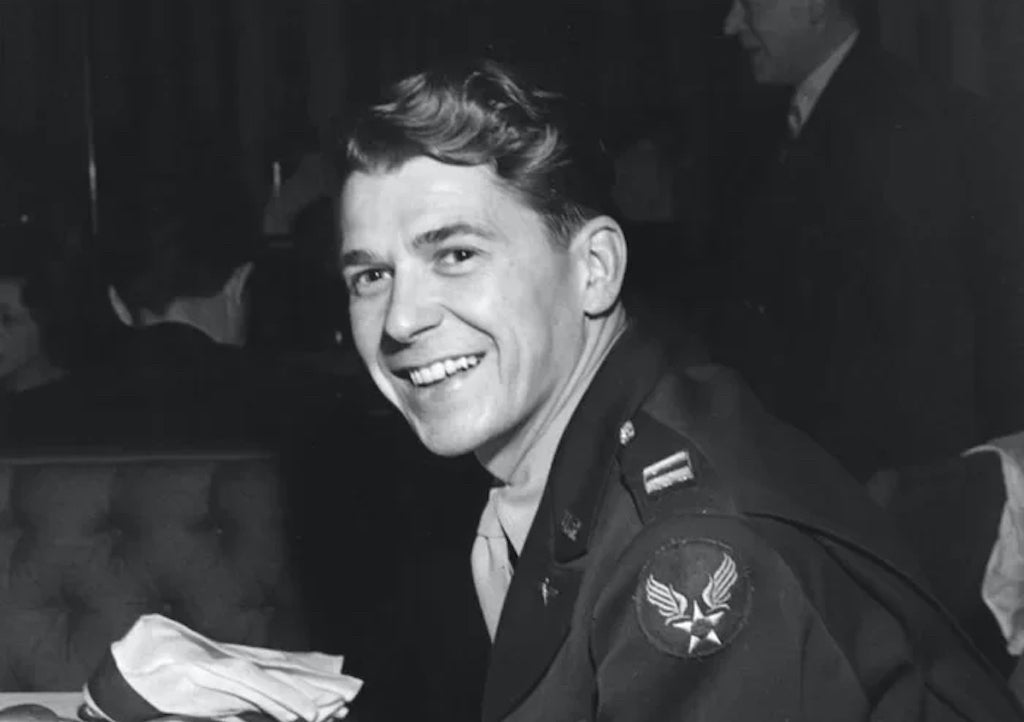 The World War II saw a total mobilization of the United States. Every facet of the country was directed to fighting and winning the war. This included Hollywood as many actors like Jimmy Stewart and Henry Fonda raised their right hands, donned the uniform, and served with distinction. Another actor of the era named Ronald Reagan would go on to become the nation’s 40th President and Commander-in-Chief. Rather less known is the fact that Ronald Reagan did serve in the Army during WWII.

Although he is strongly associated with California as a result of his Hollywood career, governorship, and post-presidency ranch, Reagan was born in the village of Tampico, Illinois. He graduated from Eureka College where he played football in 1932 and worked as a radio sports commentator in Iowa before moving to California in 1937. There, he found success as an actor and appeared in several major productions. Interestingly, his Army service predates his arrival in Hollywood.

On March 19, 1935, Reagan enrolled in a series of home-study Army Extension Courses. He completed 14 courses before he enlisted in the Army Enlisted Reserve on April 29, 1937. As a private, Reagan was initially assigned to Troop B, 322nd Cavalry in Des Moines, Iowa. That’s right, Ronald Reagan was a cavalryman. Later that year, on May 25, he was appointed 2nd Lieutenant in the Officer Reserve Corps of the Cavalry. The next month, Reagan made the move out to California. On June 18 that same year, he accepted his Officer’s Commission and was reassigned to the 323rd Cavalry.

On April 19, 1942, Lt. Ronald Reagan was ordered to active duty. Because of his poor eyesight, the actor was restricted to limited service and excluded from going overseas. With plenty of work to be done stateside in support of the war effort abroad, Reagan’s first assignment was at the San Francisco Port of Embarkation at Fort Mason, California. There, he served as liaison officer of the Port and Transportation Office.

On May 15, 1942, at the request of the Army Air Forces, Reagan applied for a transfer from the Cavalry to the AAF. The transfer was approved on June 9 and he was assigned to AAF Public Relations. Taking advantage of his Hollywood experience, the AAF detailed Reagan to the 1st Motion Picture Unit in Culver City, California. The next year, on January 14, 1943, Reagan was promoted to 1st Lieutenant. The promotion came with a reassignment to the Provisional Task Force Show Unit of This Is The Army at Burbank, California. After completing this assignment, Reagan returned to the 1st Motion Picture Unit and was subsequently promoted to Captain on July 22, 1943.

In January 1944, Capt. Reagan received temporary duty orders to New York City to participate in the opening of the sixth War Loan Drive. After returning from his TDY, Reagan was assigned to the 18th AAF Base Unit in Culver City, California. He remained with this unit until the end of the war. During his time on active duty, Reagan served as a personnel officer, post adjutant, and even as an executive officer. By the war’s end, he had also helped to produce around 400 AAF training films. Although he was recommended for promotion to Major on February 2, 1945, the promotion was denied on July 17 that year. On September 8, with the war over, Reagan reported to Fort MacArthur, California where he was eventually separated from active duty on December 9, 1945.

After leaving active duty, Reagan returned to Hollywood full-time but retained a Reserve Commission. He even simultaneously served as president of the Screen Actors Guild from 1947 to 1952. It wasn’t until April 1, 1953 that his Reserve Commission was terminated. Of course, Reagan would return to lead the armed forces as Commander-in-Chief when he was sworn in as President of the United States on January 20, 1981.