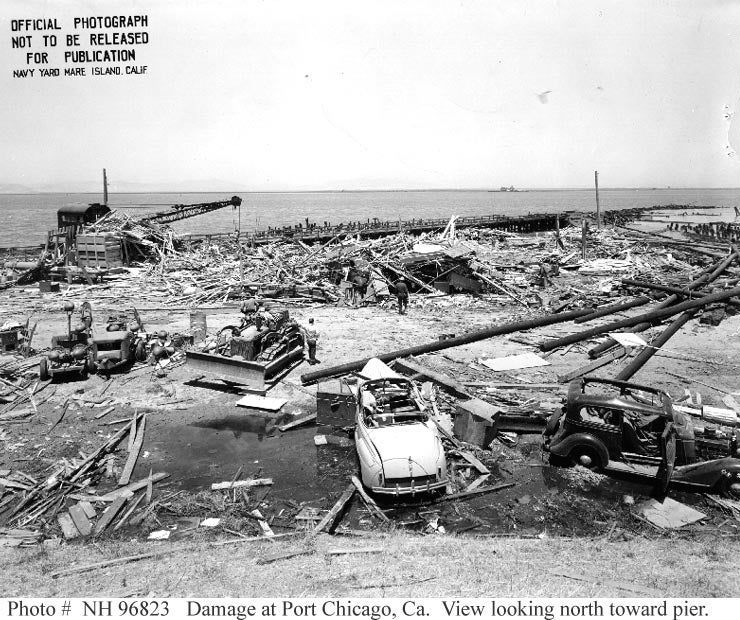 Actor, singer, songwriter Harry Belafonte is one of the most successful Jamaican-American pop stars. Moreover, he is a political activist who has worked to advance the Civil Rights Movement with other famous Americans like Martin Luther King, Jr. and Sidney Poitier. Like Poitier, Belafonte also served in the military during WWII.

In 1944, Belafonte dropped out of high school in New York City to join the war effort. He enlisted in the Navy and was assigned to Port Chicago, California near San Francisco. During WWII, the military remained segregated and African Americans were not generally allowed in combat roles. Rather, they were mostly relegated to support roles. Belafonte’s job was to load ships at the port bound for the Pacific theater.

Just before he arrived aboard the base, Port Chicago suffered a massive disaster on July 17, 1944. While munitions were being loaded onto a cargo from the Port Chicago Naval Magazine when an explosion rocked the pier and engulfed it in flames. Thousands of pounds of bombs, shells, depth charges, and fuel erupted in two shock waves that were felt by seismographs at the University of California, Berkeley. The second, larger shock wave was equivalent to a 3.4 magnitude earthquake.

320 men on duty at the pier died instantly in the horrific explosion. 202 of the fatalities were Black service members. This accounted for 15% of Black casualties during the war. A further 390 civilians and military personnel were injured, 233 of whom were Black.

A number of factors contributed to the Port Chicago disaster. First, the enlisted sailors serving a dockworkers had not been instructed in safe ammunition loading. Second, the port commander and his loading officers had no training in loading munitions and had very little experience handling them. Third, the rapid pace of loading on the dock put heavy strain on the winches which required regular maintenance that was often neglected. Finally, the commander established a competition for crews to load the most tonnage during their shifts. While this was not necessarily unsafe, it was later viewed as irresponsible considering the lack of training in handling munitions. Moreover, the white loading officers tended to push their Black sailors harder as they had placed unsanctioned bets on the speed and tonnage competition.

Despite the tragedy, safety regulations at Port Chicago were not changed. Combined with the segregated environment, Black sailors refused to continue loading munitions in what became known as the Port Chicago mutiny. Fifty sailors were convicted of mutiny and sentenced to the brig. Most of these men were not released until months after the end of the war. “The Port Chicago mutiny was one of America’s ugliest miscarriages of justice, the largest mass trial in naval history, and a national disgrace,” Belafonte later said.

The Port Chicago disaster received very little media coverage. The Pittsburgh Courier, a national newspaper read primarily by African Americans, covered the explosion and the subsequent mutiny trial. In the aftermath of Port Chicago, a race riot broke out at a naval base in Guam as well as a hunger strike at Naval Base Ventura County in Port Hueneme, California. In 1990, a congressional campaign was unsuccessful in exonerating the 50 convicted Black sailors.

Also during the 1990s, Freddie Meeks was urged to petition for a presidential pardon as one of the few surviving convicts. Others of the Port Chicago 50 refused to seek a pardon on the grounds that a pardon is forgiveness for guilty people whereas they maintained their innocence. Meeks pushed for the pardon as a way of telling their story and bringing attention to the injustices they faced in the trial and during their service. President Clinton pardoned Meeks in December 1999. That same year, Turner Classic Movies aired the historical documentary The Port Chicago Mutiny which Belafonte praised. Efforts to exonerate all of the Port Chicago 50 continue to this day.