The world’s top geopolitical risks in 2023, according to experts

The world’s top geopolitical risks in 2023, according to experts 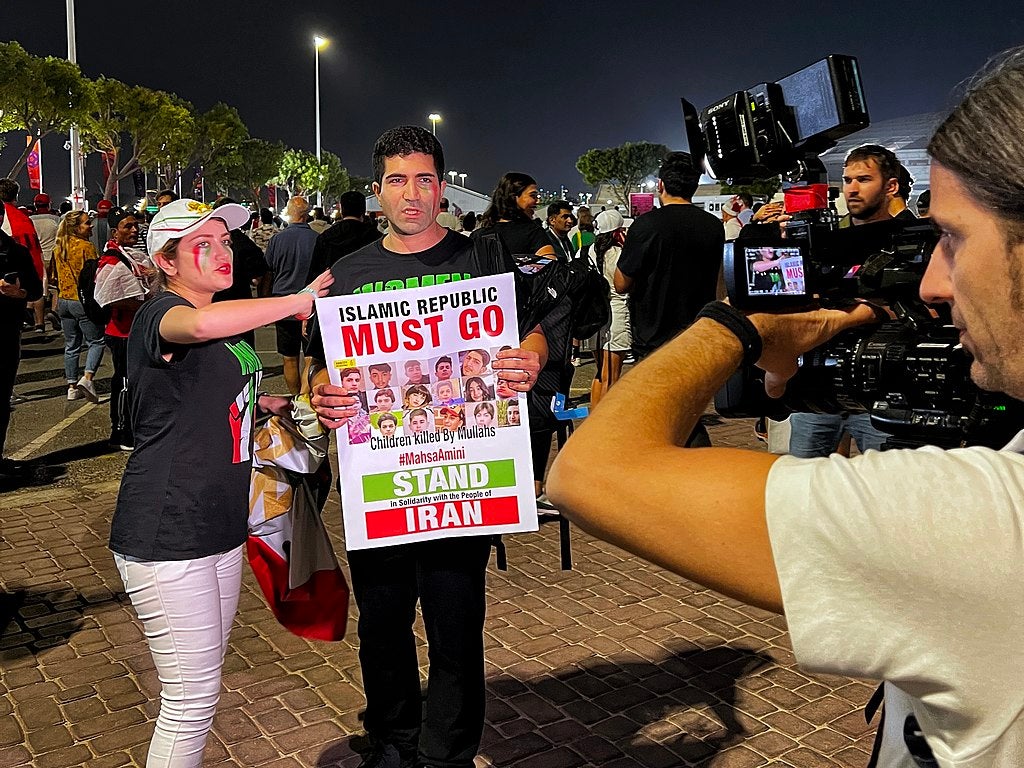 An Iranian fan with a protest banner at the 2022 World Cup.

Eurasia Group, founded in 1998 by geopolitical expert Ian Bremmer, brings the world of business and investment to the outlook on world politics. Political scientists, risk analysts and consultants inform investors and the world’s business decision-makers on how to make sense of a rapidly evolving world.

Every year, the consulting agency compiles its list of the world’s top geopolitical risk factors using unfolding events, expert analysis, and leaders with real-world experience in the business arenas and beyond. While there is a lot to be optimistic about in the world today, there is still much cause for concern.

Here are the top five geopolitical risks from Eurasia Group for 2023:

Russian troops are being spanked on the battlefields of Ukraine while Russia and its president face worldwide embarrassment for their failure. In 2022, Eurasia Group says Putin managed to keep the fighting contained in Ukraine. This year, the group believes, Putin may expand the war to win territorial concessions and deter Ukraine from recapturing the Crimean Peninsula.

This doesn’t mean picking a fight with NATO, but it could mean using its still-considerable resources and reach to take some cues from Iran’s playbook and work to destabilize other areas of the globe. Putin could threaten to use nuclear weapons while conducting cyberattacks, sabotage natural gas flows and internet cables, and even assassinate Western officials in an attempt to sabotage Ukraine’s recovery and splinter the alliance.

In October 2022, the Chinese Communist Party handed President Xi Jinping more power entrusted to any one person in the country since Chairman Mao took over in 1949. This means that he can continue China’s worldwide initiatives, many of which are non-military. But it also means more room for mistakes in its military endeavors.

China did make a number of critical mistakes in 2022. Its zero COVID policy hurt the economy while making the population more vulnerable to the disease, a crackdown on private tech firms caused investor fears cost the country $1 trillion in investment and his declaration of friendship with Putin lent legitimacy to the War in Ukraine. All of these might have been mitigated if more voices were heard in the decision-making process, but they weren’t and will be less likely in the future.

While disruptive technologies are usually considered a good thing, they can be used by those with bad intentions for terrible results. Things like deepfakes, facial recognition, and voice synthesis will be used to undermine foreign democracies and squash dissent inside dictatorships. Russia will use this tech to target populations inside Ukraine while China will use it to tighten security inside the People’s Republic. Who knows what the far-reaching consequences could be?

Inflation shockwaves hitting worldwide markets are not expected to decline in 2023, and some in the European Central Bank believe the shocks of 2022 were only the beginning. If the world enters a global recession, populations will experience extreme financial distress which could lead to discontent and political instability all over the globe.

No matter what anyone says to the contrary, there’s no single cause of inflation. Not Joe Biden, not just COVID-19 economics, and not just the War in Ukraine. It all adds up to strains on global supply chains. The United States led the attack against inflation with aggressive action and the world followed suit, but everyone is still feeling the pinch as real incomes dwindle, adding pressure to governments the world over.

It’s unlikely the Iranian regime will fall anytime soon, but nationwide anti-government protests have reinvigorated movements against the regime, prompting Iran to supercharge its nuclear development program. The government cannot crush the decentralized movement, but it is calling for an end to the power of the clerics.

Meanwhile the regime has produced enough nuclear material to make a nuclear weapons in a matter of weeks, highlighting the failures of Western powers to deter its efforts. The threat of a nuclear weapon, its domestic repression and its continued material support for Russia in Ukraine could mean a confrontation to decisively end the threat from both Israel and the United States.