10 indicators the US Marine Corps is a cult 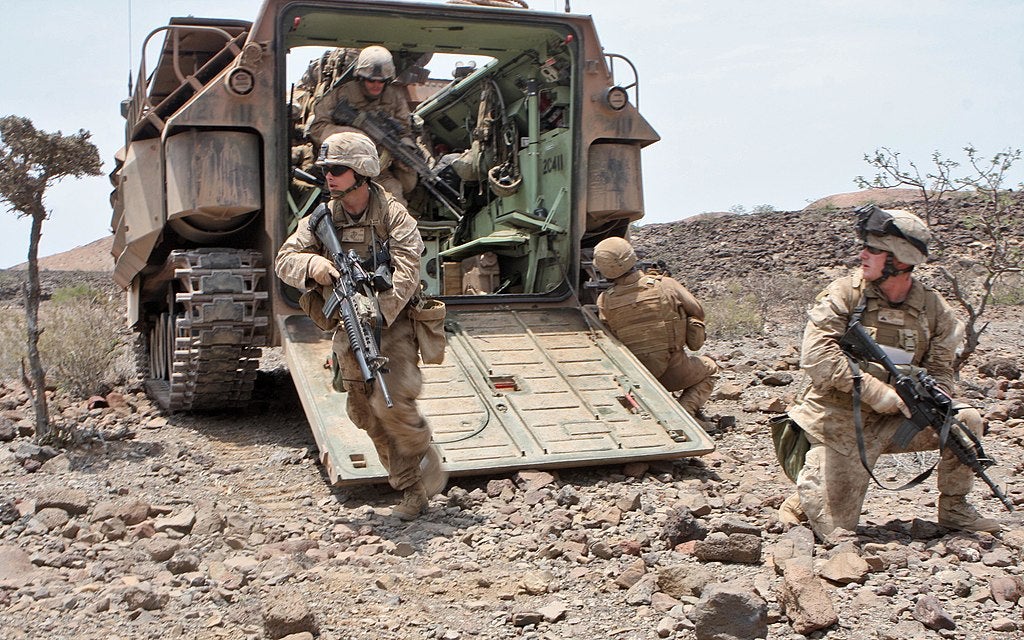 The emblem of the U.S. Marine, the Eagle, Globe, and Anchor (also referred to as the EGA) was adopted in 1848 by Brigadier General Jacob Zeilin. Upon conclusion of the arduous 54-hour Crucible at the end of Recruit Training, each new Marine is handed an EGA by his/her Drill Instructor in an emotional and symbolic ceremony where they are addressed as “Marine” for the first time.

The EGA is on everything in the Marine Corps, seriously everything. A quick glance at a Marine in cammies (better known as the MCCUU – Marine Corps Combat Utility Uniform) will show an EGA embroidered on the cover (hat) and on the left breast pocket (over the heart), stamped into the leather on the boots, and embedded into the camouflage pattern (known as MARPAT – Marine Pattern). The EGA will also be found on the doormat in front of the hatch (door), on the bulkhead (wall) in the office, and on every piece of correspondence in circulation. Every U.S. Marine has an EGA sticker of some sort on his/her vehicle.

OORAH, sometimes pronounced Errah, or simply a short Urr, sometimes even an abbreviated ‘rah, defies a coherent definition. Amazingly, it is implicitly understood by every member of the cult. Marines are exposed to this mantra while still teenagers who are drawn to the recruiter like a moth to the flame. Oorah can be a genuine expression of enthusiasm (which is what the Marines actually mean when they excessively use the word “motivation”), or it can be a cynical response of one accepting an unsavory task or disappointing news (“Your deployment’s been extended.”). Sometimes it is used as a greeting, an acknowledgement of understanding, or even in place of the phrase “excuse me”. The habitual use of the “word” becomes fused within the DNA of a U.S. Marine. Years after service a Marine veteran will blurt out an Oorah at any event that elicits excitement whether a fireworks display, receiving a pay raise or the birth of a child. Oorah!

Even members of the other services will grudgingly admit that no uniform looks better than the dress blue of a U.S Marine. It has changed very little over the decades, just take a look at the black and white photos of the legendary Marine Gunnery Sergeant Dan Daly. Many Marines will admit they joined for the uniform and the belief in its ability to provoke romantic relationships. No one tells the Marine that they generally only wear it one day a year.

Nonetheless, it is the uniform all Marines past and present want to be buried in. Ceremonial occasions often arise where Marines are required to wear the Dress Blue Delta Uniform. It consists of blue trousers (with a red stripe), a khaki shirt (with olive colored chevrons) and a white cover (hat). Timeless but certainly not fashionable. The appearance is akin to getting leftovers in the dress up trunk of a kid’s room. Marines, oblivious to fashion, are confident this looks both sharp and professional.

There was near mutiny in the ranks in the early 2000’s when the Marine Corps transitioned from the woodland camouflage pattern and black boots to the MARPAT and “coyote tan” boots. The new uniform did not require boots to be spit shined, nor the cammies to be starched and ironed. After a record high case of heart attacks among the Staff NCO corps, order was restored once all hands discovered the new uniform was saturated with an overabundance of EGAs.

Marines pride themselves in their austerity, their ability to thrive in Spartan conditions, with inferior, or outdated equipment. They are oblivious to their own martial poverty. Phrases like “do more with less” even make it into testimony before Congress resulting in the Marine Corps continually getting the smallest budget within the Department of Defense. This aspect of Marine culture is glamorized in the lyrics of the Marines Hymn which includes phrases such as “We have fought in every clime and place...”and “In the snows of far off northern lands, and in sunny tropic scenes…” Historical evidence bears truth to this austerity. Look at the photos from Operation Iraqi Freedom I – many Marines went to fight in the desert wearing green. Although with such a strong sense of superiority, who needs to blend in?

Marine Corps history is full of legendary, colorful characters. Chesty Puller is revered by all. Bumper stickers abound with phrases such as, “Goodnight Chesty, wherever you are.” The Marines’ mascot is an English bulldog named Chesty. Every time a dog “retires” the next one is also named Chesty with the surname of the appropriate Roman numeral. Chesty Puller is attributed with many famous quotes that have shaped Marine culture.

Some are probably true (like, “They’re on our left, on our right, they’re in front of us and behind us…they can’t get away this time.”). Some most likely are not true (such as, “You’re not a real Marine until you’ve been NJPed.”). A living legend is General Mattis. Quotes attributed to him exceed the number of “Chuck Norris-isms” in circulation. You will find t-shirts advertising “Mattis for President” and gold-emblazoned pictures of “Saint Mattis, Patron Saint of Chaos.” These are just two examples from a long list, but you will not find a Marine living or dead or that has been recorded uttering a disparaging remark about these two warriors. Civilians who dared speak ill of them mysteriously disappeared.

If you are into people watching, find a bench in close proximity to a group of U.S. Marines and observe. Marines get a haircut every week. EVERY WEEK. It must be a fresh haircut on Monday morning. The result is a significant amount of your two-day weekend spent waiting for the long row of barbers to yell, “Next!”

When a Marine exits a vehicle the first thing they do is bend over and adjust the boot bands and cuff of their trouser leg. Marines wait six long months each year for “sleeves up” to be declared. A tight, smooth, circulation-restricting sleeve roll is the hallmark of a “motivator.” Marines have the strictest height/weight regulations of any of the armed services. What would appear as a normal, healthy adult to most people is invariably referred to as a “fat-body” from the perspective of a U.S. Marine. Marines ALWAYS shave, even the 18-year-old Private First Class who has yet to experience stubble. He scrapes his face until he draws blood, stings it with a splash of Aqua Velva, and is affirmed by his Platoon Sergeant who says “Looking sharp Devil!”

8. Capitalizing the “M” in Marine

Many people don’t realize this, but it is a great offense to spell the word “Marine” without capitalizing the “M.” The author is careful to explain this taboo without committing the violation out of fear for his own safety. “Marine” is a title. The recruiting slogan proclaims it is, “Earned, Never given.” Movies often portray characters whose backstory includes service as a Marine. This makes them lethal, dangerous, feared and respected. A Marine veteran who commits a crime is considered much more dangerous, even if they were kicked out of boot camp on training day three. A few ignorant media outlets will use the term “Ex-Marine”, but the cult is quick to descend and correct the abomination. It’s Marine!

Back in 1775, my Marine Corps came alive! November 10th to be exact. Every United States Marine on the planet can tell you the Marine Corps Birthday. This is no exaggeration. On this day every year Marines literally tell each other “Happy Birthday Marine!” with great gusto. They genuinely mean it, and it doesn’t come off as cheesy.

When not forward deployed to austere locations they hold birthday balls replete with dress uniform, ceremony, speeches and yes, generous amounts of liquid refreshment. There is a reading of General John A. Lejeune’s Birthday Message from 1921 and a cake cutting ceremony. A piece of cake is presented to the Guest of Honor. Another piece of cake is presented to the oldest Marine present who takes a bite then passes it to the youngest Marine present. The exhibition is not theatrical but rather quite sentimental. Marines may question why they stayed in the Corps when they are at the turn-around point on the 3-mile PFT run, but while standing at attention for the Marines Hymn at the Birthday Ball, they know why!

There’s no doubt that Marines love their Corps. They joined wanting to challenge themselves and to earn the title. They wanted the best uniform, and they each have an EGA decal on their car. They own several t-shirts with phrases like “Uncle Sam’s Misguided Children”, and “If everybody could get it, it wouldn’t be the Marines,” and “Pain is weakness leaving the body.” However, something mysterious happens. It generally occurs between the two and four-year mark of the first enlistment. They decide it’s not cool to be “motivated.” They complain endlessly, they grow their hair long (by Marine standards), and they wouldn’t be caught dead wearing a Marines t-shirt. They still have the decal on their car though. This serves as evidence they are a closet motivator (i.e. they are proud of being a Marine, but don’t want the mockery of their peers).

A few break through the angst, admit their devotion, and reenlist. The others leave active duty and commence terminal leave with a bad attitude…then it hits them! They return to Hometown, USA with the zeal of the most ardent motivator. If they don’t replace the old USMC t-shirts, they will definitely be wearing attire from Grunt Style, 7.62 Design, or 5.11. They probably grow a “bro-vet” beard but they have a regulation haircut. In every conversation they will let you know they are a Marine and make extra effort to use acronyms, naval terminology and other slang associated with Devil Dogs. Stories about Recruit Training which would have brought mockery from fellow Lance Corporals and shouts of “Boot!” now draw a cluster of listeners on campus or the worksite.

There are many more indicators that the Marine Corps is a cult, but this is a start. After reviewing this commentary many Marines will reflect and begin to see the cult in Marine culture. At any rate, should you find yourself in harm’s way there is no one better to have in your corner than a U.S. Marine. Give them a rifle, a dip of Copenhagen, and a few crayons to snack on, and they will win the day. Semper Fidelis Marines!