Everything to know about Marine uniforms - We Are The Mighty

Everything to know about Marine uniforms 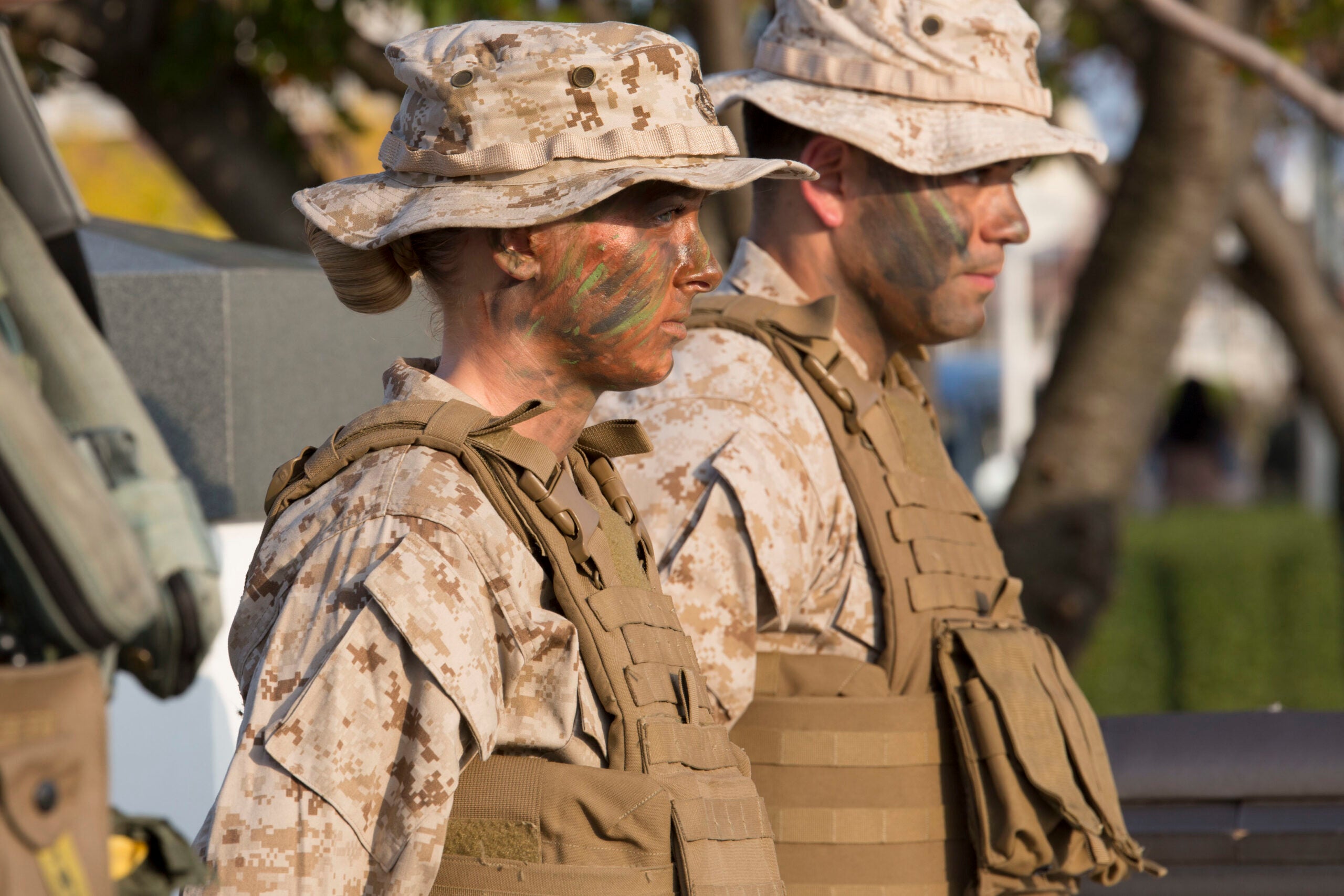 The Marines are many things, so it’s no surprise they’re really particular about their uniforms. Of course, we all know they’re entirely reverent about their traditions and heritage. But it turns out that the uniforms they wear are actually rich with history! Ask any Marine and they’ll tell you that every stitch on every uniform symbolizes something. So let’s break down what kinds of uniforms Marines wear and their symbols. Just like every other DoD branch, the Marine Corps has several uniforms. Each is worn during specific occasions.

The rest of the military calls this a “daily uniform,” but the Marines like to have their own words for things. The Combat Utility Uniform is what a Marine wears during training, while deployed, and while in garrison. The print Marines rock these days is called “Woodlands.” That changes to “Desert” when they’re in desert surroundings. In cold weather, they wear a white and gray pattern design. Each of these uses the Marine Pattern (MARPAT) design – that’s a small rectangular pixel pattern that helps them blend in better in natural settings.

Speaking of cammies, ever wonder why you always see Marines with their sleeves rolled up? That’s because a 2014 decision by the Marine Corps Commandant brought the rolled sleeves back in style. In 2011, the Corps returned to a sleeves-down policy to help promote uniformity and to help Marines train as they fight. The 2014 sleeves-up decision reflects one of the oldest Marine Corps traditions.

A Marine officer candidate has you covered if you’re still learning the best way to roll your sleeves.

The dress blue uniform is the only DoD-designated uniform that includes red, white, and blue – the colors of the American flag. The uniform is blue, and Marines wear white ceremonial gloves. So where’s the red come in? When a Lance Corporal promotes to a Corporal, not only is it is bump in rank and more responsibility, but it means the newly designated Corporal can add the legendary “Blood Stripe” to their Dress Blue uniforms. This scarlet red stripe commemorates the courage and tenacious fighting of the Marines who fought in the Battle of Chapultepec in 1847. Today, the Blood Stripe symbolizes honor and America’s eternal gratitude for fallen Marines. Traditionally, Officers, Staff Noncommissioned Officers, and Noncommissioned Officers of the Marine Corps all wear the Blood Stripe.

Early in their careers, Marines learn that this uniform represents the values by which they live. In fact, the Dress Blues have origins dating back to the American Revolution. Dress blues are worn at formal events, during ceremonies, and at social functions attended in an official capacity.

The prevailing symbol most widely associated with the United States Marine Corps is the Eagle, Globe, and Anchor. In fact, it’s the title every single Marine has earned since 1868. You’ll find the eagle, globe, and anchor on ceremonial Marine uniforms. The eagle represents the country Marines defend. The globe reflects the USMC’s worldwide presence and impact, not to mention their reputation for being badass. Finally, the anchor reminds all Marines of their naval heritage and the branch’s ability to access any battleground across all coasts worldwide.

No Marine uniform is complete without a kickass sword. During ceremonial duty, Officers carry the Mameluke Sword. This is the oldest type of weapon still in service today. The sword represents the USMC’s rich fighting heritage. It serves as a reminder of the Marines who have carried the sword before them. The first Mameluke Sword was given to Lt. Presley O’Bannon in 1805 by a Mameluke Chieftain in North Africa. Armed with his weapon, Lt. O’Bannon and his Marines marched 600 miles to rid Tripoli’s shores of pirates and rescue the USS Philadelphia’s kidnapped crew. Spoiler alert – the Marines won. Within a few years, all Officers carried the sword to recognize the first battle American Marines fought on foreign soil.

Officers aren’t the only ones to wear a sword on their Marine uniform. In fact, a few years after the Mameluke Sword debuted, the NCO Sword was added as a part of the official NCO ceremonial uniform. The M1859 NCO Sword was bestowed to NCOs and SNCOs by the 6th Commandant, Colonel John Harris, in recognition of their leadership in combat.

Did you know that the humble necktie has military origins?

Looking for more resources about our military? Check out these posts!

Here’s an overview of the Army’s battle dress over the years and here are the guidelines to uniforms in the military.