The complete guide to Merchant Marines - We Are The Mighty

The complete guide to Merchant Marines 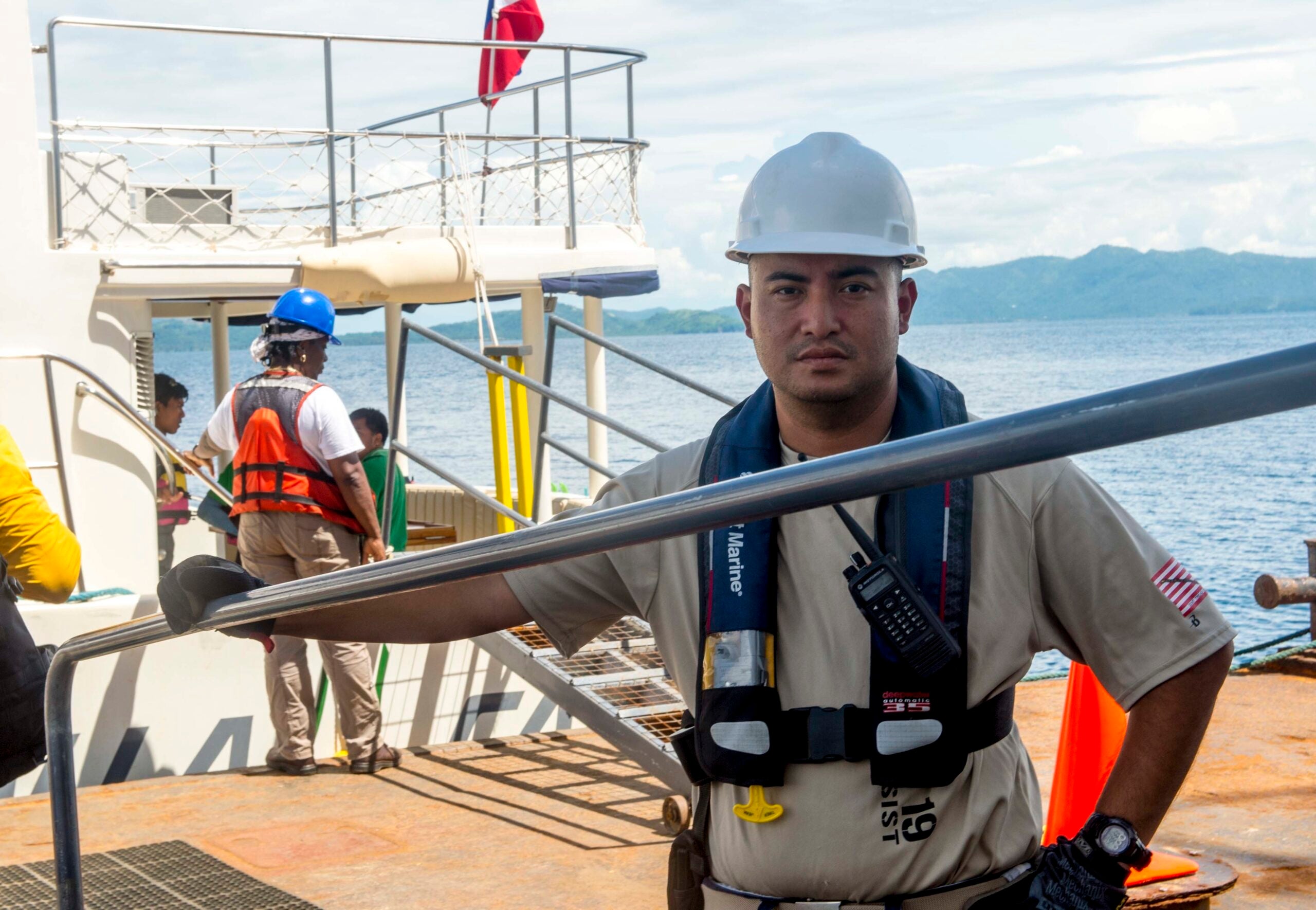 What is a Merchant Marine?

We might not think about them a lot, but the fact is that Merchant Marines do so much to keep America’s economy moving and to keep our country safe. Merchant Marines are civilian mariners who operate both civilian and federally-owned merchant vessels. Often they assist the Navy in refueling efforts and cargo deliveries. In peacetime, the mariners primarily transport domestic and international cargo and passengers. However, during active conflict, mariners act as the “fourth” arm of defense during war or national emergencies. Ships can be ordered to national service and help deliver military troops, supplies, and equipment overseas. Mariners can be seamen, mates, captains, or even pilots. They all play a role in ensuring commercial sea travel goes smoothly.

A History of the Merchant Marines

America’s Navy has helped play a significant role in shaping our country. So it’s no surprise that the Merchant Marines have a hand in that. During WWII, almost 250,000 civilian merchant mariners served our country. More Merchant Marines lost their lives at a greater rate than each branch of the military. However, Merchant Marines who served in the war were denied veteran status until 1987. Here’s a detailed explanation of the losses suffered during WWII.

How to Become a Merchant Marine

Becoming a Merchant Marine opens up the world. It helps develop and foster many of the skills service members learn during their service but without having to deploy. Of course, mariners stay on ships for long periods, so that’s sort of like a deployment minus the ordinances. In fact, it’s lot like becoming a member of the military. First, you decide where you want to work, and then you undergo several screenings to ensure you’re a good fit.

Of course, you’ have to be legally old enough to work full-time. Some jobs require a mariner to be at least 21 years old. There’s no upper age limit for those who want to join.

First, a mariner needs to get certified by the Coast Guard that you’re fit to work on the ship. After that, it’s decision time. There are three main Merchant Marine career paths. You can choose to work on the deck, in the steward department, or in the engineering department. The sooner you decide this, the more clarity you’ll have on your next steps. That’s because your intended career path determines your requirements for the Merchant Mariner Credential (MMC). You’ll assist with daily ship functions if you choose to work on deck. Engine department marines ensure the vessel machinery works correctly. Stewards provide food for the ship.

Once you’ve decided where you want to work, your next steps are really vital. You’ll need to apply for a Transportation Workers Identification Credential (TWIC). Think of a TWIC as a sort of TS screening. You’ll have to pass an FBI and Department of Homeland Security checks. Both include checking your immigration and terrorist watchlist status and checking to see if you have a criminal background.

Then, you’ll have a physical and a drug screening. Once everything is cleared, and you’re good to go, you’ll apply for your MMC.

MMOs have two routes that lead to commissioning. First, you can participate in an Apprenticeship Program (AP). APs give potential mariners real-life experience and the credentials you need to become an officer. The Maritime Apprenticeship Program (MAP) takes a little over two years, so it’s not for the faint of heart. You’ll be in the classroom for 26 weeks and at sea for 360 days. Completing the program means you earn the right to sit for mate-level exams. After you finish MAP, you’ll be well-qualified to seek employment as a Merchant Marine aboard several types of vessels. Find out more about the MAP here.

An alternative route is to attend the United States Merchant Marine Academy. The USMMA is a federal service academy that is known for its rigorous academic program. In fact, the academy requires more credit hours for a bachelor’s degree than any other service academy. USMMA students spend a year at sea to learn every aspect of life on a vessel. After graduation, midshipmen have a bachelor’s of science degree, a Coast Guard license, and an officer’s commission in the military. All graduates have a service obligation. Marinies either serve five years in the American maritime industry and eight years as an officer in any reserve unit of the military or five years of active duty in the military. Find out more about the USMMA here.

It’s hard work, but it pays well. The medium pay for a tugboat deck officer is around $400 a day. That’s pretty good if you consider it’s entry-level work. However, there aren’t any unions, so no one central organization sets a pay scale. You can expect to earn about $50,000 yearly, but salaries can range from as low as $27,000 to $120,000 based on experience.

Want to find out more? Here are the six most awesome things to know about the Merchant Marines.

What do Merchant Marines actually do?

These mariners ensure the safe transportation of commercial goods. They also assist the Navy with refueling efforts and other tasks as needed.

Are Merchant Marines in the military?

They aren’t part of the military but can be called to active duty if needed.

Being a Merchant Marine pays very well, especially for mariners with experience.

Of course! This helps the mariners understand one another’s rank and job function on the vessel.