The 10 weirdest military mysteries - We Are The Mighty 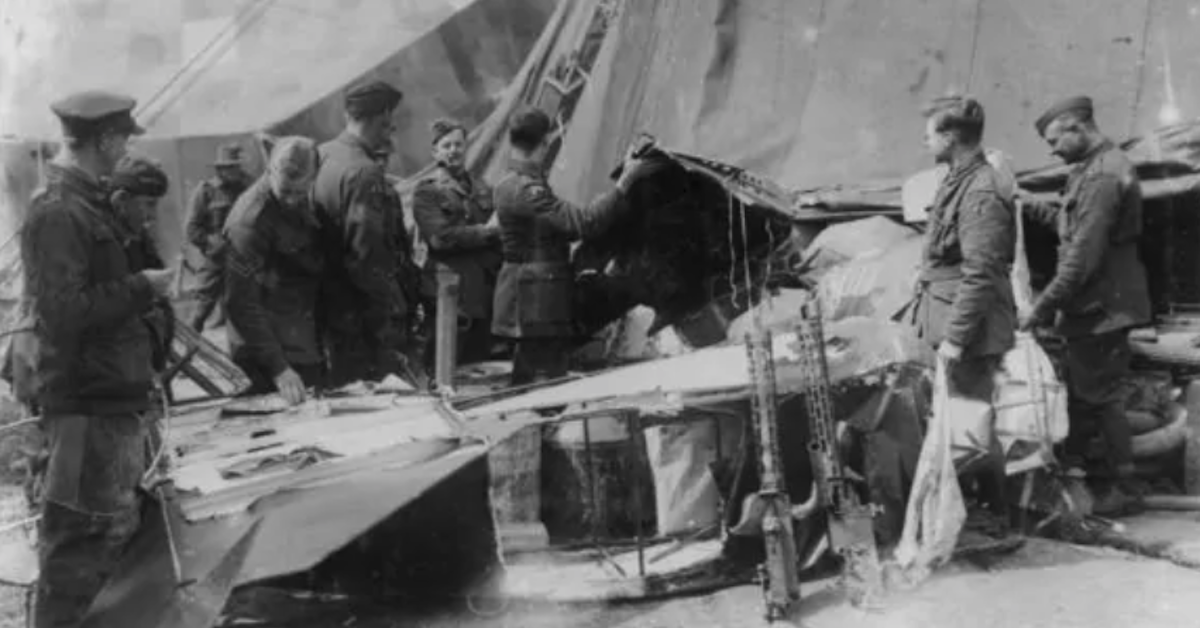 Copy print of a well-known photograph of airmen at Bertangles stripping the remains of Richthofen's wrecked Fokker Dr.1 Triplane and his two Spandau machine-guns, 22 April 1918. Salvaged by No. 3 Squadron, Australian Flying Corps. From the collection of the Air Force Museum of New Zealand.

The world is full of mysteries and the military world is no exception. Each war has been accompanied by strange stories, potential double agents, secret messages and unsolved disappearances. Scary? Intriguing? You tell me! Keep scrolling to learn about the top 10 military mysteries.

1. The foo fighters were more than a band name.

Almost everyone has heard of the Foo Fighters, but few realize the origins of the 90s rock band name. In WWII, the foo fighters were a genuine concern. At night, American and British aircraft pilots frequently spotted bright lights in the distance. At first, they assumed the lights were Russian or German flyers. Until they began to move, that is.

The lights would change direction and speed away faster than any aircraft possibly could. Hundreds of reports were recorded, with some pilots even reporting dogfights with them. Since no one was able to figure out what the crafts were or who piloted them, they were given the nickname “foo fighters.” To this day, it’s one of the biggest military mysteries of WWII.

The Red Baron, a German fighter pilot during WWI, was so famous that even Snoopy knew of his aerial prowess. He was one of the most lethal fighters in history, with over 80 confirmed kills. He was a serious threat to the Allied forces throughout the majority of WWI, until he was mysteriously shot down.

A Canadian pilot named Roy Brown claimed to have shot down his plane, but the details of his story didn’t quite make sense. No one knows for sure who killed him, but whoever it was would have had their name in the history books. The Red Baron was such an amazing pilot that the Allies helped to give him a decent burial in France in honor of his skill.

3. A Hungarian soldier turned out to be a serial killer…and he was never found.

During WWI, a man named Bela Kiss enlisted in the Hungarian army. He notified his landlord that he would be away for some time, and left for war. Some time later, the landlord heard that Kiss had died in combat, so he decided to rent the house to someone else. When he arrived to clean it out, however, he walked into a house of horrors. Several bodies were inside preserved in alcohol, all belonging to women who had disappeared.

It turns out, Kiss had been tricking women into marriage before killing them and taking control of their finances. Despite an extensive search, and a few reported sightings, he was never found.

4. A plane vanished out of thin air, starting the legend of the Bermuda Triangle.

It’s hard to imagine that six planes could straight up disappear, but that’s what happened. On December 5, 1945, five Grumman TBM Avenger torpedo bombers, collectively known as Flight 19, stopped responding to the control tower while on a training flight. A Mariner flying boat was deployed to search for the missing planes, but the Mariner soon vanished too. While no bodies or wreckage was ever found, 27 men and six aircrafts were never seen again.

While many rumors cropped up over the years, the disappearance probably has nothing to do with the supernatural. The most likely explanation is that Flight 19’s leader, Navy Lieutenant Charles Taylor, got so disoriented that he led the planes out to sea until they ran out of gas and crashed into the Atlantic. The rescue sea plane is likely to have exploded, as flying boats were prone to catching fire. Still, after all these years the resting place of the planes have never been found.

5. A strange ad was placed in the New Yorker magazine. But who published it?

Anyone can put an ad in the paper, but one published in the New Yorker was more than a little suspicious. The ad was for a real game called “Deadly Double,” but the copy gave a not-so-secret message: “We hope you’ll never have to spend a long winter’s night in an air-raid shelter, but we were just thinking … it’s only common sense to be prepared. If you’re not too busy between now and Christmas, why not sit down and plan a list of the things you’ll want to have on hand. … And though it’s no time, really, to be thinking of what’s fashionable, we bet that most of your friends will remember to include those intriguing dice and chips which make Chicago’s favorite game: THE DEADLY DOUBLE.”

A similar ad for the same product included the phrase, “Warning! Alerte! Achtung!” Okay, then. The dice shown in the ad’s images were even more strange. Instead of numbers 1-6, numbers like 7, 20 and 12, were shown. Some believe these bizarre ads were really a hint to American spies that an attack on Pearl Harbor was on the horizon. The creator’s widow has denied any suggestion that the game had any connection with spy activity, but it still seems a little fishy.

6. Lieutenant Colonel Pete Ellis predicted the bombing of Pearl Harbor over 20 years before it happened.

In 1920, Lieutenant Colonel Pete Ellis was a bit of an oddball in the Navy. He was known for being pretty solitary and working late into the night. When asked what he was doing in his office so late, he said he was working on “a special project.” A year later, he appeared to go mad. He gave a lengthy prediction of the future, including Japan’s attack on several islands on the Pacific, the targeting of Pearl Harbor, and the use of torpedo planes. Considering torpedo planes hadn’t been invented yet, he sounded crazy…except he was right.

All his predictions were dead on. After his prediction, he asked for a 90-day leave, which was personally approved by the Secretary of the Navy. He was given a sealed envelope and sent off to Europe, but he never arrived. He went to Japan instead, where he mysteriously died. A man who knew him travelled there to search for him…but he was found dead too! It’s a strange story with many loose ends, but it’s unlikely that we’ll ever know the details.

Ralph Sigler, an immigrant from Czechoslovakia, arrived in America when he was eight. He enlisted in the Army in 1947 and got married to a German woman shortly after while he was stationed abroad. When his tour was over, he brought her back to the states and the couple had a child. Over a decade later in 1966, FBI agents arrived at his doorstep to let him know he had been randomly selected to participate in counterespionage. The family’s ordinary life was turned upside down overnight.

In the following years, Sigler fed a great deal of false information to the SVR, Russia’s intelligence agency. When he met Russian officials in person, he quickly earned their trust. He identified 14 SVR agents and over time grew worried that the Russians were starting to suspect something. The FBI approached him by this time, but Sigler made plans to retire from the Army

His first contact with Russian officials came in 1968 in Zurich, and he soon earned their trust. Authorities have speculated that Sigler’s work led to the identification of 14 SVR agents. He was given an estimated 0,000 in compensation, every last penny of which he gave to the Army.In the mid-1970s, Sigler worried that he was “getting in too deep” and the Russians were becoming suspicious, which may have led him to offer extra information under pressure. By this time, the FBI had approached him.

The situation grew complicated, and some American intelligence officers were suspicious of his loyalties too. He was forced to take a polygraph test, which showed he was extremely on edge. Concerned, the Army arranged for Sigler to stay at a motel. Sadly, he never left. His body was found in the motel room after he had been electrocuted by two motel lamps. While the Army ruled his death a suicide, most believe he was killed and possibly tortured by Soviet agents. In his last call to his wife, he ominously told her, “I’m dying. I never lied.” He was later awarded the Legion of Merit cross for his sacrifices.

8. During the Vietnam War, troops on both sides claimed to be attacked by large, ape-like creatures. Vietnam doesn’t have apes.

The Vietnam war was chaotic to say the least, but there’s one mystery that has never been explained. Troops from both sides often reported exchanging blows with a group of human-like creatures who had reddish hair and ape-like features. Strangely, there isn’t a single known species of ape in Vietnam.

Other soldiers reported an enormous snake around 100 feet long with a massive, three-foot head. In Vietnamese folklore, such a creature was known as a “Bull Eater.” For comparison, the largest snake ever recorded is a reticulated python named Medusa, who’s 25’2″ long. Either that was a massive exaggeration or a tall tale…or a 100-foot mystery monster is lurking in the jungle.

9. A Revolutionary War hospital dealt with plenty of death, yet no one knows where the dead were laid to rest.

During the American Revolution, there were obviously a lot of injuries. To serve these wounded soldiers, a hospital was built in the new town of Easton, Pennsylvania. Needless to say, 18th-century medicine wasn’t the best. While medical records were poorly kept, it’s safe to say that hundreds or thousands died there. The strange part is that there’s no record at all of where they were buried. Since there was no formal grave yard nearby, the easiest assumption is that somewhere around Easton, there’s a mass grave from the Revolutionary War that has yet to be found. If I lived in Easton, I might move.

10. What happened to Paul Whipkey?

Fast forward a few years to the 50s. Lieutenant Paul Whipkey was working in the Air Force at Fort Ord, California. He was one of the first to witness an atomic bomb test, and he was doing pretty well. When 1957 arrived, however, things began to go awry. Whipkey stopped acting like himself, dropped weight, and appeared to be constantly ill. He developed black moles all across his body and lost all his teeth. While he was at work, two men in suits frequently arrived to speak with him, and colleagues reported that he always appeared tense when the men left. On July 10th, he left on a trip to Monterey, but he was never seen again.

The events following are shrouded in secrecy. The army cleaned out his apartment almost instantly, and he was classified as a deserter. The army seemed reluctant to search for Whipkey, and in 1977 they destroyed all files on him, yet his status was updated from “deserter” to “killed in action.” Some believe he died on a secret CIA mission, but most people believe he suffered from radiation poisoning due to the atomic bomb detonation he witnessed. I guess we’ll never know!