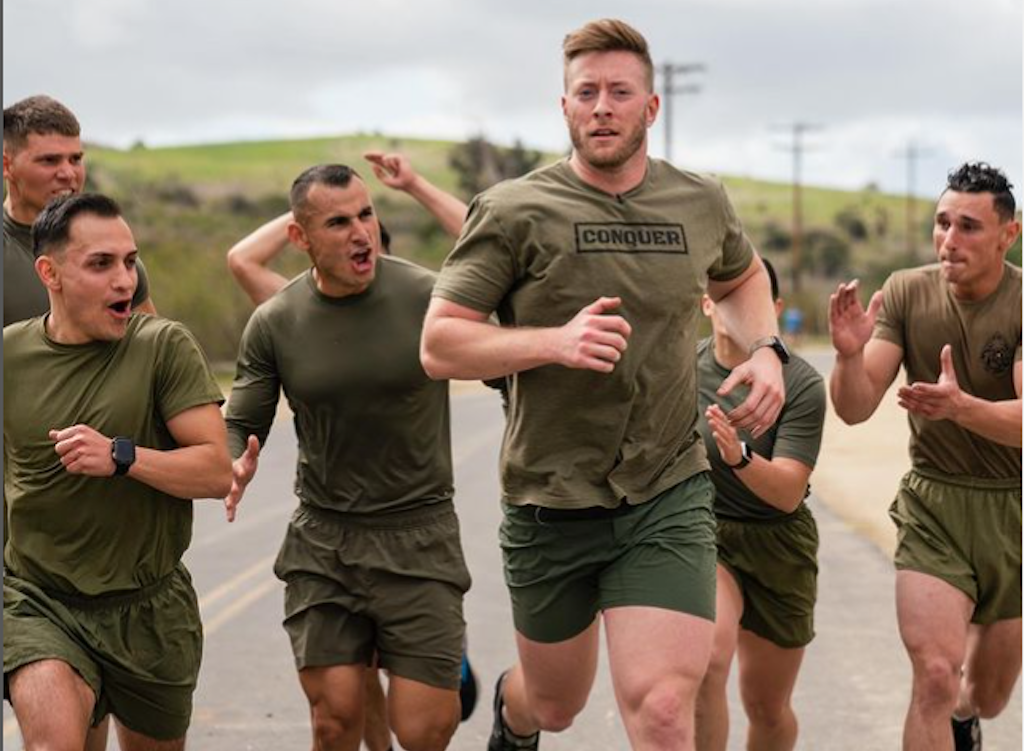 Austen Alexander on Camp Pendleton with the Marines. Photo courtesy of @austen_alex.

Austen Alexander was challenged by the Marines of the Entertainment Media Liaison Office to try out some Marine Corps physical training. Alexander signed up for trying his best at the Marine Corps Physical Fitness Test, aka PFT, which measures cardiovascular fitness and is completed in the green-on-green PT uniform. The three portions of the PFT consist of a three-mile run, pull-ups or push-ups (although with push-ups you cannot get the full score for the event), and crunches, which are going to be planks here in the next iteration.

Perfect scores for pull-ups usually consist of a high number of dead hang pull-ups in the 20+ range. The perfect run time score is in 18 minutes, which is really moving and can only be done by a small percentage of Marines. If you want to do that well on the run you may want to start marathon training to build up your cardiovascular endurance. The test is not for the faint of heart, especially if conducted in a hilly area and/or during the sweltering heat of Southern California in the middle of spring on a lead-up to summer

The Marines do their best and are professional with Alexander, even if he is a Squid! Alexander served in the Navy for seven years in Naval Security as a part of the harbor patrol. He combined his passion for fitness and video with his founding of AMA Marketing while he was still in service. Since he left active duty he has been a full-time producer of his social media videos, commercials and fitness videos for a number of different social media platforms including YouTube, Snapchat, Facebook and many more. His work has appeared in many magazines including Men’s Health. He has been a social media presence, especially with him attempting physical fitness tests for other branches such as the Air Force. His YouTube channel is highly recognized for the opportunity given to influencers and celebrities a chance at some high-level military training, which provides for a fun challenge to witness.

Pushing people out of their comfort zone is signature and forte, which is interesting to watch and maybe even try yourself. Alexander brings a healthy dose of self-deprecating humor to his videos, which makes him highly likable and fun to watch.

He has over 1M followers on YouTube and 118k on Instagram as well. Alexander has been making social media videos for over five years with an increasing track record of success. Take a watch and see how well he does against the Marines in their PFT as it might surprise you. He is a tall bloke at 6’3″ and over 200 pounds, so, he has a lot to carry.