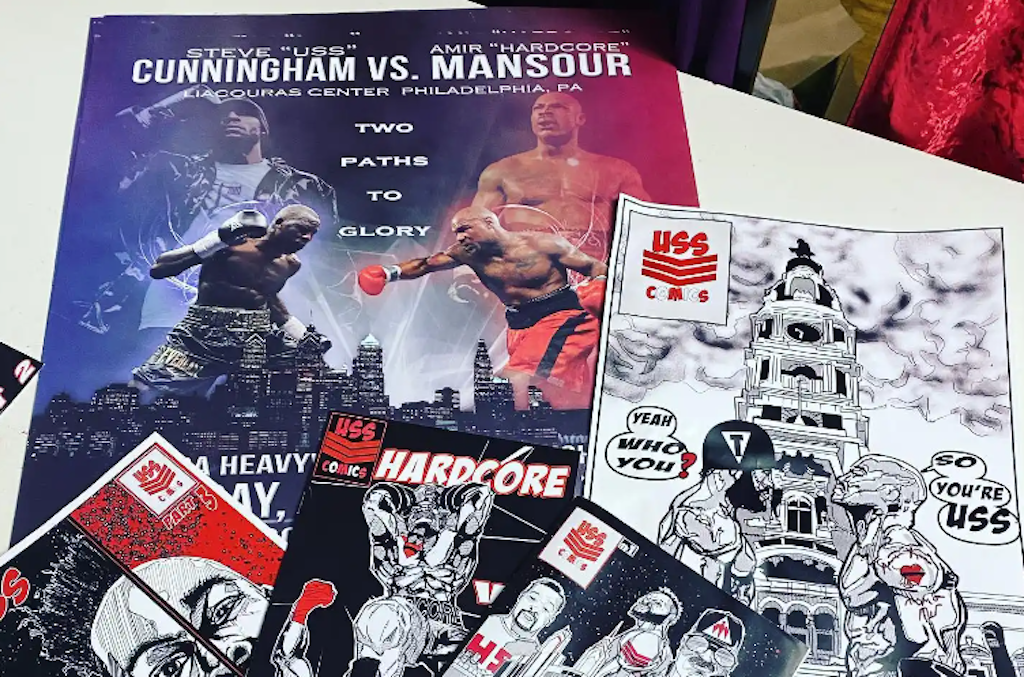 On October 22, 2022, a 19-year-old super welterweight boxer from Pittsburgh made his anticipated professional debut in front of a Kansas City, Kansas crowd. The young fighter’s professional debut was much anticipated in large part due to the former two-time world champion, who also happens to be his father, working his corner. Steve Cunningham Jr. made quick work of his opponent, knocking him out 16 seconds into the boxing match that was scheduled for four rounds.

Boxing trainer for his children and owner of the USS Fight Academy gym (North Versailles, PA), are just two of the many hats that USS Steve Cunningham has worn throughout his life. The 46-year-old Cunningham came of age as a sailor in the United States Navy. Having served from 1994 to 1998 as an Aviation Boatswain’s Mate-Fuel, Cunningham was a member of the crews of the aircraft carriers USS America and USS Enterprise. Cunningham’s talent in the boxing ring did not go unnoticed in the Navy. He kicked off his amateur career while assigned to Norfolk Naval Station in Virginia at the age of 19. In 1998, Cunningham joined the All-Navy Boxing Team, capturing a silver medal at the Armed Forces Boxing Tournament. That same year, Cunningham won the National Golden Gloves in the 178 pounds division.

Following his honorable discharge from the Navy, the Philadelphia native turned professional as a boxer in 2000. A tribute to his military service on warships, Cunningham adopted the moniker of “USS.” Cunningham went on to make hordes of sailors proud, holding the International Boxing Federation (IBF) cruiserweight title between 2007 and 2008, and again between 2010 and 2011. Cunningham is best known for his numerous matches in the cruiserweight and heavyweight divisions of boxing against notable fighters including Krzysztof Włodarczyk, Marco Huck, Tomasz Adamek, Yoan Pablo Hernández, Tyson Fury, Antonio Tarver and Krzysztof Głowacki. He retired from the sport in 2017, returning to the ring one more time in 2021 to defeat mixed martial arts legend Frank Mir on the undercard of the Jake Paul vs. Ben Askren boxing match.

John DiSanto, editor-in-chief of www.PhillyBoxingHistory.com and Chairman of the Pennsylvania Boxing Hall of Fame, covered all of Cunningham’s fights over the years. DiSanto described Cunningham as a “brave fighter.” He went on to say, “Cunningham had all the tools, and was also a warrior with an appetite for battle. So many of his fights were slugfests. He has always been underrated, but I think we’ll look back at Cunningham as one of Philly’s best fighters. I feel lucky to have had the chance to cover his career.”

When asked to describe “USS Cunningham,” Steve said, “The character is based off me, and has my personality. When he is good, he is good. When he is bad, he is ready to go to war. Just like me in the boxing ring, ‘USS Cunningham’ does what it takes to win.”

Cunningham explained that Amir Mansour was the obvious choice for his opponent in USS vs Hardcore, because the two men “fought an epic war in the ring,” and are still close friends. “I called Amir and told him I’m going to turn you into a superhero for my comic books. I then asked him what he wanted his superpowers to be. He was excited about it, and now loves the comic books.”

The characters that fill the pages of Cunningham’s boxing inspired comics can be described as a “who’s who” list of boxers and boxing insiders. Boxing writer and historian John DiSanto even found himself drawn into the second issue of USS vs Hardcore. In this issue, DiSanto is portrayed as a news obsessed media mogul who, to the dismay of his wife, spends a considerable amount of time in the restroom. In regards to his comic book debut, DiSanto said, “I was flattered when I heard Steve made me a character in his comic book. But when I saw that my character was introduced sitting on the toilet it was a shock! It was funny and felt like I was being roasted by a friend. Maybe I’ll be a superhero in the next one.”

Cunningham’s work is in large part inspired by legendary comic book artist, writer and Spawn series creator, Todd McFarlane. In addition to Spawn, he lists Spider-Man, Wolverine, Batman, Superman and Magneto as his favorite comic book characters. “An artist drew a comic of Wolverine and Spider-Man fighting in a cemetery. That was one of my most treasured comics growing up,” Cunningham said.

During the October 8, 2022, Atlantic City (New Jersey) Boxing Hall of Fame Fight Fan Experience, throngs of excited boxing fans approached Cunningham’s table where he sold comics and poster size prints of his artwork. Ray McCline, President and Founder of the Atlantic City Boxing Hall of Fame, said Cunningham’s success in professional boxing and the creation of comic books, “speaks volumes about his creative mind and the type of great champion he is, not only in the boxing ring, but in the world of comic books.” He added, “At times, fans see fighters as one-dimensional warriors. They don’t always realize that many boxers, such as Steve, also have a creative side that they express through a variety of outlets including music, art, writing and cooking.”

Boxing and comic book enthusiast John Martin, Fan Event & Memorabilia Coordinator with the Atlantic City Boxing Hall of Fame, was also on-hand October 8th to witness Cunningham interact with fight fans. Of this experience, Martin said, “You wouldn’t think comics and boxing make for a great mix. But Steve Cunningham pulls it off. As a fan of both ‘The Sweet Science’ (boxing) and superheroes, it was great seeing so many people purchase Steve’s comic books and art prints.”

Cunningham’s next project is a series inspired by horror anthology comics and television shows such as Tales from the Crypt. His first horror comic, entitled Lipps, will tell the story of a man who is tormented by those around him for his abnormal physical appearance and intellectual disability. The main character, who suffers an untimely demise, returns from the grave to take revenge on those who wronged him in life. Cunningham also plans to release three more horror stories after Lipps, one of which is entitled Hip Hop Horror Story. A preview of Lipps is now available on the USS Comics’ Instagram.

When asked about the challenges associated with changing comic book genres, Cunningham said, “Drawing superheroes shooting powers from their hands and flying is entirely different from telling a horror story in comic book form. It takes more time to create because I really must think about how I visualize things and what will be scary to the reader. That’s challenging, but very cool. No doubt about it, I’m always up for a challenge!”

A fitting response from an accomplished man who continues to meet every challenge in life head-on.