History of the Battle of the Bulge - We Are The Mighty

A detailed guide to the Battle of the Bulge 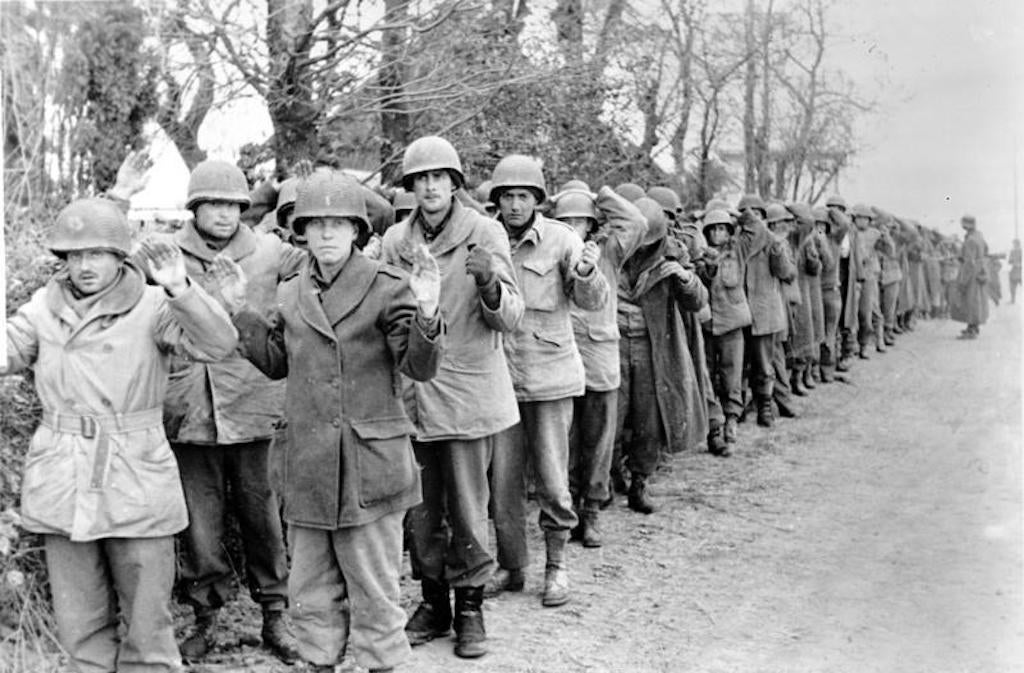 Many people have heard of the Battle of the Bulge, but few know what actually happened there. The Battle of the Bulge took place from December 16, 1944, to January 16, 1945. Many consider it Germany’s last-ditch effort to turn the tide of World War II in their favor. It’s also considered the last major German offensive of the war.

Here’s a brief overview of what happened during the Battle of the Bulge.

The Battle of the Bulge began on December 16th, 1944. That’s when German forces launched a surprise offensive against Allied forces in Belgium. German forces had been amassing all summer after the landing at Normandy via the Volksstrum. The “home guard” was also made more effective by German troops who’d managed to leave France unscathed.

The German goal was to capture the port city of Antwerp before the Allies could bring in reinforcements from the east. For the next few weeks, Allied and German forces fought fiercely. Historians suggest this was some of the heaviest combat of the entire war. Ultimately, however, the better-equipped and -trained Allied forces were able to push back the Germans and reclaimed control of Belgium.

Dwight D. Eisenhower distributed 48 divisions along a 600-mile front between the North Sea and Switzerland. Meanwhile, the Germans selected a hilly a woody areas called the Ardennes. They banked on the fact that the thick woods would provide plenty of concealment from the Allies. However, one thing the Germans didn’t count on was that the high ground also intersected with deep valleys. That meant that the through roads became bottlenecks.

While the Battle of the Bulge was a decisive victory for the Allies, it came at a heavy price. More than 19,000 American soldiers were killed in action. Another 23,000 were wounded and nearly 8,000 were captured or listed as missing in action.

The Battle of the Bulge was one of the turning points of World War II. It was also one of the bloodiest battles of the war. While the cost was high, this decisive victory helped ensure that Allied forces would ultimately prevail in Europe.

How the Battle of the Bulge is Observed Today

Museum exhibits help preserve accounts of the battle. The National WWII Museum in New York City features artifacts from the battle. You can also explore first-person accounts from veterans who fought in it. Here are 18 photos that show the bravery of the U.S. service members during the Battle of the Bulge.

Ceremonies and memorials take place each year on December 16. Collectively, these commemorate the battle and honor those who fought and died in it. One of the largest is held at La Roche-en-Ardenne in Belgium. This observance features a parade, wreath-laying ceremony, and veterans giving talks to school children about their experiences.

Battle of the Bulge Memorials

The Mardasson Memorial is located just outside of Bastogne, Belgium—one of the key battlegrounds of the Battle of the Bulge. The memorial is in the shape of a five-pointed star with a wall around its perimeter. The wall has 50 panels, each engraved with the name of an American state or territory. Inside the star are three granite pillars that represent the three main Allied countries—the United States, Great Britain, and France.

The Mardasson Memorial is dedicated to all American soldiers who fought in World War II. However, it has a special significance for those who fought in the Battle of the Bulge. As you walk around the monument, you can’t help but be moved by its simple yet powerful message: “Freedom Lives.”

One of fiercest battles during the Battle of Bulge took place in Bois Jacques Woods—a small stretch of forest located just outside of Houffalize, Belgium. Today, there is a small memorial dedicated to this battle located at the edge of the woods. It consists of a plaque mounted on a large boulder with a description of what happened there.

If you’re looking for something more substantial, you can visit nearby Bastogne War Museum which has an entire section devoted to Bois Jacques Woods. This part of the museum features artifacts from the battle as well as eyewitness accounts from both American and German soldiers who were there.

The Luxembourg American Cemetery is located just outside Luxembourg City. It is one of nine World War II cemeteries owned and operated by the American Battle Monuments Commission—an agency within the Department of Defense that oversees military cemeteries and monuments around the world.

This particular cemetery is notable for two reasons: first, because it’s one of only three WWII cemeteries managed by the ABMC that actually exists within the country where the battles took place; and second, because it’s the final resting place for more than 5 ,000 Americans who died fighting in Europe during WWII—including almost 500 who lost their lives during the Battle of the Bulge.

A visit to the Luxembourg American Cemetery is always somber, but it’s also incredibly moving. Walking among the rows upon rows of flag-draped tombstones, you can’t help but be awestruck by the sacrifice these men and women made for our country. And as you stand there looking out at all those white crosses stretching off into the distance, you can’t help but feel proud to be an American.

Where is the American memorial for WWII?

The World War II memorial is located at the National Mall in Washington, D.C.

When did WWII end?

There are three official end dates because of three different signing ceremonies on May 8, May 9, and September 2, 1945.

How did WWII end?

Did WWII use a draft?

Yes, there was a draft during WWII.