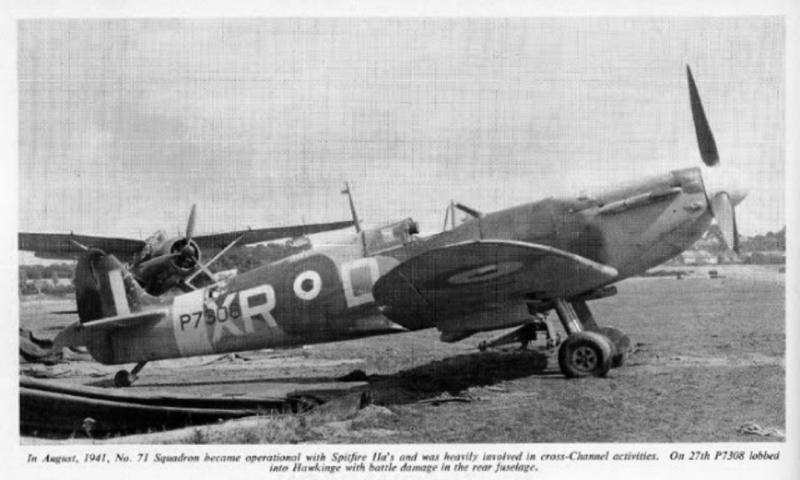 Before the tragic events of December 7, 1941, much of the American population preferred to stay out of the conflicts in Europe and Asia. However, some Americans saw the threat of Axis powers and were eager to get into the fight. Although America remained neutral before Pearl Harbor, this didn’t stop young men from crossing the border into Canada with the intent of joining the military. One of these young men was William Dunn who would become the first American ace of WWII.

Dunn originally enlisted in the U.S. Army as an infantryman in 1934. He received an honorable discharge the next year. As the war in Europe heated up, Dunn made the journey to Canada where he joined the Canadian Army on September 7, 1939. He rose through the ranks quickly and was a Sgt. Maj. by the time he joined the RAF’s No. 71 Eagle Squadron on December 13, 1940.

The Eagle Squadrons were three RAF fighter squadrons made up of volunteer pilots from the United States. Desperate to hold the Nazis back across the English Channel, the RAF had lower vision, age, and education requirements than the U.S. Army Air Corps. This attracted many Americans to cross the pond and join the RAF.

By August 1941, Dunn had racked up four kills in his Hawker Hurricane and Supermarine Spitfire Mark II, just one shy of becoming an ace. On August 27, No. 71 Squadron was escorting a flight of British Blenheim bombers over the channel to occupied France when they were jumped by German Messerschmitt Bf 109s. During the ensuing dogfight, Dunn’s skull was grazed by an enemy bullet. He was also shot in his right calf and foot, part of which was severed. Despite the grievous wounds, Dunn remained in the fight and managed to shoot down an enemy aircraft and become an ace.

After scoring his fifth kill, Dunn was attacked by another four Bf 109s and barely escaped back to England. He was able to land at an airfield in Hawkinge where he was taken to the hospital. There, Dunn learned that one of his rivals within the squadron, another American named Gregory Daymond, was given credit as the first American ace after the mission. Daymond would retain the title for many years before it was corrected.

After his hospitalization, Dunn became an instructor pilot for the Royal Canadian Air Force before transferring to the U.S. Army Air Force on June 15, 1943. No. 71 Squadron was similarly transferred to the AAF the year where it became the 334th Fighter Squadron. This legacy would be key to righting the claim of the first American ace of WWII.

In 1965, when the National Museum of the United States Air Force put out a request for historical artifacts and memorabilia, Dunn submitted his RAF uniforms, photos, and crucially, his logbook. “Dunn was very organized,” said Capt. Timothy Anderson, 334th FS director of staff, in an Air Force release. “He kept a detailed record of all his [flights] in his logbook, and that’s what really helped him get recognized as the true first American ace of World War II.”

On March 19, 1968, the record was set straight. The American Fighter Aces Association reviewed Dunn’s claims with the RAF and the 334th FS along with records, including logbooks, and confirmed that Dunn was indeed the first American ace of the war. The records were corrected and Dunn was vindicated. After the war, Dunn remained in the AAF and was part of its transformation to the U.S. Air Force. He served in Korea and Vietnam and accumulated 38 years of service and 378 combat missions before retiring as a Lt. Col.

Dunn passed away in Colorado Springs, Colorado on February 14, 1995. In 2016, the 334th FS dedicated a memorial to Dunn and the other members of No. 71 Squadron. Members of Dunn’s family attended the ceremony and donated one of his RAF uniforms to the squadron. With the record set straight, Dunn’s legacy of service and dedication stands steadfast.