This wooden jet fighter showed just how desperate Germany was 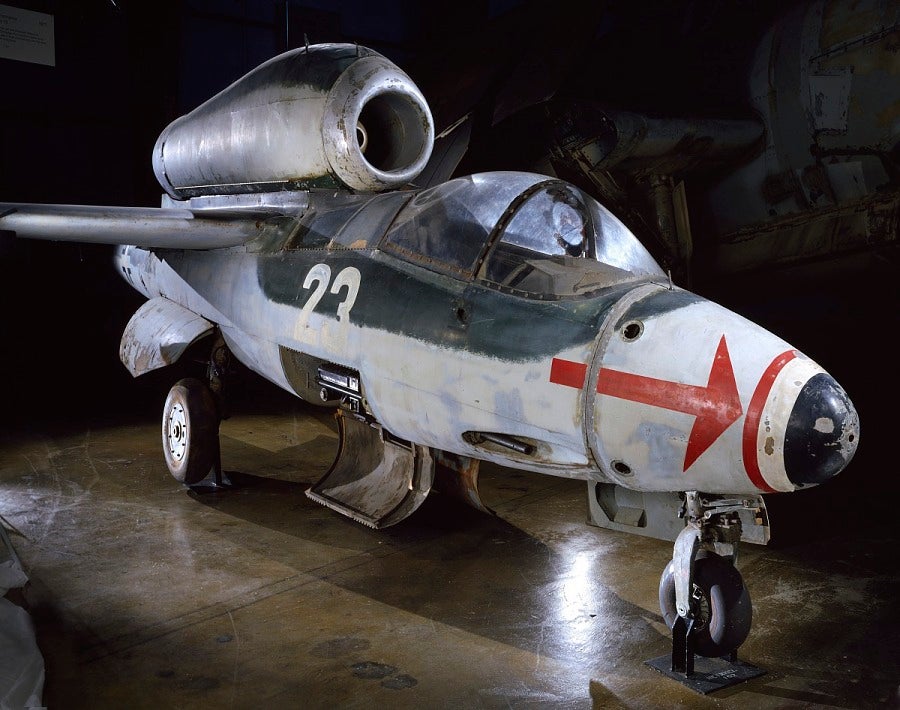 By early 1944, the Germany and the Luftwaffe were in a bad state. Allied bombing had a devastating effect on oil supplies and the new P-51 Mustang was killing German pilots faster than they could be trained. Though Germany was developing the twin-engined Me 262 jet fighter to combat the allied bombers, Hitler’s constant interference and the strain on resources delayed the program. Luftwaffe Supreme Commander Reichmarschall Hermann Göring and Armaments Minister Albert Speer proposed the alternative solution of a single-engined jet fighter that was cheap and easy to produce and could be flown with very little training. Their idea was approved and a contract was issued for the Volksjäger, or “People’s Fighter”.

The Volksjäger requirements called for a single engine to reduce cost and construction complexity. Its airframe would be made primarily of wood and non-strategic metals since Germany’s reserve of war materials was dwindling. Moreover, the design had to be simple and able to be constructed by semi and non-skilled labor, including slave labor. The contract also required that the plane be easy to fly with very little experience, though this was more a sign of Germany’s desperation. “[The] unrealistic notion that this plane should be a ‘people’s fighter,’ in which the Hitler Youth, after a short training regimen with clipped-wing two-seater gliders like the DFS Stummel-Habicht, could fly for the defense of Germany, displayed the unbalanced fanaticism of those days,” recalled the plane’s designer, Dr. Ernst Heinkel, after the war.

Heinkel’s design, the He 162 Spatz (Sparrow), was selected on September 25, 1944. Incredibly, the first prototype flew less than 90 days later on December 6. Though the first flight was successful, it was noted that some of the glue holding the wooden frame together started to fail. The second test flight on December 10 saw a similar glue failure that caused the aileron to separate from the wing and resulted in a crash that killed the pilot. Still, Germany was desperate and testing pressed on without addressing the glue issue.

Though the He 162 was supposed to be flown by Hitler Youth, the aircraft turned out to be too complex and required a more experienced pilot at the controls. A small number of training gliders were built and delivered to a Hitler Youth squadron at Sagan. However, the unit was in the process of forming when the war ended and did not undergo any training.

Despite the need for trained pilots, production of the He 162 began at Salzburg and the underground facilities at Hinterbrühl and Mittelwerk. The first operational unit received the He 162 in February 1945. Despite heavy allied bombing of German industry and air bases, I./JG 1 (First Fighter Wing) began training on the new jet in March and saw their first action with it the next month.

On April 19, the He 162 scored its first kill when Feldwebel Günther Kirchner shot down an RAF fighter. While on approach to land, the vulnerable jet fighter was shot down by another RAF fighter. Both the plane and pilot were lost. Though more victories were scored in April, I./JG 1 lost 13 He 162s and 10 pilots. However, only two were actually shot down. The other planes were lost due to mechanical failure, structural failure, or running out of fuel.

On May 5, the squadron was grounded following the surrender of German forces in the Netherlands, Northwest Germany, and Denmark. Unlike other German squadrons with experimental aircraft, I./JG 1 did not destroy their planes. Rather, they turned them over to the British on May 6 who distributed them among the other allied nations for evaluation.

After the war, allied research found that the He 162 was actually a capable and well-designed fighter. Its inherent problems were the result of its rushed production. If the Germans had the time and resources for proper testing and evaluation, the plane could have been a serious threat to allied air superiority.

Today, many examples of the He 162 survive in museums including the RAF Museum in London and the Smithsonian Institute’s Air and Space Museum in Washington, D.C.