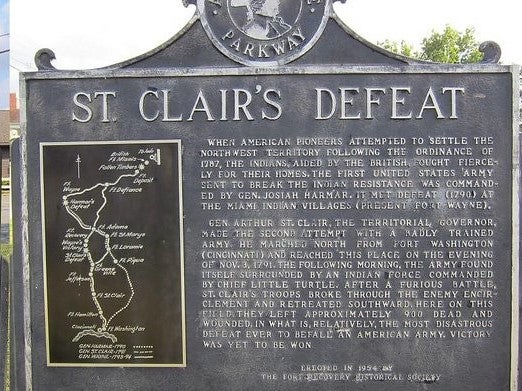 In the earliest days of the American republic, the United States military was as disorganized as the rest of the American government under the Articles of Confederation. When that document was replaced by the U.S. Constitution in 1789, the government became more organized but the military still needed some work.

The Treaty of Paris that ended the American Revolution awarded all lands east of the Mississippi River and south of the Great Lakes to the new American government, but the areas were still not as developed as the original 13 colonies. Still, Americans were determined to expand westward.

Though Britain ceded its claims to the land, no one consulted the countless native tribes that still lived in the area. Native leaders did not recognize American sovereignty over the region but the U.S. government needed to sell the land to pay its Revolutionary War debts – and settlers were willing to buy.

White settlers clashed with the natives in sporadic violence, forcing the U.S. government to step in, but the American Army was not the army that won the revolution. There were few professional soldiers available to fight the natives. When Gen. Joshua Harmar first moved on the natives in Ohio and Kentucky, where they were chewed up and spit out by the Miami and Shawnee tribes.

Harmar’s failure forced now-President George Washington to get more aggressive in the new territory. Washington dispatched Gen. Arthur St. Clair at the head of 2,000 men, some on six-month enlistments and some Kentucky militia to quell the native violence.

Aside from the lack of organization of both the Army and the U.S. government, St. Clair’s army had a lot going against it from the start. Being comprised of short-term enlistees and militiamen, they were poorly trained and poorly equipped. Supply issues cause a shortage of food and horses, and what the army did have was not the kind of quality it needed. St. Clair suffered from gout, and the army’s bad fortunes caused a series of desertions and delays.

But, as the saying goes, you go to war with the army you have, not the army you’d like to have.

Which, in this case, turned out to be a terrible mistake, maybe the army’s worst-ever mistake in its nearly 250-year history.

St. Clair’s objective was the Miami settlement of Kekionga, which served as a sort of capital for the tribe. He moved out in October of 1791 on his way Kekionga and the natives harassed his army the entire way. But they never really made it to attack the natives, the natives came to them.

By Nov. 3, 1791, the tribes in the area had amassed a force of more than 1,000 warriors and they attacked at the worst possible time for the Americans. They had just broken for an evening meal, and many were without weapons. Even so, the militiamen immediately fell apart and fled.

The regulars stayed, grabbed their weapons and formed battle lines, knowing their organization was all that could save them from certain death. As Miami leader Little Turtle began to focus on the U.S. regulars, the American artillery attempted to get into the fight. The artillery was quickly taken out by native snipers.

In a desperate attempt to win a last-second rout, some of the regular troops attempted a bayonet charge, only to be fooled into following the native warriors into the woods. Once in the woods, the soldiers were trapped and killed by the indians.

After two hours, it was all over. St. Clair ordered a retreat and one last bayonet charge was run. This time, the charging Americans never stopped, instead making a break for the nearest American fort. They were pursued for miles before the native tribesmen turned around and headed back for the camp.

The Americans suffered a staggering 97% casualty rate, a quarter of the entire U.S. Army was wiped out in one engagement. It was the worst military defeat the United States ever suffered.