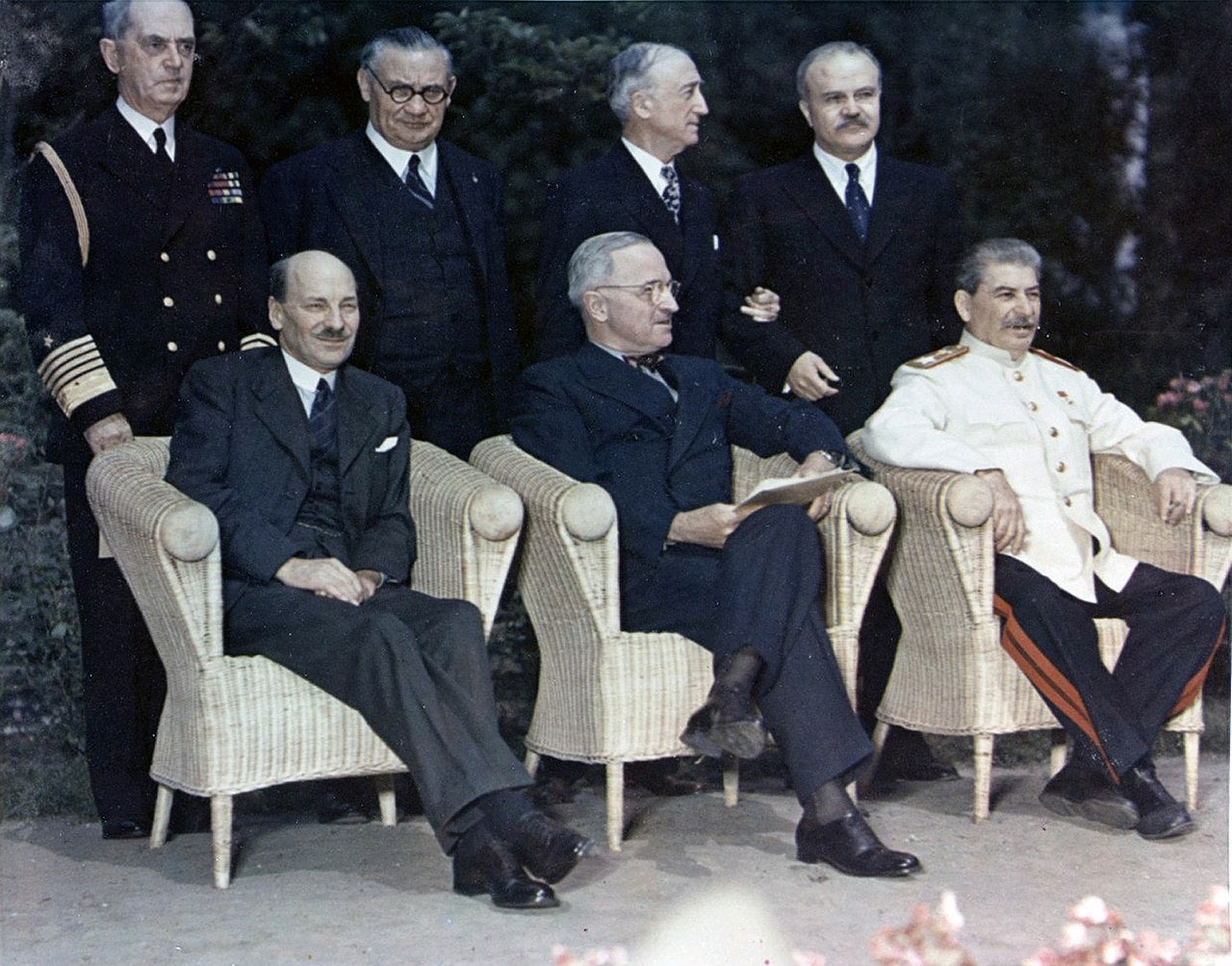 The Big Three pose with their principal advisors, at Potsdam, Germany, 1945. Photograph from the Army Signal Corps Collection in the U.S. National Archives.

On July 24, 1945, new President Harry S. Truman and Soviet Premier Josef Stalin entered a meeting, just the two of them, with shocking news to break to one another. Truman went first, only for Stalin to shrug. Then Stalin gave his potentially war changing news, which Truman basically waved away.

Turns out, they were both bad actors and their spy rings had already alerted both of them, leading to a meeting that could’ve been a comedy sketch.

US and USSR had a…troubled history

The stakes in 1945 were quite high. Germany had just exited the war, but Japan was preparing for a deadly defense of its home isles. American casualties in the Pacific steadily climbed from 1942 to 1945, and the battles for the home islands loomed as potentially the deadliest of the war. And nations were already preparing for peace…and for what would become the Cold War.

The Soviet Union had always been a problematic ally. Despite fighting border skirmishes with Japan in Asia in 1939, the Soviet Union was essentially an Axis power from 1939 to 1941. It entered a nonaggression pact with Nazi Germany and invaded Poland, knocking the second strongest allied military out of the war in 1939. It didn’t turn to the Allied cause until Germany invaded in 1941.

When it became an Ally and its forces reached Poland, it broke agreements to re-install the government-in-exile and set up a puppet government in the country, instead. President Franklin Roosevelt declared just a few weeks before his death in 1945 that, “We can’t do business with Stalin,” because he either lied or was no longer in control of the country.

The meeting of the very-well-informed minds

So, it’s no surprise that Stalin and Truman kept secrets from each other and diligently spied on one another. So they both entered the meeting with knowledge of the other’s secrets. Truman broke his news first: atomic bombs were no longer theoretical. America proved it. And it would soon have an arsenal.

Spare a thought for Truman. He planned on using his new atomic leverage to knock Stalin off-balance at the meeting, to take control of the negotiations and shape the post-war world. But Stalin basically went full Jeremy Clarkson and changed topics.

Then Stalin dropped his rhetorical A-Bomb. Japan had approached the Soviet Union for a separate peace. Soviet acceptance would break the Declaration by United Nations that formed the basis of Allied agreement. But, you know, it was the Soviet Union. Truman should have been shocked and worried that Stalin would change sides again, or at least sit the rest of the war out. But back to Clarkson:

Truman knew about the separate peace offer and knew that Stalin had no plans to take it. Stalin, like Truman, had planned to take control of negotiations by shaking his allied adversary to the core.

So how’d the negotiations go after that? Well, unfortunately for everyone else, each leader just acted like their news had, in fact, shaken the other one. So they both pressed hard at nearly every negotiating point, increasing the friction for everyone. Some important matters, like the parameters of Germany’s post-war government, had to be tabled until a future conference. But some important agreements were reached, including that German war criminals would be arrested and tried.

Because if there was anything the Americans and Russian could agree on, it was “Screw the Nazis.”