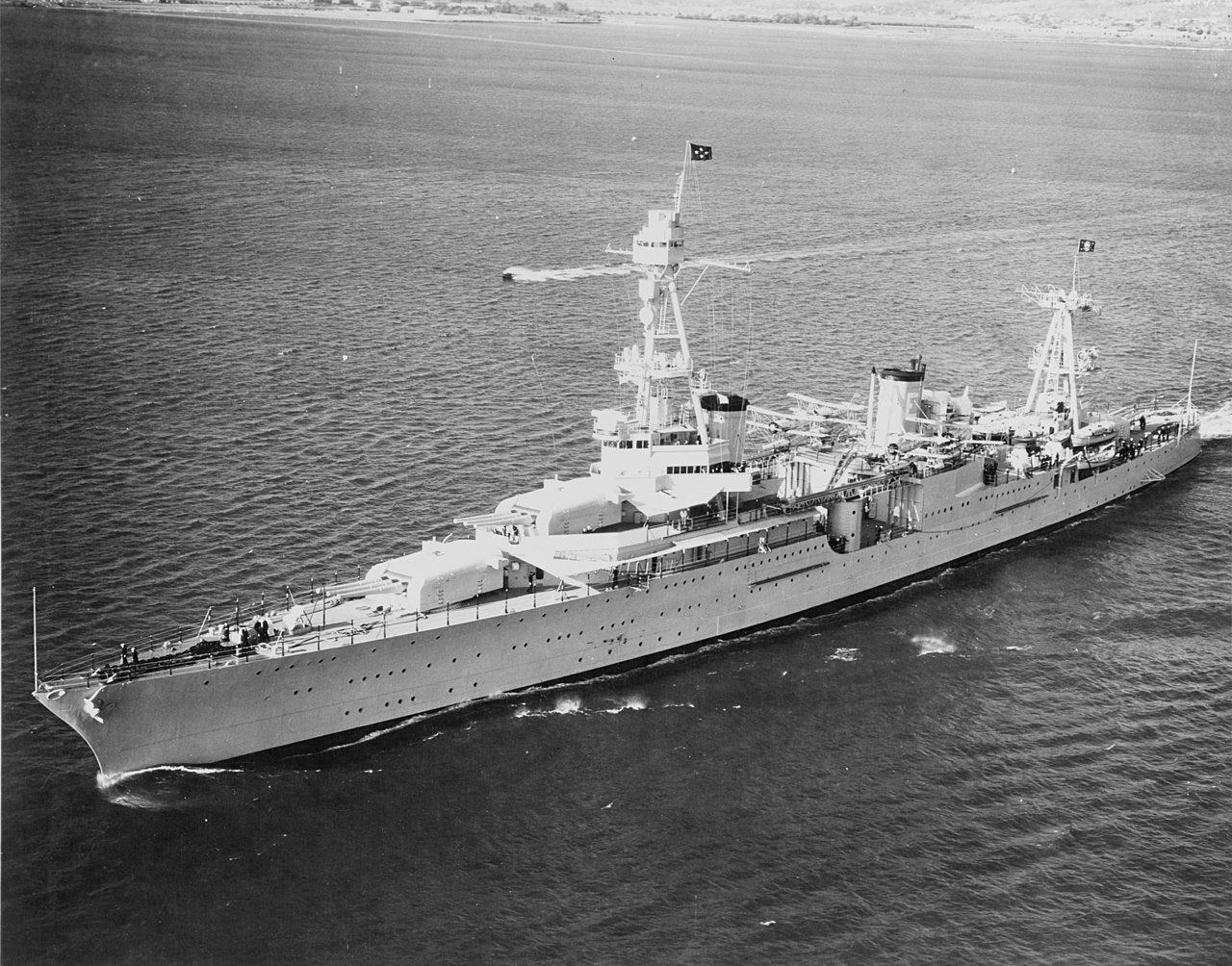 USS Houston (CA-30), off San Diego, California, in October 1935, with President Franklin D. Roosevelt on board. She is flying an admiral's four-star flag at her foremast peak, and the Presidential flag at her mainmast peak.

The USS Houston was launched in 1929 as a light cruiser, but the treaties signed after World War I required the United States to list it as a heavy cruiser. In the war to come, it didn’t matter what its designation was, the Houston punched well above its weight class. The fighting ship and its crew were so notorious to the Japanese that even after it was sunk in 1942, they didn’t fully believe it.

Six times after the battle where USS Houston finally met its fate, low on ammo and listing, the Japanese Navy reported seeing it in combat and sinking it, again and again. It earned its nickname, “The Galloping Ghost of the Java Coast,” after it was sent to the bottom of the Pacific Ocean.

After the Japanese attack on Pearl Harbor, USS Houston was bound for Australia and would meet up with an Allied naval force at Surabaya. Almost immediately the guns of the Houston were firing, as by February 4, 1942, it was shooting down enemy aircraft at the Battle of Makassar Strait.

It was next assigned to convoy duty, protecting troop ships bound for Timor from waves of Japanese bombers. The Houston’s gun crews were so skilled at keeping up a high rate of fire that observers described Japanese planes as flying into a “sheet of flame.”

The Allied fleet soon got word that a large Japanese invasion force was headed for Java, protected by powerful surface ships. The admiral in command of the fleet decided to intercept the invasion fleet with five cruisers and ten destroyers. The resulting Battle of the Java Sea was a failure for the Allies, costing two light cruisers, three destroyers, and more than 2,300 sailors.

Houston and the HMS Perth were able to come out of the intense exchange of fire and torpedoes intact, but much of the rest of the fleet was either damaged or destroyed and had no destroyer protection. At the time, the Battle of the Java Sea was the largest surface engagement since the Battle of Jutland in World War I.

On their own, Houston and Perth were forced to make their way back to Surabaya, low on fuel and ammunition. They made it as far as Tanjong Priok in Indonesia. Unfortunately for the Allied ships, ammunition and fuel were low in Tanjong Priok as well. They were ordered to set sail for the Javanese port of Tjilatjap, which was supposed to have the supplies they needed.

Their journey took them through the Sunda Strait, which was supposed to be cleared of any enemy activity. No one knew a large Japanese naval force had assembled at Bantam Bay, which was directly along the route the two Allied ships were supposed to take.

At around 2300 hours, a lookout aboard Perth sighted a Japanese destroyer, and the two ship immediately engaged with it. They were soon surrounded by other ships of the enemy fleet and were quickly surrounded. With a cruiser squadron blocking their movement through the strait, the ships were forced to do battle with two heavy Japanese cruisers. Dodging torpedoes and other fire, the Perth tried to fight its way through but was sunk by just after midnight. Aboard the Houston, ammunition was running low and was firing its eight-inch shells when it was hit by a torpedo. The Houston began to list and finally sank. Three hundred and sixty eight sailors and Marines survived only to be interned in prison camps for the duration of the war.

For the rest of February 1942, Japanese ships radioed by to headquarters, claiming to have sunk the USS Houston. It happened at least five more times after the actual sinking of the American ship.