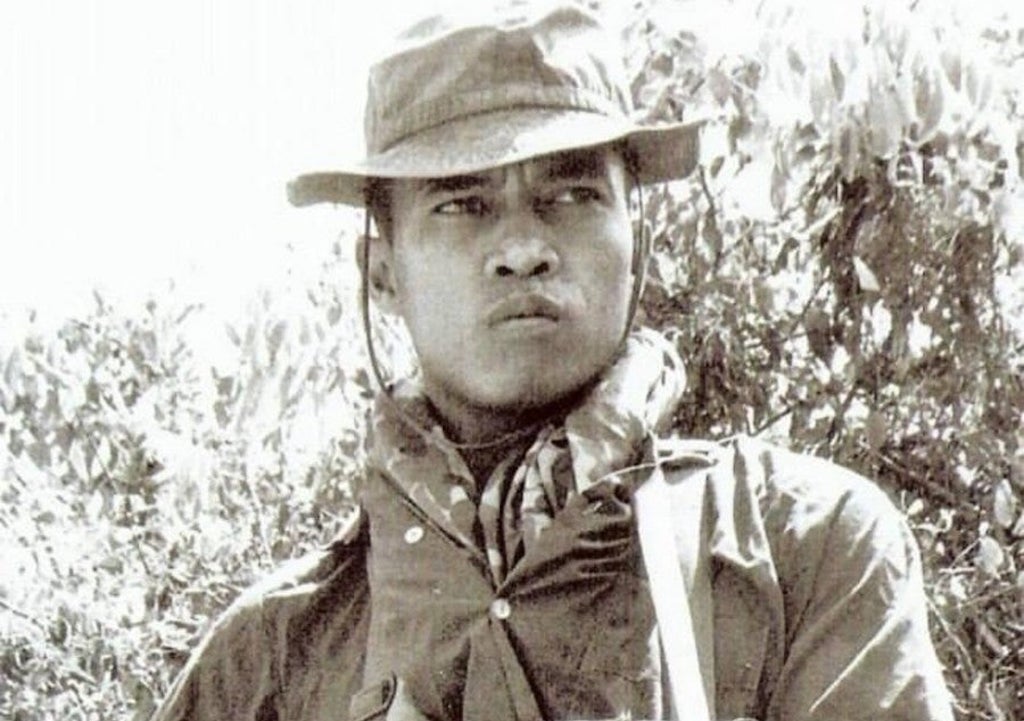 Between 1965 and 1970 a lot of changes happened during the Vietnam War. One thing that didn’t change during that time period was Patrick Gavin Tadina. Tadina was a Hawaii native who would not only become one of the most decorated soldiers of the Vietnam War, he would also be the longest-serving Army Ranger ever.

Which is a pretty big accomplishment for a guy who spent five straight years leading long range patrols in the hottest war zone of the day. While there, he served with the 173rd Airborne Brigade Long Range Reconnaissance Patrol, 74th Infantry Detachment Long Range Patrol, and Company N (Ranger), 75th Infantry. He could often be found wearing the distinctive “black pajama” uniform of the Viet Cong and North Vietnamese Army and sporting an AK-47.

A Long Range Reconnaissance Patrol, or LRRP, was one of the most dangerous missions in the entirety of the Vietnam War. Each infantry brigade had at least one by 1967, whose mission it was to go deep into the jungles and assess the enemy strength – even if the mission went behind enemy lines.

By 1969, all LRRP units were folded into the newly formed 75th Infantry Regiment (Ranger), a predecessor of the 75th Ranger Regiment. It was the first time since the Korean War that the Army formed ranger units. Most of the members had to pass through “Recondo” school, a training regimen that was almost as dangerous as the war itself.

His look that emulated the enemy uniform, combined with his small stature, often helped him pass for one of the enemy’s soldiers, when the time came. It was a camouflage perfect for his deep recon missions into Vietnam’s central highlands.One of his trademark moves against an enemy formation was to pretend to take a point position and lead them into an ambush set up by his fellow Americans.

Not only did Tadina make it out of five years in Vietnam alive, but more than 200 men would come forward over the years, claiming they served with him and crediting him for getting them through their tour of duty without a scratch. Tadina wasn’t so lucky. He was shot three times over the course of the war, and his only brother was killed in combat there.

In one instance, he was leading his team as point man when they walked into an enemy ambush. But the entrenched communists didn’t open fire. Upon seeing Tadina, they became as confused as he was. As the old saying goes, “he who hesitates is lost.” Tadin opened fire instead, falling to the ground as he was shot in both calves. His unit was spared an ambush as he refused medical attention.

“When you’re out there in the deep stuff, there’s an unspoken understanding,” he told Star and Stripes in 1985. “It’s caring about troops.”

It was only after the enemy retreated that he would allow himself to get treated for his wounds, according to the Silver Star citation he would receive for the encounter. In all, Tadina received two Silver Stars, 10 Bronze Stars, three Vietnamese Crosses of Gallantry, four Army Commendation Medals, including two for valor, and three Purple Hearts.

After his Vietnam War service, Tadina deployed with the 82nd Airborne Division in Grenada during Operation Urgent Fury in 1983 and with the 1st Infantry Division during Operation Desert Storm in 1991. He retired from the Army in 1992 and was a 1995 inductee to the Ranger Hall of Fame. After his 30 years in the military, he continued to work, this time as a civilian security officer.