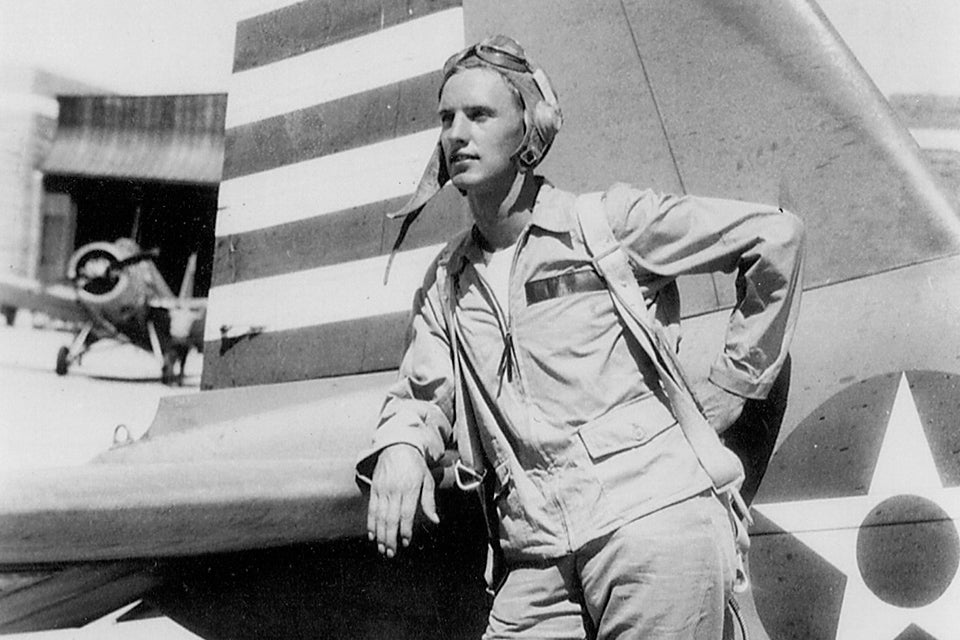 Naval air combat during WWII is often associated with the Pacific theater of the war. So, it may surprise some people to learn that Naval Aviators engaged German aircraft over the Atlantic in the European theater as well. However, only one Naval Aviator has the distinction of earning kills in both theaters to break the 5-kill threshold and earn the title of ace.

Dean “Diz” Laird was 20 years old when the Japanese attacked Pearl Harbor. On January 2, 1942, a few weeks later and just over a month before his 21st birthday, he drove from his hometown of Loomis, California to San Francisco and enlisted in the Navy. Laird entered the Navy cadet program and commissioned as an officer later that year on August 11.

Laird attended flight school at Naval Air Station Miami in Florida. He earned his wings and was designated a Naval Aviator on October 21, 1942, and continued his training to become a fighter pilot. His first fleet assignment was aboard USS Ranger (CV-4) in March 1943. Considered too slow to serve in the Pacific, Ranger was sent to the North Atlantic.

In October 1943, Laird was flying a combat air patrol over Norway in his F4F Wildcat when German aircraft were picked up on radar. Laird and the other Wildcats were vectored to intercept them. However, Laird’s aircraft lagged behind and he missed the flight’s attack on the main enemy formation. This turned out to be good luck for Laird who came across two German planes that the flight had missed. He shot down both aircraft, a Ju-88 bomber and an He 115 seaplane.

After his first sea duty, Laird returned to the United States and trained on the new F6F Hellcat. Following this, he was assigned to the USS Bunker Hill (CV-17) in the Pacific. During his time aboard Bunker Hill, Laird flew as part of a fighter sweep over the Japanese-occupied Clark Field in the Philippines. During that flight, he shot down two Ki-61 Tony fighters, sharing credit for one with his wingman.

In November 1944, Bunker Hill underwent repairs and Laird transferred to the USS Essex (CV-9). The next month, Laird was conducting a strafing run over the Philippines when his aircraft was heavily damaged by enemy fire. With tremendous skill, he nursed his stricken Hellcat 250 miles back to the carrier. Laird’s landing gear was damaged and would not deploy, so he belly-landed his aircraft, skidding it across the deck until it came to a halt.

In January 1945, Laird flew a fighter sweep over Hainan island off the coast of China. During it, he shot down an A6M3 Hamp fighter, a specific model of the infamous A6M Zero. The next month, he shot down a Ki-21 Sally heavy bomber over Tokyo while escorting a flight of American bombers. A few days later, Laird and his wingman chased down a low-flying Ki-44 Tojo fighter, shooting at it until it crashed for a shared kill.

Over the course of WWII, Laird is believed to have shot down six or seven enemy aircraft. Officially, he is credited with 5.75 kills, including partial credit for shared kills. After the war, Laird remained in the Navy and served during Korea and Vietnam. In 1971, after just under 30 years of service, he retired as a Commander. During his naval career, Laird earned the Air Medal with three gold stars, the Meritorious Service Medal, and the Distinguished Flying Cross. In addition to being the only Navy ace with kills scored on both German and Japanese planes, he also holds the record for the most arrested landings on a straight-deck carrier.

Laird now lives in Coronado, California. In 2013, he was inducted into the San Diego Air and Space Museum’s International Hall of Fame. Two years later, he was inducted as a Coronado Hometown Hero on the Avenue of Heroes. That same year, Laird was one of 35 aces who traveled to Washington, D.C. to receive the Congressional Gold Medal awarded to all American Fighter Aces. In 2016, at the age of 95, Laird flew his 100th aircraft off the San Diego coast.