This was the Vietnam War’s longest continuously serving Army Ranger 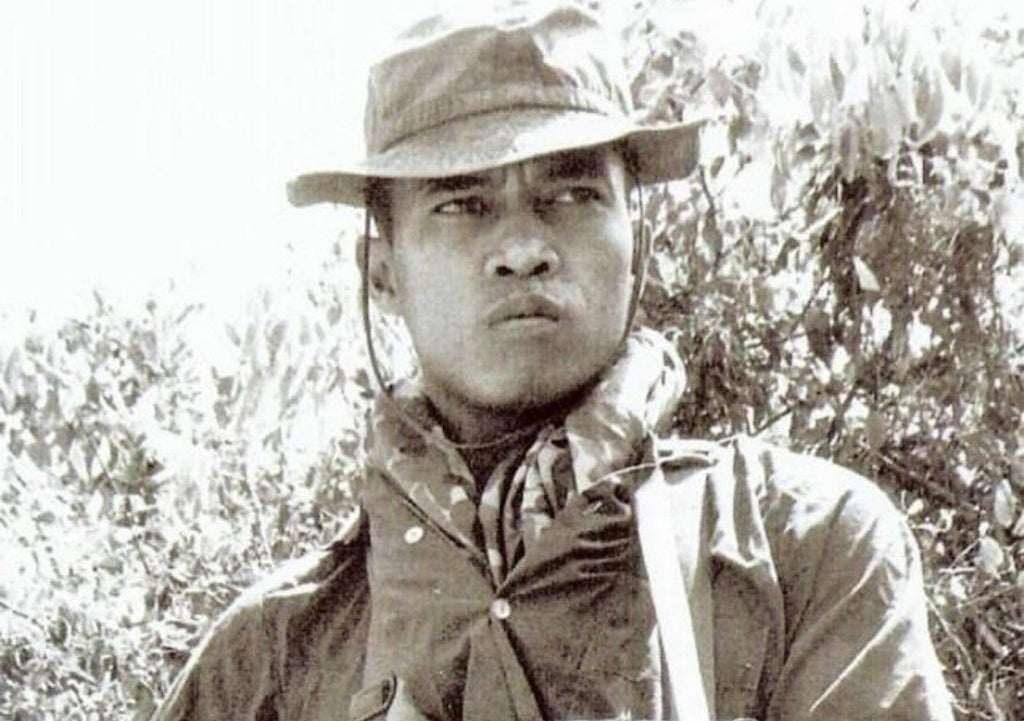 Patrick Gavin Tadina served in the Army for 30 years. He spent a full five of those years fighting as a Ranger in Vietnam. If that wasn’t unique enough, Tadina, who would retire as a command sergeant major, would often do it dressed as the enemy.

Tadina was a trim 5’5” native Hawaiian, a look that would allow him to conduct and lead long range reconnaissance patrols deep into Vietnam’s central highlands. He would sometimes join an enemy patrol dressed in their distinct black pajamas, sandals, and carrying an AK-47.

Patrick Tadina joined the Army in 1962. By 1965, he was in Vietnam with the famed 173rd Airborne Brigade Long Range Reconnaissance Patrol. He also served in the 74th Infantry Detachment Long Range Patrol and Company N (Ranger), 75th Infantry. He was in the country for a full five years, until 1970.

With a trim figure and uniquely nonwhite American looks, he used his appearance to get the jump on enemy forces laying in wait for him in the jungle. He led American patrols dressed as the enemy so they wouldn’t have a chance to ambush his Rangers. When escaping from an enemy patrol, he could lead his pursuers into a friendly ambush.

When spotted by Viet Cong fighters or North Vietnamese regulars, the enemy often had to take a moment to figure out who Tadina was and what he was doing in the jungles of Vietnam. On one occasion, this pause allowed him to warn his fellow soldiers of an ambush, but resulted in Tadina taking two bullets to the legs.

Laying on the jungle floor in that firefight, he refused to give an inch to the enemy. He received a Silver Star for his actions that day.

In five years of fighting in Vietnam, Tadina was shot three times but never lost a man who served under him. It’s estimated that 200 soldiers served with Tadina without a casualty. The legendary Ranger himself was awarded two Silver Stars, 10 Bronze Stars (seven with valor), three Vietnamese Crosses of Gallantry, four Army Commendation Medals (two for valor), and three Purple Hearts.

The stories about Tadina abound on the internet. After his death, friends and fellow soldiers wrote their tributes and memories about the five years Tadina spent in Vietnam:

“Tad infiltrated an enemy hospital to free a POW,” wrote one Ranger. “He killed a guard with a silenced .22 but found the hospital deserted. Talk about balls and trade craft.”

After the Vietnam War, Tadina stayed in the Army. He would take part in the most significant combat actions in the post-Vietnam world. He served with the 82nd Airborne Division in Operation Urgent Fury in 1983 and with the 1st Infantry Division during Operation Desert Storm in 1991. He retired from the Army in 1992.

In 1995, Patrick Tadina was inducted into the Ranger Hall of Fame in Fort Benning, Georgia. Although he continued to work in the combat arms field in some of the post-9/11 world’s hotspots, he struggled with mental issues in his later years.

He died in 2020 at age 77, still one of the Vietnam War’s most decorated enlisted soldiers and an unforgotten icon among the U.S. Army’s Rangers, past and present. Although Tadina has passed, his legend will never die.