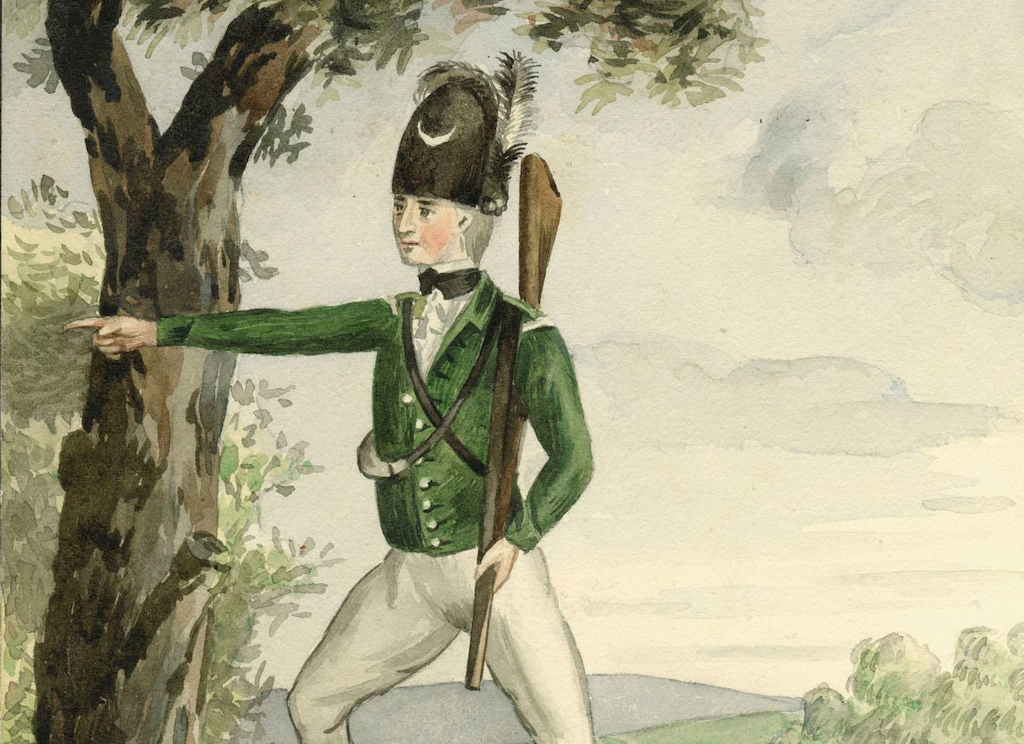 A Rifleman of the Queen's Ranger, ca. 1780 from John Graves Simcoe's Military Journal.

During the French and Indian War, while the American colonies were still subject to the British Crown, Robert Rogers recruited his own light infantry force that was unparalleled at gathering intelligence for British operations. Though the ranks of his small band eventually numbered more than a thousand because of their effectiveness, they were never really accepted by the British.

If there was one unit the French and native tribes in the Great Lakes feared during America’s colonial period, it was Roger’s Rangers. The British Army might have scoffed at Rogers’ unconventional tactics, but unlike most of the British professional armed forces, his Rangers could operate in the harshest of climates.

It was so effective at what it did, it established the 28 Rules of Ranging, which would later shape the development of today’s U.S. Army Rangers. Yet, when the same colonies declared independence, Rogers personally remained faithful to the crown – but not all of his ranger would.

In the French and Indian War, Rogers led his rangers to a string of victories over the French in the area of Lake Champlain. He famously delivered a drubbing to the French in the First Battle on Snowshoes, killed Indian chiefs, and were responsible for sending hundreds of enemy foot soldiers home on stretchers and in body bags.

The Rangers’ most famous battle was the destruction of Saint-Francis, an Indian settlement in Quebec. At the cost of just one ranger killed, they dispatched 200 enemy tribesmen and scattered the rest of the village outpost. They then spent the rest of the war, destroying supply depots, interrupting French supply lines, and generally being a nuisance to French resistance.

After the war, in 1761,  the rangers were disbanded, but they weren’t out of fighting for too long. In a few short years, the American colonies would declare independence. Soldiers like Rogers’ Rangers were still primed for a fight, so Rogers offered his services to the Commander-in-Chief of the Continental Army, George Washington.

In a surprising move, the General who had fought in the French and Indian War as a young officer, and knew the value of Rogers and his Rangers, turned Rogers’ offer down. Rogers had just returned from a trip to England, where he was celebrated as a hero and author. This particular trip to England wasn’t good for Rogers, however.

The famed ranger was constantly at odds with Britain’s top military leader in North America, Gen. Thomas Gage. Gage had charged Rogers with treason, which forced Rogers to defend his good name in England. Rogers would end up in a debtor’s prison for a long time, meaning he missed the events that led to the colonies’ declaration of their independence from Britain.

So having returned from England, where Rogers had professed his loyalty to King George III, Washington was worried that Rogers was a spy. Washington had the ranger arrested as such. But Rogers escaped and made his way to the British Army, where he offered his services to the king instead.

Rogers formed the Queen’s Rangers, a new unit akin to the old Roger’s Rangers. His most famous act against the new country was the capture of Washington’s spy Nathan Hale. He pretended to be a patriot spy and coerced Hale into outing himself.

After the war, Rogers could not stay in the new United States and left for England and Canada. He was forced out of the Army due to poor health and would later die in debt as an alcoholic in England. His legacy lives on in the form of the U.S. Army Rangers, one of America’s most elite fighting forces.