The story of Thomas Norris, a forgotten Navy SEAL - We Are The Mighty

The story of Thomas Norris, a forgotten Navy SEAL 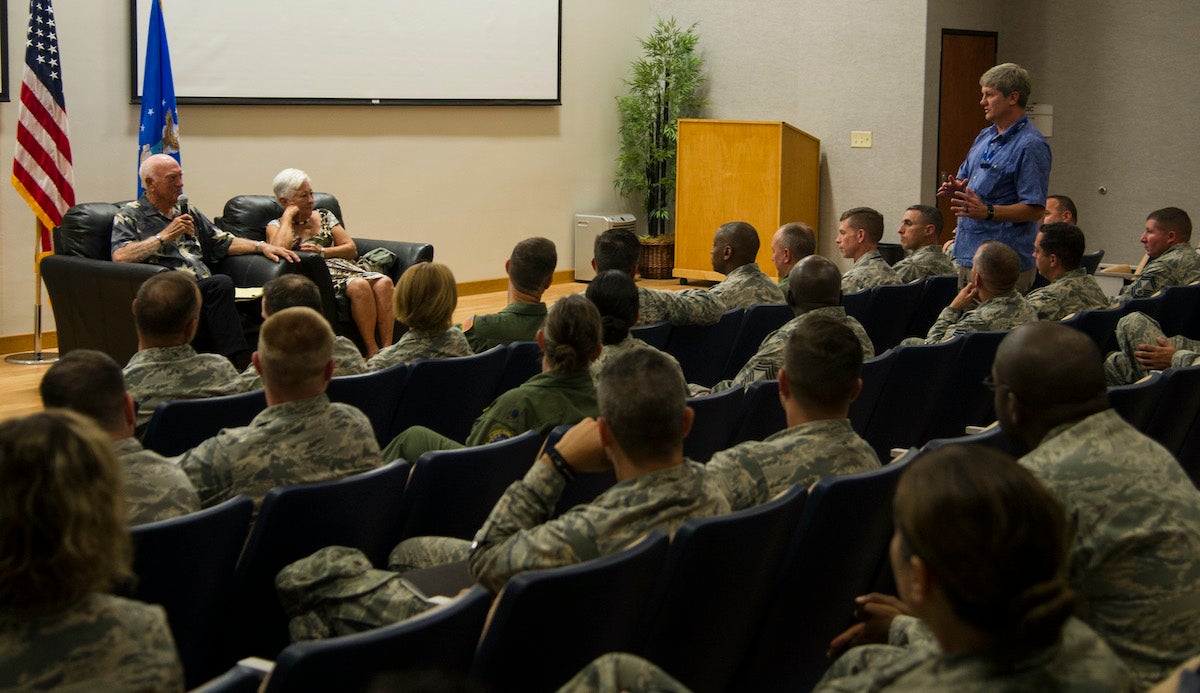 Retired Air Force Col. Thomas Norris, a former prisoner of war, answers a question from the audience Aug. 14, 2017, at Hollister Auditorium, Joint Base Pearl Harbor-Hickam, Hawaii. Norris shared his experience as a POW during a speech to senior leaders on individual readiness and resiliency. (U.S. Air Force photo by Tech. Sgt. Heather Redman).

On March 30, 1972, 14 North Vietnamese Army divisions crossed over the DMZ. The attacks would later be known as the Easter Offensive. Three days later, on Sunday, April 2, a US Air Force EB-66 radar-jamming aircraft was shot down just south of the DMZ in enemy-controlled territory. The crash killed five crewmen. The one lone survivor, Lt. Col. Iceal B. Hambleton, parachuted out of the aircraft into an area thick with NVA troops.

Bat 21, as Lt. Col. Hambleton was known by his call sign, was immediately part of an Army helicopter rescue attempt near the Cam Lo bridge over the Mieu Giang River. But that helicopter was also shot down, and all four personnel aboard died. So the Army tried again, but once more, the chopper was shot. This time, it was so badly damaged that it had to crash land after escaping heavy NVA fire.

The next morning, April 3, Air Force pilots circled about Bat 21’s presumed location to drop mines and keep the enemy from swarming him. Conditions were dire, and there were growing concerns that a rescue attempt might not be successful. Two more Air Force search and rescue helicopters were so badly damaged by enemy fire that both had to withdraw.

Not prepared to give up, the Air Force sent out an OV-10 Bronco spotter plane to assist with the rescue, but that too was shot down. Capt. William Henderson and 1st Lt. Mark Clark both parachuted to the ground near the river.

Three more rescue attempts failed, and by nightfall on April 3, Capt. Henderson was captured. He would spend a total of 369 days as a prisoner of war. During the course of the next seven days, Lt. Col. Hambleton and 1st Lt. Clark would become the focus of the most intense and costly rescue efforts of the entire war.

The following day, eight fighter planes sustained battle damage, and one was completely destroyed. Two days later, on April 6, 52 sorties (attacks made by troops coming out from a position of defense) and four B-52 bombers obliterated the area. Helicopters flew around in an attempt to locate Hambleton and Clark for rescue.

The helicopter was struck by enemy fire, and all six aboard were killed. One day later, another AF OV-10 circled the area but again, was shot down, and both airmen were lost. By the 9th of April, it was clear that Hambleton and Clark couldn’t be rescued by air.

Enter Navy SEAL LtJG Thomas R. Norris. Norris was assigned to lead a team of five SVA navy commandos in a ground rescue. Norris was a veteran of Vietnam and had been in-country for over a year.

Nightfall, April 10: Norris takes his team out in search of Clark. He’d planned to swim upriver, but the current was too strong. So Norris advised Clark to float down to them. Clark did so, and Norris was able to retrieve him and take him to safety.

Three days later, Norris and a member of his team went upriver to a bombed-out village and found a sampan. In complete darkness, they went in search of Hambleton. The sailors found the airman and hid him in the bottom of the boat, hoping they might look like fishermen. But then they came under heavy NVA fire and pulled to the shore to call for air support. Smoke cover and friendly fire allowed the men to return to the river and reach a safe position, all the while carrying Hambleton, who could no longer walk.

In October, Norris was nearly killed when he was shot in the head during an intelligence-gathering mission. The actions of fellow SEAL Michael E. Thornton saved his life. For those gallant efforts, Thornton was awarded the Medal of Honor. After three years of hospitalization, Norris was also awarded the Medal of Honor. However, in broad reviews of the conflict, his name is not widely discussed or known.