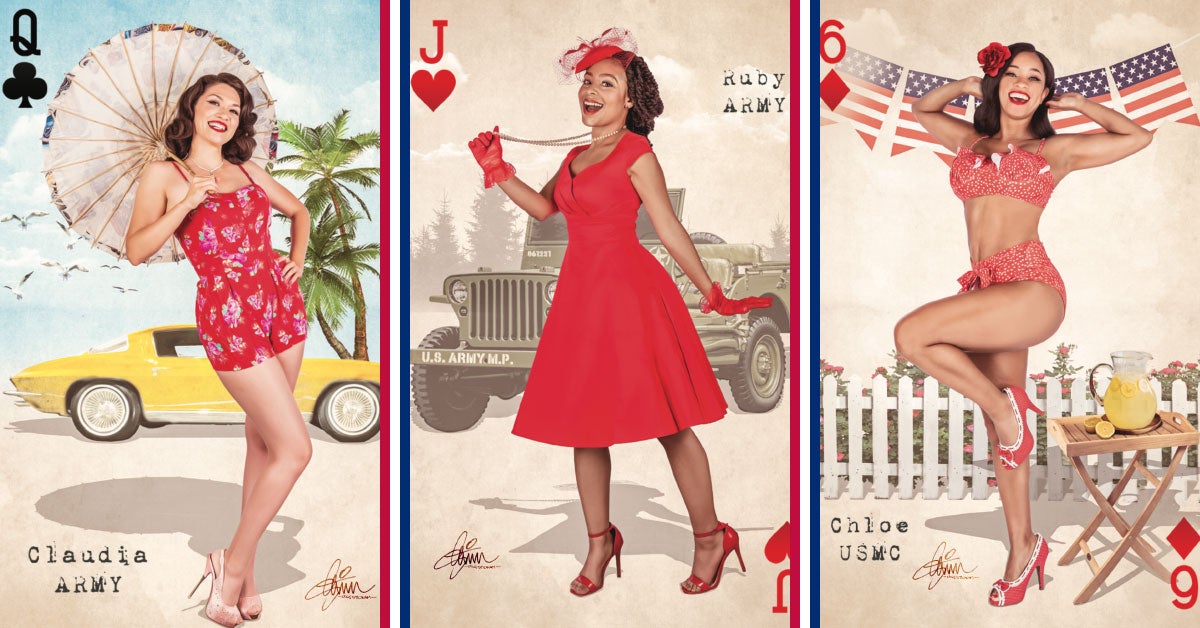 Pin-Ups for Vets, a non-profit organization that helps hospitalized and deployed service members and their families, has released a deck of cards featuring 54 female veterans — and each one is an absolute work of art. Photographed and edited in U.S. Marine Corps veteran Doug Stidham’s signature style, the vets show off classic pin-up poses inspired by World War II nose art.

The non-profit recently crossed a threshold of over $100,000 of rehab and medical equipment donated to VA and military hospitals. Their main fundraiser is an annual pin-up calendar featuring veteran models, but this year they expanded their efforts with their timeless new deck.

The collaboration took over a year to accomplish. Pin-Ups for Vets founder Gina Elise — who is also featured on the packaging and two bonus cards — brought the idea to Stidham early in 2021. In the spring, he was up and running and by July he had coordinated photoshoots with 54 veterans, including long days at the Hollywood American Legion Post 43.

Stidham is a long-time friend to Pin-Ups for Vets, collaborating with veterans to shoot morale-boosting images and even designing fundraising posters featuring veterans for the organization. A combat veteran of the Gulf War, Stidham brings his patriotism and passion to his photography.

“Photographing Veterans is special to me because we connect on a certain level,” he told me.  “We have a camaraderie. It’s like a brotherhood/sisterhood. It feels like a family. Some of the ladies have never done a pin-up shoot, so I have to get down in the trenches and show them how to pose. Pin-up posing is very stylized and specific to the 1940s. By the end of the shoot, they are having so much fun. I love how happy the ladies are when they see their final images.  I think that it may give them an awesome morale boost!”

Stidham spent the summer and fall of 2021 selecting and editing the images — finishing just in time for the Marine Corps Birthday. Then he and Elise got to work designing the box and the Jackpot Poster featuring every card in the deck.

The final product is truly stunning.

“I have never created a project as significant as this,” shared Stidham. “When I first saw the actual deck, it was surreal for me. I couldn’t believe how beautiful the project turned out! I am very humbled to be able to team up with Pin-Ups For Vets in order to support my fellow veterans. It’s an honor to be able to fundraise to support hospitalized Veterans and deployed troops!”

Spice up game night, make your next poker tournament a little more patriotic, and help out the military community by heading over to the Pin-Ups for Vets online store and ordering your deck.