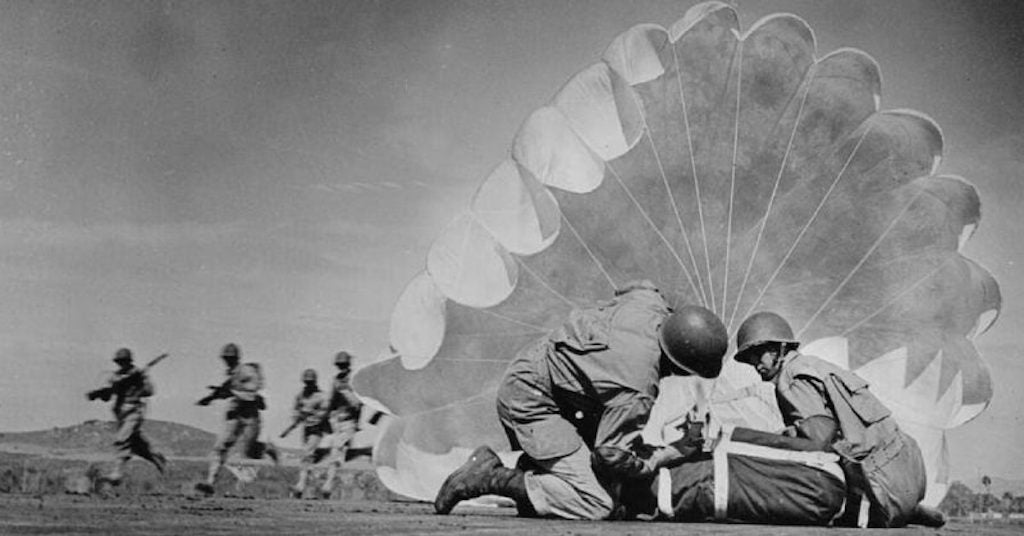 By the time the United States entered World War II, the way the world fought wars had changed. Aircraft found more and more powerful uses, horses had given way to mechanization, and all sides found creative ways to break potential stalemates, like those on the battlefields of the previous world war.

The paratrooper was one of those creative solutions, not only in getting troops into a fight, but to also change the ways wars were fought. The ability to insert ground forces by air anywhere in enemy-held territory was a breakthrough for both sides and was used extensively.

Skies filled with hundreds of open parachutes would become one of the war’s iconic images, from places, including the German invasion of Crete, the Normandy Landings, and Operation Market Garden. The image of the World War II paratrooper has also become almost synonymous with WWII, even though paratroopers were used after the war and are still trained today.

The idea of a paratrooper’s “yellow” gloves is misleading. They were a holdover from the first world war, a throwback to the days of horses and horse cavalry. These gloves were actually made of rawhide, a surplus of rawhide gloves leftover from World War I. They only appeared to be dyed yellow because of the surplus material from which they’re made.

After World War I, American military leadership did away with horse-mounted units in favor of mechanized ones, especially tanks. Since horses were no longer needed in combat, their roles were relegated to mostly ceremonial duties and the numbers of horses and their handlers dropped considerably. The military was left with a huge surplus of horse-handling equipment, especially gloves.

When the United States finally entered World War II in December 1941, it came as kind of a surprise. Tensions had been high with the Japanese Empire, but the U.S. military wasn’t expecting a war so soon. War production had yet to ramp up to its full “Arsenal of Democracy” level, so Army quartermasters were struggling to fill strategic needs. One of these was outfitting troops with the necessary uniform items.

Among the things that were pulled out of storage for the new war were thousands of crates of rawhide gloves that were surplus from World War I. They weren’t all alike, some of them were unlined, others lacked wrist straps, but beggars can’t be choosers when supply can’t meet demand.

Those units who required protective gloves got first crack at the “new” gloves. These included armor units, soldiers who rappelled, and airborne paratroopers. The gloves were especially required for these fields because of their proximity to hot surfaces, including engines for the armor, and friction created by using ropes. No matter how hot the ropes get, the rawhide will protect the hands of the soldiers.