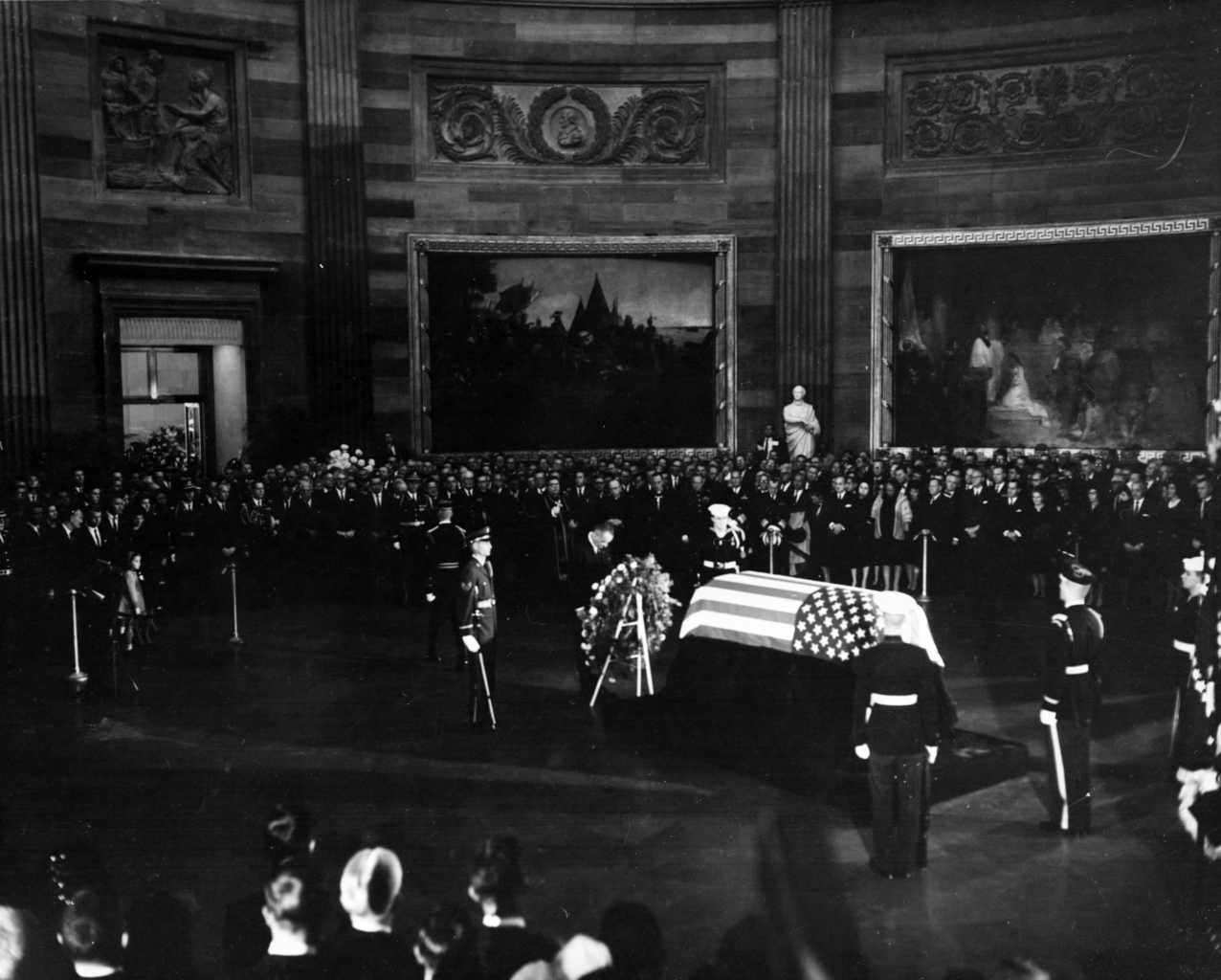 Photograph of President Lyndon B. Johnson placing a wreath before the flag-draped casket of President John F. Kennedy, during funeral services for Kennedy in the Capitol rotunda. (Public domain).

President John F. Kennedy was fatally wounded by a shot fired from the Texas book depository while on an official visit to Dallas Texas in 1963. His assassin was Marine Corps veteran Lee Harvey Oswald, a marksman who fired the shot with a mail-order Carcano rifle. JFK was rushed to Parkland hospital, where he was pronounced dead 30 minutes later.

Just after 2 p.m. that day, Kennedy’s body was transported from the hospital to Dallas’ Love Field, where his casket was loaded aboard in the passenger section of Air Force One. Two days after the shooting, the fallen President’s coffin was lying in state at the U.S. Capitol Building. He was not in the same casket that took him from the hospital in Dallas.

That casket was laying at the bottom of the ocean.

At 12:30 p.m. on Nov. 22, 1963, John F. Kennedy was shot in the head as he rode in a motorcade with the state’s governor through Dallas’ Dealey Plaza. As the bullets were being fired, the car carrying the President, Governor John Connally, and their wives sped away from the scene, making a beeline to treat the wounded President’s injuries.

By the time they arrived at Parkland hospital President Kennedy was dead. It was only 30 minutes after the shooting. The Secret Service was eager to get the remains of the slain President back to Air Force One and back to Washington. There was a new President already sworn in and the nation was in mourning.

As the investigation got underway, someone at the hospital called Vernon O’Neal of O’Neal’s Funeral Home in Dallas. The man wanted the best casket O’Neal had available to be rushed to Parkland Hospital as fast as possible. The owner chose a solid bronze model, lined with white satin that cost $3,995 – more than $36,000 today.

The casket was a Handley Britannia model by the Elgin Casket Company that weighed in at over 400 pounds. O’Neal needed the help of his employees to load the casket into the hearse. By the time he arrived at the hospital and saw the condition of the body he was there to load into the premium coffin, he was shocked at what he saw.

Kennedy’s wound was profuse with blood, still oozing from his remains. To preserve the integrity of the casket, he and the nurses wrapped the President’s body in linen sheets and lined the coffin with plastic so that blood would not seep through to the lining. It did little to preserve the quality of the interior. Kennedy’s autopsy would be conducted at Bethesda Naval Hospital near Washington, at the request of the now former First Lady.

When doctors in Bethesda opened the bronze casket, they saw that Kennedy’s remains were not limited to the makeshift protective lining set up by O’Neal in Dallas. By the time the body was embalmed and presentable, O’Neal’s casket was a mess and would not be used for the President’s viewing in the Capitol. The funeral home that embalmed Kennedy took the casket. Not knowing what to do with it, they kept it for more than a year.

Back in Dallas, Vernon O’Neal was arguing with the U.S. government over the price tag of the coffin. The government felt it was excessive, but even after O’Neal lowered the price, the two sides remained at an impasse. What O’Neal really wanted, however, was the coffin returned. He was getting offers for more than $100,000 for it – nearly $1 million today.

The federal government, to prevent the casket from falling into the hands of the “morbidly curious,” paid O’Neal his $3,495, then turned it over to the U.S. Air Force, who drilled holes in it, filled it with 80-pound sandbags and crated it before dropping it into the Atlantic Ocean 100 miles East of Washington, D.C. President Kennedy, A Navy veteran of WWII, had once considered a burial at sea.