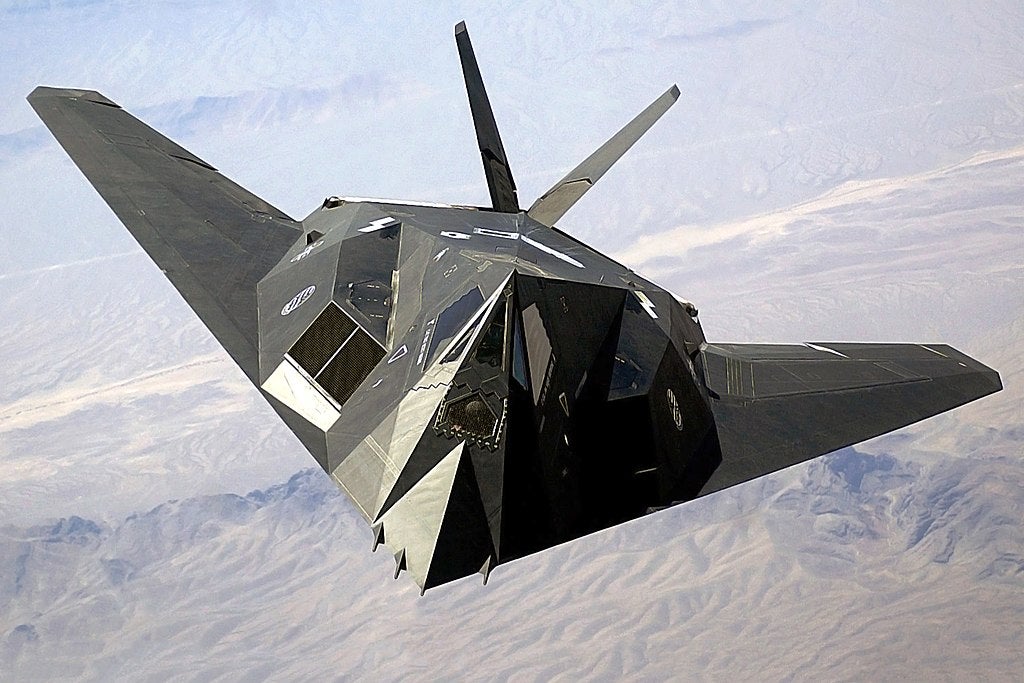 The F-117 Nighthawk was the U.S. Air Force’s first operational stealth aircraft. It made its maiden voyage in 1981 and reached operational status by 1983. Nighthawks participated in the U.S. invasion of Panama, Operation Just Cause, in 1989, but were widely celebrated for its role in the Gulf War of 1991.

They also fought in the skies over Yugoslavia in the late 1990s, but by the early 2000s, the F-117 all but disappeared. By 2008, the Nighthawks were completely retired after just 27 years in service. Compared with planes the B-52, the C-130 and the KC-135 Stratotanker, it made for a relatively short service life.

Like many aircraft with similarly short service lives, the reason for taking the F-117 out of service is due both to inherent design issues and the rise of new weapons systems made to replace the Nighthawks.

From the start, the stealth design for the F-117 took the focus off of aerodynamics in favor of a smaller radar cross section. The plane has a cross-section of less than a square foot, but the exchange made it aerodynamically unstable in its roll, pitch and yaw axes. This means it requires near continuous flight corrections from its multiple fly-by-wire flight systems to maintain control.

As if that wasn’t bad enough, the Nighthawk had what developers at Lockheed called a “wing failure” problem. Its aerodynamics could sometimes force the wing and tail sections to come apart, an inherent flaw in the airframe design.

It also had technological limitations. The F-117A doesn’t carry radar because it helps lower its emissions and increases stealth. The plane also has no afterburner, no guns, and a bomb bay capable of carrying only four 1,000-pound bombs. Although the Nighthawk was an excellent “1.0 version” of the stealth planes to come, these limitations would doom its long-term effectiveness.

With the rise of supercomputers able to calculate radar cross sections while maintaining aerodynamic ability, as seen with the B-2 Spirit bomber, the Air Force was able to create more and better aircraft, better equipped for combat while maintaining necessary stealthiness. The coup de grace for the Nighthawks wasn’t the Stealth Bomber, however, it was a pair of upgraded fighters.

In the late 1990s, while the Nighthawks were flying missions over Yugoslavia, the Air Force quietly began testing and flying a new Lockheed-made fighter aircraft, the F-22 Raptor. A true air superiority fighter, the Raptor carried air-to-air missiles, a 20-millimeter vulcan cannon and the possibility of carrying air-to-ground bombs.

More importantly, the F-22 Raptor’s stealth integrated the latest in technology, which included lower emissions, infrared and acoustic signatures, and even lowering the profiles of such details as the plane’s engines and the pilot’s helmet.

F-117s flew missions over Iraq and Afghanistan during the Global War on Terror, but the Air Force decided to retire the aircraft in oder to use the saving to purchase more F-22s. By 2008, the Nighthawks were out and the F-22s were in. Meanwhile, the F–22’s own replacement was in development, an even more advanced airframe called the F-35 Lightning II.

Other aircraft had shorter service lives, including the F-101 Voodoo, the F-111 Aardvark and the F-105 Thunderchief, but their lives were cut short for the same reasons: operational needs combined with obsolescence. It doesn’t take anything from their accomplishments, but time comes for us all.