Theses heroes give back through extraordinary adventure - We Are The Mighty

7 continents in 7 days: Heroes give back through extraordinary adventure 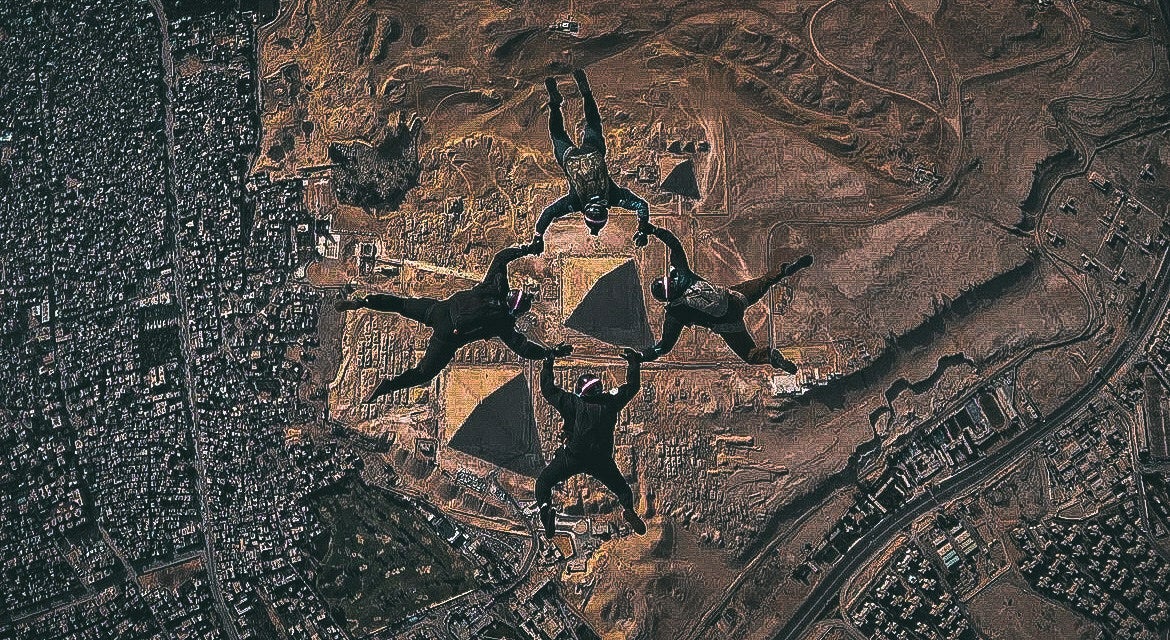 Mike Sarraille, Andy Stumpf, Fred Williams, and Glenn Cowan skydive into the pyramids in Cairo Egypt in their fifth jump of the Triple7 expedition.

A distinct group of veterans came together to attempt breaking a world record with a mission: remember their fallen comrades and gather funds for Folds of Honor. The nine Americans were joined by a former Canadian service member. They had a precise schedule to strictly abide by to complete their skydiving mission. The fundraiser event was organized by Legacy Expeditions, an extreme expedition company founded by two former Navy Seals, Mike Sarraille and Andy Stumpf. Now that they’ve broken not one, but two world records, let’s look at the extraordinary adventure.

Adventure on 7 Continents in less than 7 days

The team started their jumps in the freezing Antarctica on January 9, 2023 in Union Glacier Camp, followed by a jump in Santiago, Chile, to mark off South America. Then the team skydived in Miami, Florida (North America) and moved on to the beautiful city of Barcelona, Spain, to get Europe off their list. Next, a significant jump was made in Africa, jumping literally over the Pyramids in Egypt with a fantastic view and followed by Abu Dhabi, United Arab Emirates representing Asia. Finally, the conclusive jump was made in Perth, Australia, and the clock stopped at 150:06:46.60 hours or 6 days, 6 hours, and 6 minutes.

This set a new world record for the fastest time to skydive on seven continents. Additionally, a duo of the team, Nick Kush and passenger Jim Wigginton achieved a world record for the quickest time to tandem skydive on all seven continents – six days and seven hours. A vast improvement from the previous 6-month record held by Wigginton himself! Quite a feat for a veteran and a 73 year old. Even more remarkable to achieve such a world record with a noble goal!

Each team member had the opportunity to select a fallen United States Armed forces member to dedicate each jump to a hero. The first jump was dedicated to Petty Officer 2nd Class Michael Monsoor, U.S. Navy SEAL, followed by:

The final commemorative jump, not part of the world record, was carried out in Tampa, Florida, in honor of the 13 service members fallen during the withdrawal from Afghanistan on August 21, 2021. The United States Special Operations Command home station was a fitting destination to culminate this unique expedition.

But if the feat looks easy, it wasn’t. It took the team 100 hours of travel time (80.5 hours in the air), an astonishing 16 flights, and over 456 hours away from their families. The sleepless days and nights took their toll on the team, but they never thought about giving up. Andy Stumpf, the host of the Cleared Hot podcast and one of the expedition’s team members, told Coffee or Die Magazine: “Everybody’s very tired. So, the mood is probably more muted than most people would think. I think it’ll take a few days – if not weeks – for it to settle in on what we were able to do.”

Still, you can’t help but notice that these veterans love to live on the edge and the adrenaline is an ingredient they cannot live without.

The team set a goal to raise 7 million dollars towards funding 1,400 scholarships for Folds of Honor. This unique organization was established by retired U.S. Air Force Lt. Col. Dan Rooney after witnessing the fallen hero’s impact on his family. He saw the 4-year-old son of Corporal Brock Bucklin waiting for his father’s flag-covered casket on the tarmac of the Gerald. R. Ford Airport in Grand Rapids, Michigan.

Touched with mixed emotions of sorrow and pride, Dan Rooney dedicated his time and energy to establishing Folds of Honor. Since 2007, they have awarded over 44,000 thousand educational scholarships to the families of America’s heroes. In addition, the Triple Seven expedition supported the cause by aiming for another $7 million. While they still have some ways to go, they have definitively raised awareness and made headlines, reminding everyone of the cost of freedom and the obligation to help the families of the fallen heroes.