The US military used compressed air for vaccines for 30 years

The US military used compressed air for vaccines for 30 years 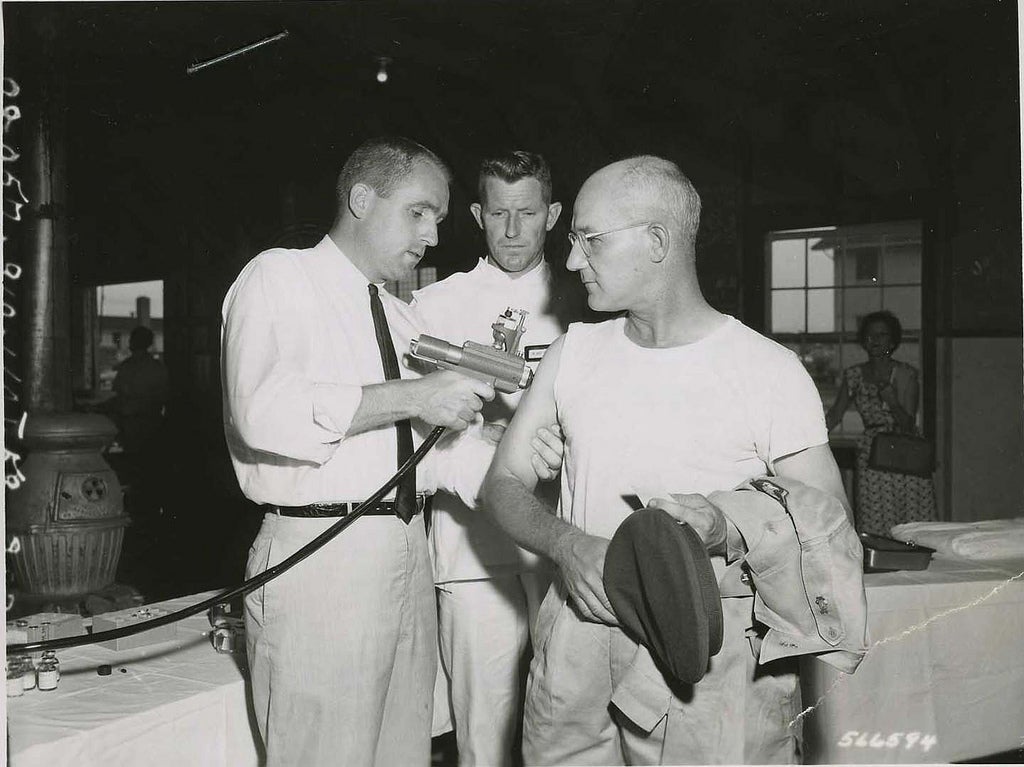 We all watched it happen on “Star Trek: The Next Generation.” Whenever a member of the Enterprise crew needed an injection, Dr. Crusher simply grabbed a hypospray and delivered the drugs, vaccine or whatever medical-plot device was necessary into the crew member’s neck, no needle required.

At the time, we may have been thinking that it would be nice to have such medical trek-nology, hoping one day doctors come up with a way to make it happen. By the time we got into the military and ran the gauntlet of basic training injections, we cursed the same medical gods who made us get a plethora of injections (including the dreaded “peanut butter” shot) with a needle.

It turns out that this kind of medical technology not only exists today, but has been in existence for decades and the military had used them  since the 1960s. We may not call it a hypospray, although we should, but the jet injector can make injections in the skin, fat, and muscle tissue of humans, all without a needle.

Jet injectors create a stream of whatever medical fluid is being injected using pressure. The pressure is created by a piston in the enclosed fluid container by either using springs, compressed air, motors, or even good old-fashioned elbow grease to push the liquid through the skin to wherever it’s supposed to be going.

Call it what you like, Jet Injector, Air Gun, or Pneumatic Injector, they basically operate the same way. The high pressure liquid goes through the pores of the skin, allegedly without the pain of a needle. They were used in mass-vaccination efforts, like the one used to eradicate Smallpox, to great success. They were also an available alternative for diabetics who routinely required insulin injections.

There was a catch, however. The World Health Organization called for an end to the use of jet injections for all purposes because of safety issues, especially for vaccination. The risk of retransmitting disease turned out to be much higher using jet injectors versus traditional needle syringes.

But the idea of hyposprays and jet injections are making a comeback, this time with mitigating the safety risks of the old style of jet injections. Like syringes and other single-use medical technologies, protective caps are being created to bring new life to the jet injection. Protector caps were discarded after use on one patient and replaced with a new one for the next.

Sadly, studies showed initial protector caps failed to inhibit infections in many patients. A study of patients being treated for Hepatitis-B found Hepatitis-B present underneath the protective caps, but research has not stopped trying to produce a pain-free way to vaccinate the masses. The next step was creating a jet injector with a disposable cartridge, which worked as planned.

This kind of injection has actually been used by diabetics since around 2000 and currently makes up seven percent of the world market for injections, and the largest market is still centered around diabetics. But the technology is far from perfect.

Cross-contamination is still a concern, and modern jet injectors experience “splashback” – which is when the jet stream pushes back against the nozzle. The possibility of sucking blood from the skin into the next dose of the injection also exists. This is known as “fluid suckback.”

A number of jet injection devices that have WHO certification are available, but with an effort to rebrand them as “Needle Free Injectors” in an attempt to ditch the stigma associated with previous jet injectors. The quest for a real, working hypospray will continue in the meantime, hopefully with the goal of actually calling it a hypospray.