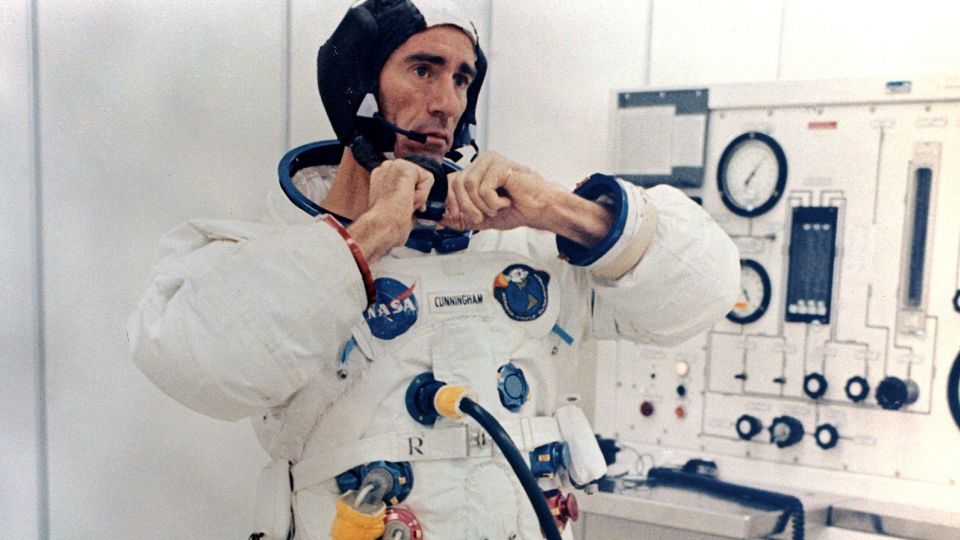 On Tuesday, January 3, 2022, NASA announced the passing of Apollo astronaut Walter Cunningham at the age of 90. Cunningham was the last surviving crew member of Apollo 7, the first crewed flight in the Apollo Program.

Born on March 16, 1932, Cunningham was a native of Creston, Iowa. After graduating from Venice High School in Los Angeles, California, in 1950, he studied at Santa Monica College. The next year, he left school to enlist in the Navy. In 1952, Cunningham began flight training and went on to serve in the Marine Corps as a fighter pilot from 1953 to 1956. His military service included 54 missions as a night fighter pilot in Korea. After leaving active duty in 1956, Cunningham remained in the Marine Corps Reserve and eventually rose to the rank of colonel.

Walter Cunningham resumed his studies at Santa Monica College before transferring to UCLA in 1958. There, he received a Bachelor of Arts degree with honors in 1960 and a Masters of Arts degree with distinction in 1961, both in physics. Cunningham went to work for the Rand Corporation for three years where he worked on classified defense studies and problems related to the Earth’s magnetosphere. In October 1963, he was selected for NASA‘s third astronaut class.

On October 11, 1968, Cunningham served as the Lunar Module Pilot aboard Apollo 7. The 11-day flight was the first human flight test of an Apollo spacecraft. Although Apollo 7 carried no Lunar Module, Cunningham was responsible for all spacecraft systems except for launch and navigation. Accompanied by astronauts Walter M. Schirra, Jr. and Donn F. Eisele, Cunningham tested maneuvers necessary for docking and lunar orbit rendezvous using the second stage of their Saturn IB rocket. After 263 hours and 4.5 million miles, Apollo 7 splashed back down in the Atlantic Ocean on October 22, 1968.

After Apollo, Cunningham served as the chief of the Skylab branch of the Flight Crew Directorate. He was responsible for the operational inputs for five major pieces of manned space hardware, two different launch vehicles and 56 major experiments that comprised the Skylab Program. In 1971, Cunningham retired from NASA and went on to lead technical and financial organizations.

In 2008, Walter Cunningham was awarded the NASA Distinguished Service Medal for his part in the Apollo 7 mission. He was also inducted into the Astronaut Hall of Fame, International Space Hall of Fame, Iowa Aviation Hall of Fame, San Diego Air and Space Museum Hall of Fame, and Houston Hall of Fame. Interestingly, Cunningham, Schirra and Eisele also won an Emmy in the form of the National Academy of Television Arts and Sciences Special Trustee Award for their live television transmission from space during the Apollo 7 mission. Over his distinguished career, Cunningham accumulated more than 4,500 hours of flying time in 40 different aircraft, including more than 3,400 in jet aircraft.

“Walt Cunningham was a fighter pilot, physicist, and an entrepreneur – but, above all, he was an explorer. On Apollo 7, the first launch of a crewed Apollo mission, Walt and his crewmates made history, paving the way for the Artemis Generation we see today,” said NASA Administrator Bill Nelson in a NASA release. “NASA will always remember his contributions to our nation’s space program and sends our condolences to the Cunningham family.”