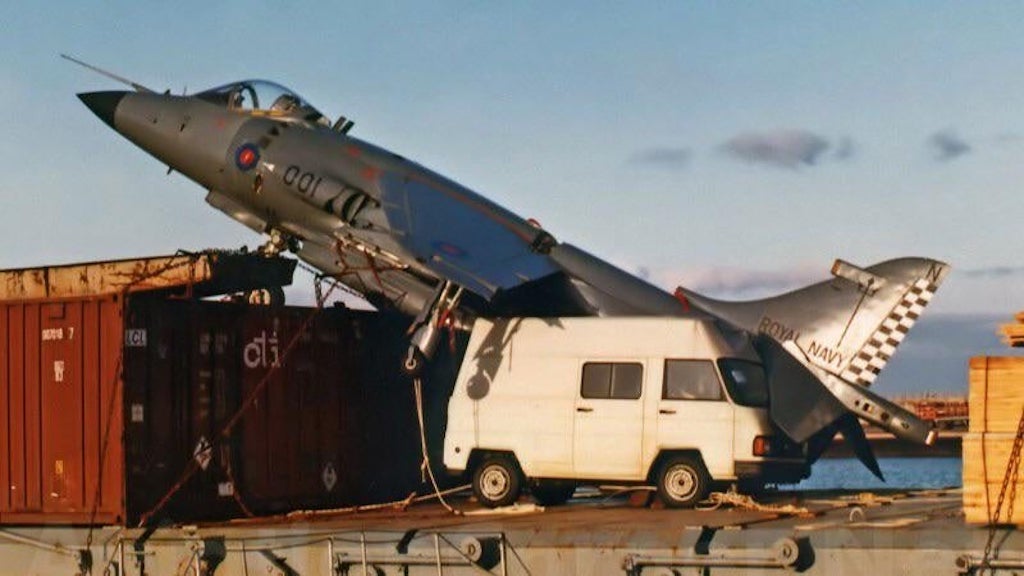 Mishaps and malfunctions happen during military training exercises. Sometimes, these events lead to military aircraft making emergency landings at civilian airports and giving travelers something to look at. However, in the case of one British Royal Navy Sea Harrier, a malfunction and other contributing factors during an exercise led to it landing on a civilian container ship.

On June 6, 1983, Sub-lieutenant Ian “Soapy” Watson flew his first NATO exercise in a Sea Harrier from HMS Illustrious off the coast of Portugal. He was tasked with visually locating a French aircraft carrier under combat conditions. This meant strict radio-silence and no radar. After completing his search, Watson began his return to Illustrious. However, he was unable to locate the carrier.

The Sea Harrier’s radio stopped working and the radar received no return. His aircraft was also running low on fuel so Watson headed for the nearby shipping lane. There, he made visual contact with the container ship Alraigo. Initially, Watson planned to eject near the civilian ship so that he could be fished from the water. However, he realized that the ship’s cargo provided a flat enough landing surface for his Sea Harrier and its vertical landing capability.

As Watson settled his Sea Harrier on one of the containers, the aircraft began to slide backwards. Although Watson tried to retract the landing gear, the main gear rolled off the back of the container and the fighter’s rear fuselage struck a delivery van before it hit the deck. Still, the aircraft was safely aboard and Watson avoided joining the Martin Baker club. Alraigo‘s captain was adamant that the incident not affect his delivery schedule and the ship continued on to Tenerife.

Four days later, with Watson and the Sea Harrier still aboard, Alraigo docked at Santa Cruz de Tenerife. The ship’s crew and owners filed a salvage claim with the Royal Navy. They were awarded £570,000 in compensation. A Board of Inquiry uncovered that Watson completed only 75% of his training before he was sent to sea. The board blamed the incident on his inexperience and his commanders for sending him up in a plane that was “not fully prepared for the sortie.”

Following the Alraigo incident, despite skillfully saving his aircraft, Watson was reprimanded and given a desk job. He remained in the Royal Navy and eventually got back in the cockpit. Watson went on to acquire 2,000 flight hours in the Sea Harrier and a further 900 in the F/A-18 before resigning his commission in 1996.