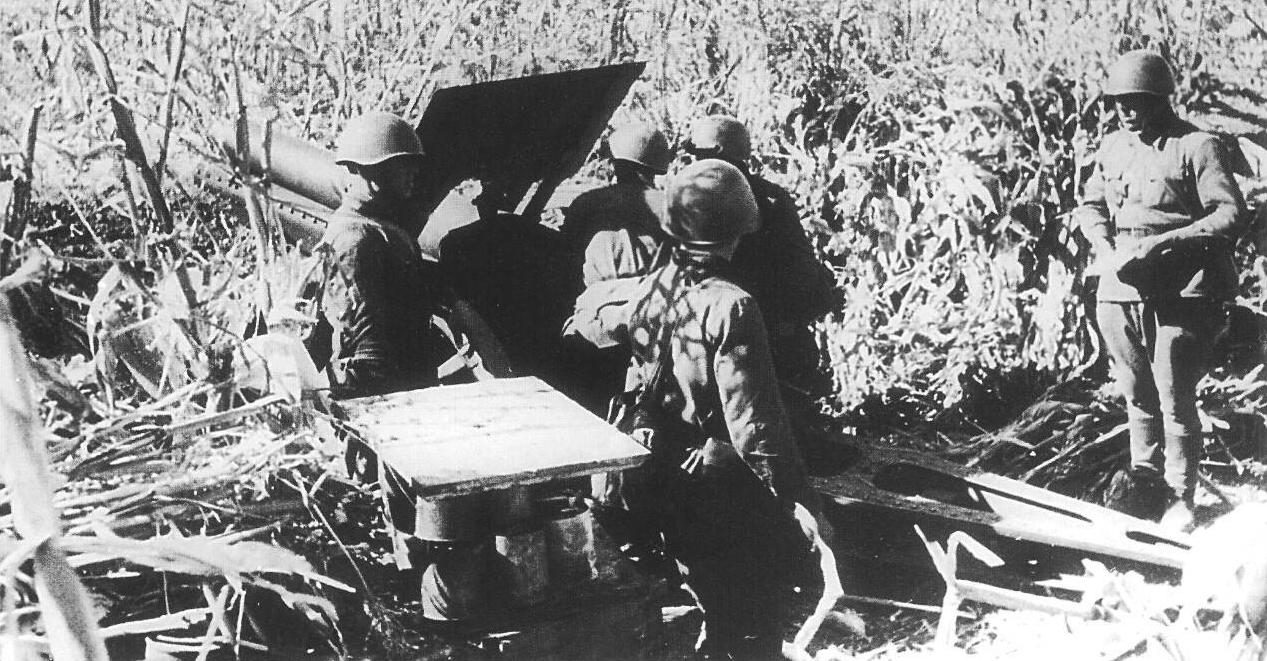 Soviet gun crew in action at Odessa in 1941.

Deception tactics are a staple of warfare, from the use of the Trojan Horse right through the 1991 Gulf War. World War II was no different. In fact, deception tactics reached a new level of sophistication during the second world war.

There was nothing sophisticated about what the Soviet Union did to the Romanian Army during the 1941 Battle of Odessa. A lot of armies use deception to keep an enemy from advancing or to bolster what appears to be their lines of defense. The Red Army decided to use deception to go on the offensive.

In early 1941, World War II was not going well for the Soviet Union. Nazi Germany and its allies had invaded by surprise in June and advanced quickly into Soviet territory. Hundreds of thousands of troops were captured, entire armies were destroyed and city after city had fallen to the Axis.

Near the port city of Odessa, the Soviet Army and Navy were facing off against parts of the German 11th Army and the entire Romanian 4th army. 73 full days of fighting began on August 8, 1941, but Odessa was not about to fall silently to the fascist enemy. The Red Army defense of Odessa would inflict more than 92,000 casualties on the Romanians, who attacked with 340,000 total personnel.

After overrunning the Soviet positions outside the city, the Romanians surrounded Odessa and began attacking all along the front simultaneously. Despite its setbacks, the Soviet forces inside repeatedly counter-attacked and made the Romanians pay dearly for the ground they captured.

If there’s one thing Red Army troops in World War II had, it’s bravado. They were often low on things most other armies take for granted, like food, uniforms, weapons, and ammunition. This lack of equipment and supplies meant that Soviet forces often had to figure out another way of achieving their objectives, because if they didn’t, they might be killed by their own army.

By September 20, 1941, Odessa was completely surrounded and the Soviet defenders inside the city had no means of getting new tanks, new troops or spare parts. They decided to use everything at their disposal to dislodge their enemy. This meant creating a new kind of armored vehicle, the Ni-1 improvised tank.

The Soviets decided to use the Ni-1 on a daring, early morning assault on the outskirts of the city. With their headlights on, they would drive right toward the dug-in Romanian positions. The only problem was that their “tank” wasn’t a tank at all, it was a tractor.

Ni-1, as the tanks were called, was from the Russian for “for a scare.” The Russians were going to mount the main turrets from their destroyed T-26 tanks onto armored tractors, but when that plan fell through, they equipped the tractors with machine guns instead. This wasn’t a one-time deal, either, the Ni-1 tank was manufactured in the city, rolled out and participated in the city’s defense.

Workers in Odessa essentially took STZ-3 agricultural tractors, welded a heavy box to the top and stuck a heavy mountain gun or large-caliber machine guns inside. They added armor to the tractor using naval armor and rubber. The sound it made on the move was apparently terrifying.

They didn’t look exactly like tanks in full daylight, but for groggy defenders in the middle of darkness, rumbling hulks of metal shooting 7.62 rounds was enough of a scare. When the Ni-1 came for the Romanians, they broke and fled. Although the Ni-1 wasn’t enough to hold the city, it contributed to Odessa’s status as one of four Soviet Hero Cities of World War II.