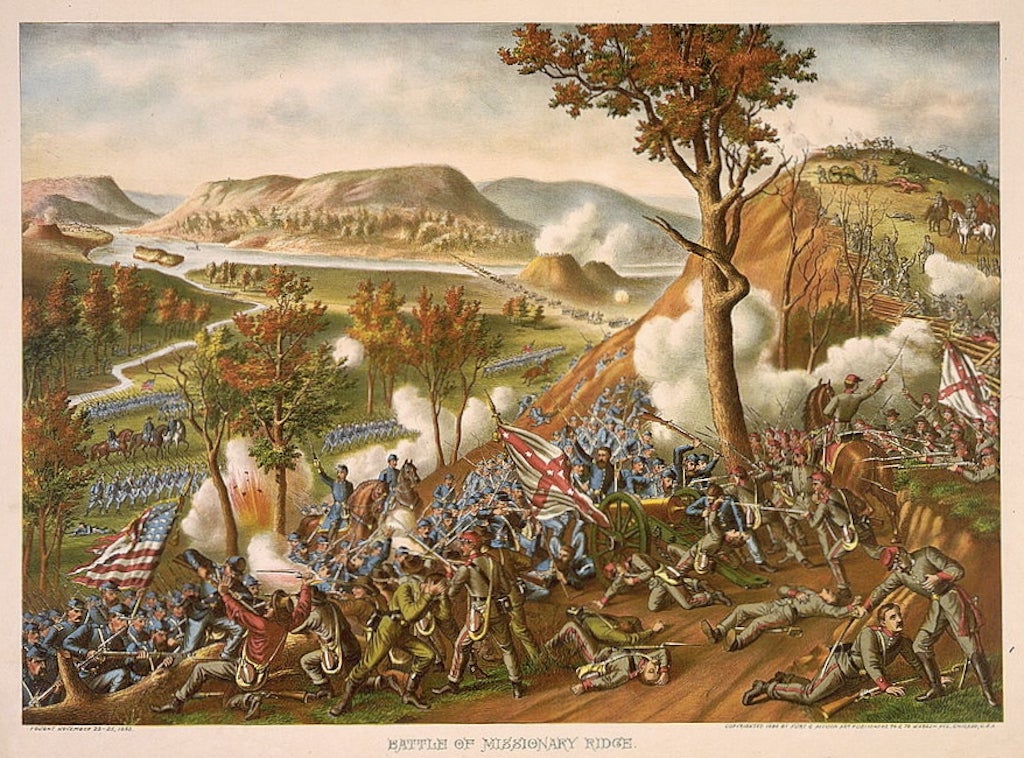 In September 1863, the Union Army in the west was reeling from a hard-fought loss at the Battle of Chickamauga. One Union commander, Gen. William Rosecrans, led his army to Chattanooga, where Confederates under Braxton Bragg laid siege to the city and began to cut off its supply lines.

When Ulysses S. Grant was placed in command of the Union forces in the West, he replaced Rosecrans and opened up a lifeline to feed the troops in Chattanooga, but Bragg’s army continued its siege. He determined that nearby Missionary Ridge was the key to breaking the Confederate siege.

The ridge was heavily defended by the rebels, with three lines of trenches; one at the base, one in the midpoint, and one at the top. It allowed Bragg to maintain his communications and gave him access to two railroads. Control of Tennessee depended on that one position. The plan to dislodge Bragg became a who’s who of Civil War history.

Grant called for reinforcements from the east under Gen. William T. Sherman and a force from the Army of the Potomac under Gen. Joseph Hooker. These two armies were going to hit both flanks of Bragg’s rebel army at the same time while Union troops pushed the Confederates’ weakened center.

Unfortunately for the Union army, Sherman’s map of the ridge was not accurate, and showed a continuous ridgeline instead of the series of hills that actually ended Missionary Ridge. Sherman captured the hills and got into place, but the delay in movement caused by the map gave Bragg enough time to discern what was happening.

Bragg launched two assaults at Sherman’s position, but each was unsuccessful. In the end, the Confederates blocked the roads and destroyed bridges into the Chattanooga Valley, delaying Hooker’s army. When the attack was supposed to launch on the 25, Hooker wasn’t in position and Sherman launched without him.

Grant ordered his central attack to go in early, which happened to be under the command of Gen. George H. Thomas, also known as the “Sledgehammer,” and the “Rock of Chickamauga.” Thomas’ men had been waiting for the order all day and when it was finally given, they were not only ready, they took some incredible  initiative.

Thomas’ orders were to assault the first trench on Missionary Ridge which they did just after 3:30 pm that day. They not only assaulted the first trench, but quickly swept it clear of Confederates, who abandoned the position in a hurry. Instead of stopping at the first trench as ordered, Thomas’ men advanced up the hill.

Grant was furious and demanded to know who ordered the advance, only to find out that no one had. The men were doing it on their own. Within an hour, the Union soldiers had captured all three trenches, along with some Confederate artillery. They were then using the artillery to shell enemy positions.

Soon, they were at the top, threatening Bragg’s headquarters. The Confederates panicked and ran away from the fighting, fleeing from Chattanooga altogether. The Union could now control Tennessee, and from there, drive into Georgia, which Sherman would do just a few months later. The assault on Missionary Ridge was soon after known as the “Miracle of Missionary Ridge.”