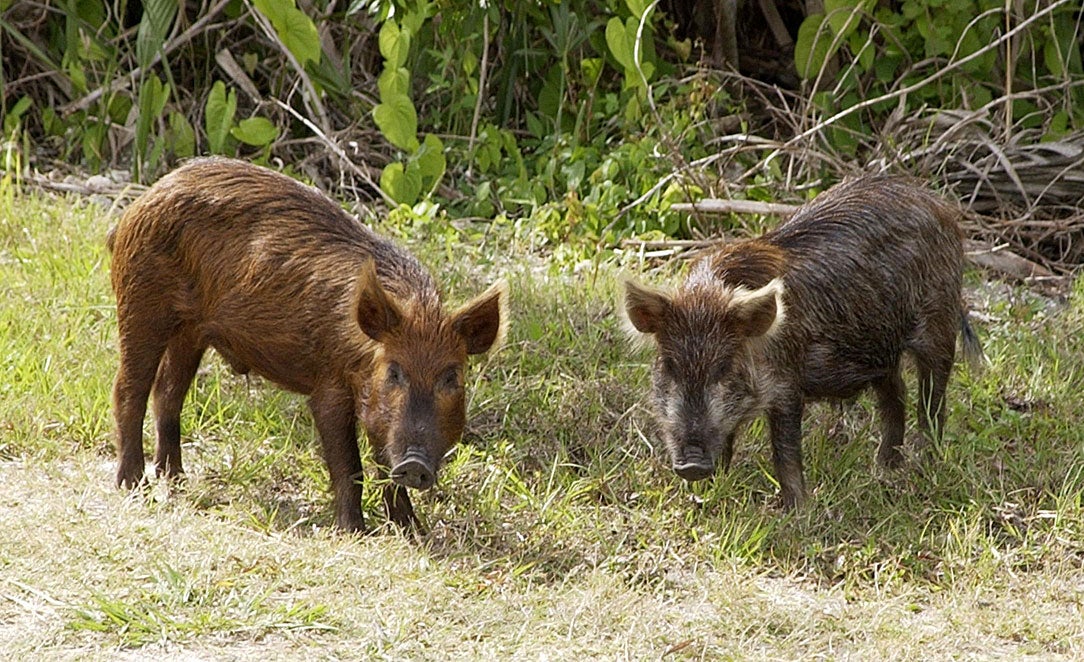 In the late 1980s and early 1990s, the demand for wild boar meat surged and many Canadian farmers imported wild pigs from Europe to produce domestically. But wild means they were never meant to be fenced in. Some of those wild boar either hopped the fences, dug under them, or simply tore through them.

Since 1990, the population of wild boar has grown at an exponential rate, as high as 9% annually. It amounts to what one magazine called an “invasion of Canada.” Although the bulk of the estimated 60,000 annual wild hog sightings in the past decade are from the Prairie Provinces, it’s going to become a huge problem for everyone in a hurry.

What’s a Canadian farmer to do? They actually helped exacerbate the problem. When the prices of boar meat tanked in the 2000s, some actually released their boars into the wild, where they can breed up to six piglets at a time. With no natural predators and ample farmland for food, they are now a significant population.

The feral pigs are destroying crops, harassing livestock, pushing wildlife out of their natural habitats, causing erosion and other damages to ecosystems. To make matters worse, interbreeding with domestic pigs has created a kind of “super pig” that is also tolerant to the cold weather of the Canadian plains. The destruction they cause is known as an “ecological train wreck.”

In Ontario, the province has developed a system that counts on sightings of the wild hogs, and allows for teams of researchers to track them, trap them, and kill entire herds of them. This strategy has not only prevented the spread of the animals, it could lead to a pig-free Ontario in 40 years.

Other provinces have not adopted this strategy, if they’ve adopted any strategy at all. The Prairie Provinces like Saskatchewan or Manitoba most afflicted with the herds of wild boar, some weighing up to 600 pounds of bristle fur and tusk, haven’t implemented any kind of preventative measures or elimination strategy.

Saskatchewan outsources a strategy similar to the Ontario strategy, but it’s not seeing the same success. Manitoba allows citizens to hunt wild pigs any time of the years with no restrictions. Alberta goes a step further, offering a bounty for $75 for each set of ear brought in by hunters. So far, no one has collected a bounty.

Canadian officials say that hunting is not a good control measure, and that relying on hunting alone is likely to increase the wild pig population. The pigs simply flee to new areas to avoid hunters. But Alberta is the spot for wild game hunters. Local businesses offer hunting packages that include lodging, cleaning and dressing the kills, and even allow hunters to bring their own weapons.

“People call wild pigs the poor man’s grizzly, because it’s one of the few species, like wild grizzlies, that will actually try and kill you,” Ryan Brook, an associate professor in agriculture and bioresources at the University of Saskatchewan, told the Narwhal.

Brook also explained that the pigs can contaminate water sources used by human, spread diseases, and ruin economies. “This is not a Saskatchewan problem. It’s not a Canada problem. It’s a global problem,” he said.

The pigs could soon find their way to the American border, where an invasive species could be the worst illegal immigrant, wrecking American national parks in the border states. So maybe it’s time for Americans to lend our northern neighbor a hand and start hunting our food like our ancestors.

Read between the lines, America: there’s no limit on game, they’ll pay you per set of ears, and we can bring our own weapons. Canada is practically begging Americans to pay a visit and take home some swine souvenirs.