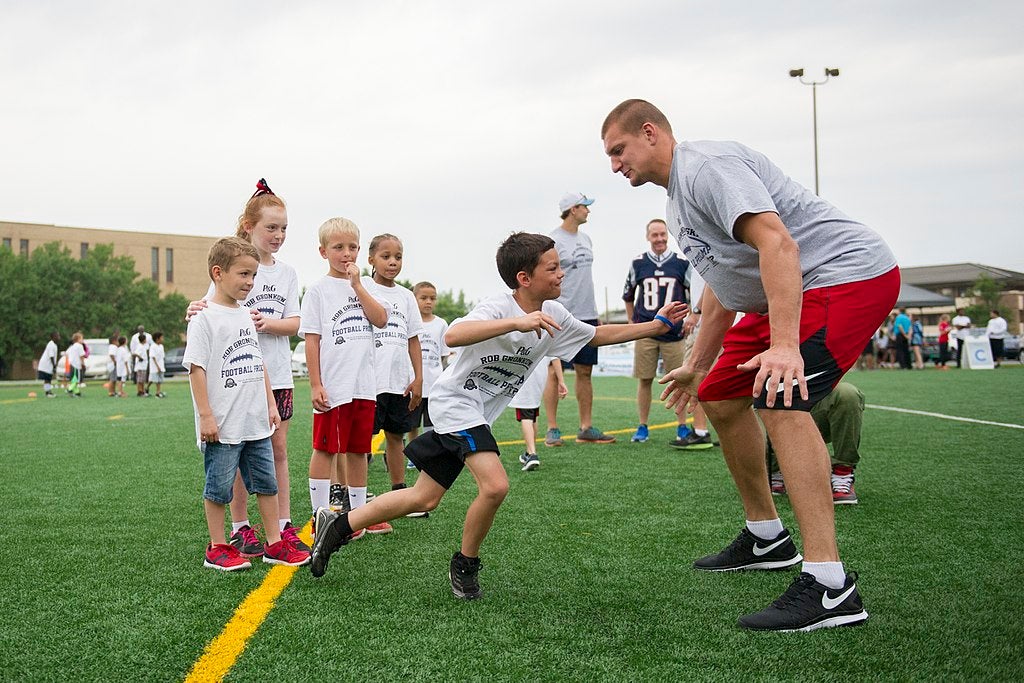 In television commercials, Tampa Bay Buccaneers tight end Rob Gronkowski is on a mission to get a USAA membership, so he can get access to the great rates military veterans and their families enjoy through the company, but to no avail.

In the real world, Gronk isn’t out to get military-style benefits, he’s out to show his appreciation for military members, their service and the families who support them – he just does it in ways that only Rob Gronkowski can.

Gronk is well known for his dedication to the military. The future hall of famer once appeared at a deployment of hundreds of troops, just to see them off and talk to their families. This season, despite the demands of being a star with the NFL’s defending Super Bowl champions, Gronk still found time to go out and give back to the military-veteran community.

He not only supported military families through his own charity, the GronkNation Youth Foundation, which seeks to inspire young people to reach their maximum potential through sports, education, community, and fitness, he did it with other groups, including USAA and USO.

In week 13 of the 2021 NFL season, Gronkowski participated in the league’s “My Cause My Cleats” campaign, which helps bring awareness and publicity to the charities or causes that mean the most to them. After being worn in week 13, the cleats are auctioned off and the proceeds given to the selected charities. Gronk chose to honor the USO and his own GronkNation Youth Foundation, with the custom made cleats.

When Army Master Sgt. Richard Jasen, his wife and three children visited Tampa Bay’s Raymond James Stadium, Gronk was there to surprise them aboard the Buccaneers’ massive pirate ship.

The Bucs may not have made the Super Bowl this year but that didn’t stop Gronk from coming to the game. He had another surprise in store for a USAA member and military veteran. Courtesy of USAA and USO, Gronk was able to present Erik Hanno, a veteran of the wars in Iraq and Afghanistan, with two tickets to Super Bowl LVI.

“He’s from Tampa, a great city with a great team there,” Gronkowski joked as he prepared to talk to military veterans and family members at USAA’s Salute to Service Lounge at Super Bowl LVI. “He’s from the Tampa Bay area, he may not be a Buccaneers fan, but that’s alright. It was just cool to surprise him and see the smile on his face that he’s going to the Super Bowl.”

The Salute to Service Lounge is provided by USAA for members of the armed forces, veterans and their families to provide snacks, drinks, and exclusive access to their favorite players while visiting the Super Bowl Experience. The players do a question and answer session, then sign autographs and take photos with the military members and their families. Gronkowski was a fan favorite.

“Giving back to the military was instilled in me since I was a rookie,” Gronkowski told the crowd. “They put their lives on the line, put whatever is happening with them on pause, to go overseas and protect us, give us the freedom to play. So, when I saw the opportunity to join with USAA and partner with USO, It was a no-brainer.”