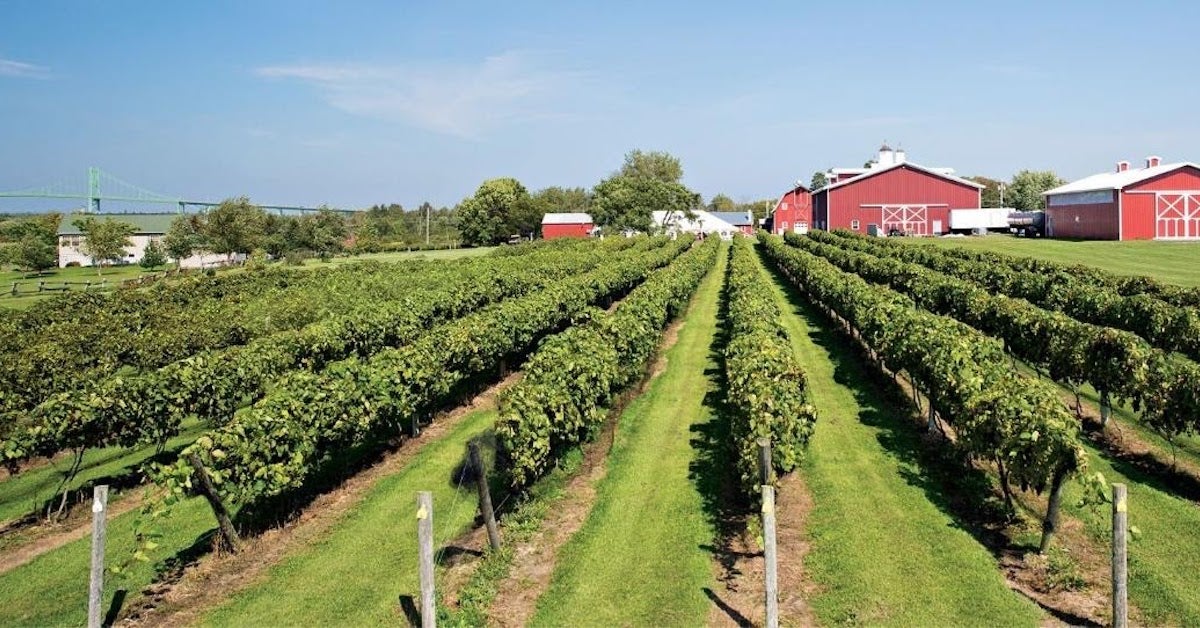 The winery has over 19 acres of wine grapes (Thousand Islands Winery).

The Thousand Islands Region in upstate New York is famous for the Saint Lawrence River seaway, impressive castles, gorgeous summers, and the salad dressing named for the region. Aside from the dressing, the region’s best-known features bear quite a bit of resemblance to the Moselle and Rhine River regions in Germany, which are famed for their beauty and wineries. One Army officer took notice of the similarities during his time in the service and decided to recreate the winery scene of the German river regions in the North Country.

Steve Conaway joined the Army straight out of high school in 1981. He rose to the rank of Staff Sergeant before commissioning as an officer. His service in the Air Defense Artillery branch took him to bases across the United States, Greece, and Germany. When Conaway was posted to Fort Drum, NY, he discovered the Saint Lawrence River and the Thousand Islands Region. “The Saint Lawrence River reminded me of the rivers in Germany,” Conaway recalled. “The castles and the river were very similar.” During his five years in Germany, Conaway had become passionate about Riesling and, in 1999, had the idea to start a winery in the Thousand Islands and began conducting market research.

Through the course of his research, Conaway discovered that there were no wineries in the Thousand Islands Region. He contacted New York grape experts at Cornell University who informed him that grapes had never been grown in the Thousand Islands Region and could not be grown there because of the cold climate. Undeterred, Conaway continued his research and, using the limited power of the early internet, found that cold-hardy grapes were being grown by wineries across the border in Quebec. In 2001, then-Captain Conaway took a road trip to Canada to meet with the farmers and learn the trade. The Canadian farmers showed him how to nurse the grapes through the frost of winter and introduced him to a variety of cold-hardy grapes that could survive temperatures as low as -30˚ F.

Before Conaway could put the newfound knowledge to use, his winery plans were interrupted by the events of 9/11. In response, Conaway deployed with the 10th Mountain Division in support of Operation Enduring Freedom. The deployment took him to Uzbekistan and Kazakhstan before he eventually arrived in Afghanistan. Now working as a contracting officer, Conaway helped to establish the initial coalition forces contracting footprint across all three countries including the first establishments at the former Soviet airbase at Bagram. However, perhaps his most important establishment was taking place back in the states.

With the help of his wife Erika, Conaway purchased an old dairy farm in Alexandria Bay, NY while he was deployed. Fittingly, the farm had previously been owned by a famed Riverboat Captain and an Army Reserves Captain, making Conaway the third Captain to own the farm. Upon returning from deployment in 2002, Conaway and his wife set to work converting the dairy farm to a winery. It took one year to get the winery going.

In 2003, the same year that Conaway retired from the Army as a Major, the Thousand Islands Winery had one part-time employee and sold and produced 1,100 gallons of wine. The first four years saw the winery operating at a loss. “I bought the farm with houses, boat storage, and tenants,” Conaway said. “I had my military retirement income. So, I never counted on the winery to make any money initially.” Luckily, the fifth year of operation saw the winery turn a profit and it has turned a profit every year since.

The first year of operation, all of the winery’s sales were local. “I sold every bottle at retail out of the front door,” Conaway said. As the winery expanded, Conaway began distribution in liquor stores throughout New York State. In 2010, Thousand Islands Winery expanded into other states as well. Online sales have helped to expand distribution, but so has the Army.

The 10th Mountain Division maintains two Brigade Combat Teams at Fort Drum, NY and one at Fort Polk, LA. Oftentimes, soldiers that have been stationed at one will eventually find themselves posted to the other. Thanks to a partnership with the 10th Mountain Division Association, Thousand Islands Winery wines made their way down south to Fort Polk where they can be found in the Class Six. In 2020, the Thousand Islands Winery had 65 employees in the summertime, including employees in Louisiana, and produced and sold over 75,000 gallons of wine. This year also saw the winery enter an agreement with Republic National Distribution Company as operations expanded into Kentucky, South Carolina, Virginia, Washington, D.C., Maryland, and Georgia.

Since 2007, the Thousand Islands Winery has received 168 medals in wine competitions throughout the country. Despite the doubt that many people had about the Conaways and their winery, the Thousand Islands Winery has thrived. “I didn’t know anything about private industry,” Conaway said about starting the business. “I got out of the Army and failure wasn’t an option.” Using the skills he had acquired throughout his 22 ½ years in the Army, Conaway was able to apply planning considerations like safety, hazmat, personnel structure, and organizational charts to the winery. “I encourage soldiers to fall back on the stuff they did while they were in the military,” Conaway said. “I always tell them, ‘If you want to be an entrepreneur when you get out of the military, everything you’re already doing translates into the civilian workforce.’”