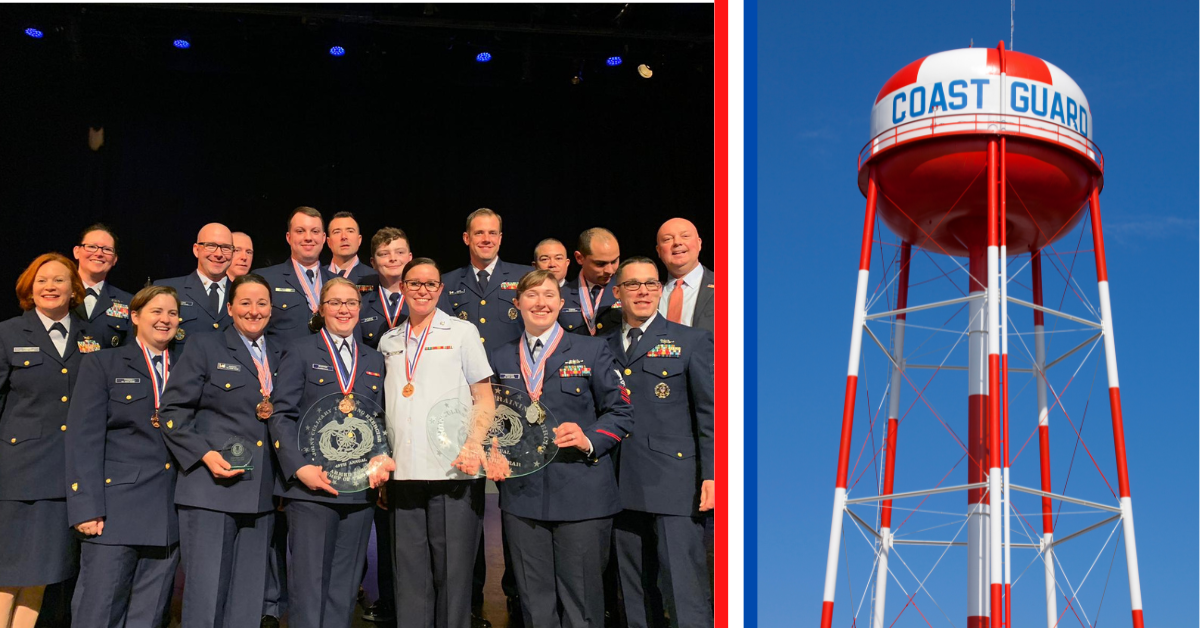 When people think of food prepared in the military, visions of dried out MREs and meat surprise chow halls may come to mind. For individuals looking to be real chefs, it’s a turn off. The Coast Guard is changing the narrative: one extraordinary meal at a time.

In 2020, the Coast Guard took the Culinary Team of the year – beating out all of the other branches of services in the competition. The winning streak continued with First Class Petty Officer Danielle Hughes taking the top honors for Chef of the Year at the American Culinary Federation National Conference, beating out all other military and civilian chefs in the competition while becoming the first female to take home the honor. That same day, Chief Matthew Shaw won Pastry Chef of the Year.

Senior Chief Edward Fuchs has been around to watch it all come together. But before he was a Coastie, he was a professional chef. After finishing his apprenticeship, he was burnt out from the long hours in the kitchen and was suffering through a bout of serious illness with no insurance. He wanted something different.

“I was actually contemplating going into the Air Force because I was living in Omaha, Nebraska, and STRATCOM is here. I was in Chicago for the National Restaurant Association Show and ran into the culinary program manager for the Coast Guard. We talked for hours that night,” Fuchs explained. “I enlisted and missed my own graduation from college for my culinary degree because I was on my way to boot camp.”

In the 17 years since he joined, Fuchs has watched the culinary program evolve in leaps and bounds. He referenced Master Chief Justin Reed fighting to get the rating changed from Food Service Specialist to Culinary Specialist and the increase in viable training now available to Coasties wanting to chef.

“The Coast Guard was supposed to be a four-year pitstop for me,” he laughed. “By the time I finished four years, 50% of the class I graduated with was no longer cooking. When I did my second enlistment with the Coast Guard, I was one of two still cooking out of a graduating class of 20. There’s a lot of people I know who just are not in the culinary arts anymore, who tried to grind it out on the civilian side. Having the opportunities to compete with the American Culinary Federation, work alongside some of the amazing chefs in the DC area, doing the USO competitions and the USO events, doing the chef’s table at Fort Belvoir … all these opportunities as a cook in the military have been incredible. I would have never been afforded any of these options as a civilian chef.”

After boot camp, each potential Culinary Specialist (CS) attends a 14 week training program in Petaluma, California. But the opportunities to learn don’t stop there.

“I’m currently the president of the Old Dominion chapter for the American Culinary Federation. I oversee the certification of civilian chefs as a certified proctor with them. I myself am a certified chef, educator and a certified executive chef,” Fuchs shared. “The opportunities I had and still have being a cook in the Coast Guard are just limitless. It’s really only limited by your ability to want to do it.”

A CS in the Coast Guard can serve in over 370 units worldwide. They run dining facilities, massive galleys on large cutters or independently run the kitchens on patrol boats and small boat stations. And if you’re a chef, that doesn’t have to be your only role. Many CSes take the opportunity of collateral duties on cutters to become boarding team members alongside their fellow Coasties, participating in drug busts and humanitarian work vital to the Coast Guard mission.

“If you’re looking for a way to create your own menus, manage your own restaurant and figure out what it is to actually be a chef, the Coast Guard is the way to do it. We will put you in a position where you’ll be able to run your own dining facility, manage your own money and feed your own crew. And what’s great about cooking in the military compared to being a chef out in industry is that their clientele changes on a daily basis so the menu doesn’t have to change,” he said. “Here you get to try new things and cook different kinds of food because your clientele stays the same, so your menu has to change. It really challenges you as a chef to step out of your comfort zone and explore different cuisines.”

In recent years, the Coast Guard has finally received the increased congressional support, budget and technological advancements it has needed for so long. But like the other branches of service, recruiting took a damaging hit during the COVID-19 pandemic. And the years of stretching pennies took its toll on the force, creating a deep need for CSes.

Not only does the Coast Guard want more culinary specialists, they’re putting big money into the program. Individuals wanting to enlist and become a chef can earn up to a $40,000 sign on bonus. If you’re already a professional chef, that bonus can be bumped all the way up to $50,000. And they want to keep you: a re-enlistment bonus can earn you up to $30,000.

“We’re working hard to change the assumption that military food is like prison food without the bars,” Fuchs shared. “This year alone, having the pastry chef of the year and the chef of the year both win the national competition and the fact that the chef of the year who won the national competition has no formal training, just what she learned in the Coast Guard. She went and waxed the floor with a bunch of civilian chefs that have a lot more attributes on paper. The program has made incredible strides and I know we’re just getting started.”