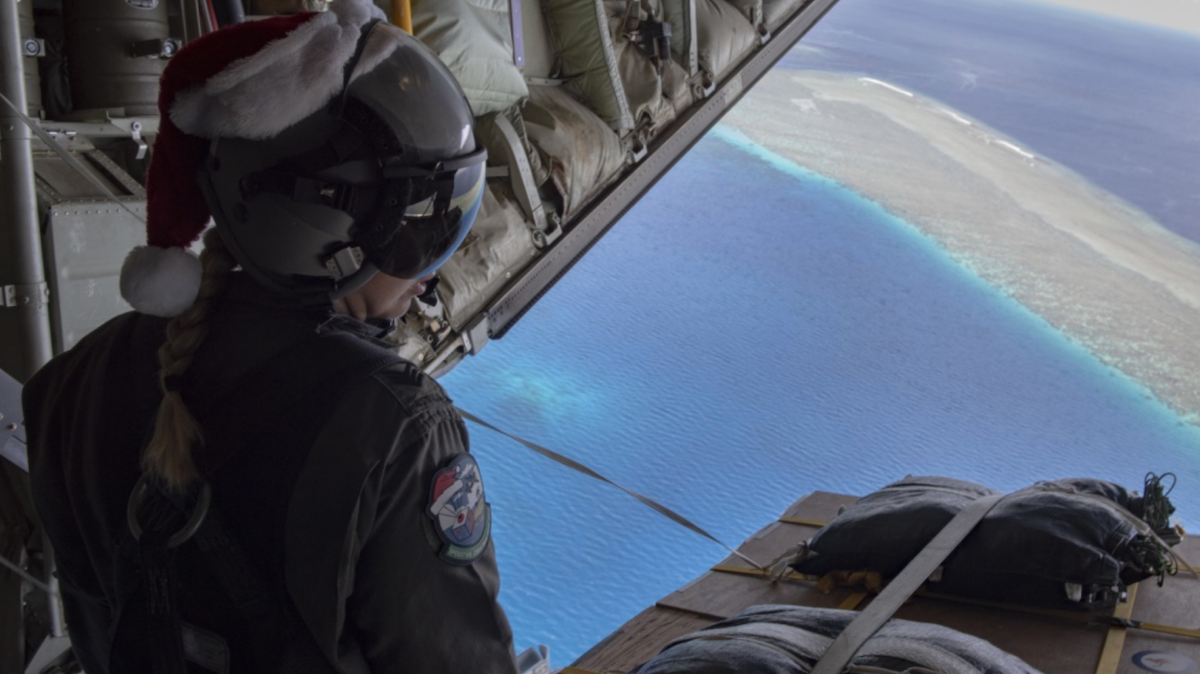 Unless you’re a Guamanian local, been stationed on Guam or have participated in the drop itself, Netflix’s new holiday movie may be the first time that you’ve of Operation Christmas Drop. In fact, the operation is the Department of Defense’s longest-running mission and the longest-running humanitarian airlift in the world.

1. It started with a random act of kindness

During the Christmas season of 1952, a WB-29 Superfortress of the 54th Weather Reconnaissance Wing was flying a mission from Andersen Air Force Base in Guam. While over the Micronesian atoll of Kapinga-Marangi, the crew spotted islanders waving at them from down below. In the spirit of Christmas, the airmen collected supplies that they had on board, placed them in a container with a parachute attached and circled around to drop the care package. Since then, the operation has grown and continued every year.

2. It benefits islanders and airmen

According to an Andersen Air Force Base statement, “The event provides readiness training to participating aircrew, allowing them to gain experience in conducting airdrops while providing critical supplies to 56 Micronesian islands impacting about 20,000 people.” Aircrews coordinate the drops with the islanders via ham radio. Using Low-Cost Low-Altitude air drops, containers are dropped in the water just off the shore to avoid hitting any locals. In 2011, the drop included 25 boxes of IV fluids for Fais Island to combat an outbreak of dengue fever. In 2013, the drops included critical supplies of food and water for 30 recovery workers on Kayangel Island after it was hit hard by Typhoon Haiyan. In 2020, though additional safety measures will be put in place due to COVID-19, Operation Christmas Drop will go on. This year’s drop targets 55 Micronesian islands across a 1.8 million square nautical mile operating area.

3. The drops are completely legal

Unlike how it’s portrayed in the Netflix film, there is no Congressional issue with Operation Christmas Drop. The drops are conducted under the protection of the Denton Amendment. Also known as the Denton Cargo Program, it was launched in 1985. The program allows for space available on military aircraft to be used to carry humanitarian aid supplies to countries in need and for disaster relief. Aid under the Denton Program comes at minimal or no added cost to taxpayers since it utilizes excess space on scheduled military flights. Today, the program is administered jointly by USAID, the Department of State, the Defense Security Cooperation Agency and the Department of Defense.

4. The operation involves units across the Pacific

As mentioned in the Netflix film, Operation Christmas Drop involves international partners like Japan, Australia and the Philippines. While the U.S. Air Force’s 36th Wing and 734th Air Mobility Squadron are based at Andersen Air Force Base in Guam and play a major part in the operation, other organizations support the drop, too. The 374th Airlift Wing at Yokota Air Base, the University of Guam and the “Operation Christmas Drop” private organization all help to make the drop possible.

5. The drops are all donations

In the months leading up to the drop, volunteers set up donation boxes and raise money from local businesses and citizens. A week before the drop, volunteer service members, civilians and contractors collect and sort through the donations. Afterwards, riggers at Yokota and Andersen volunteer their spare time to build boxes to hold the donations. The majority of items dropped are school supplies, clothes, rice, construction materials, fishing equipment and toys.

While many service members will be quick to point out military inaccuracies in the film, the positive effect that the drop has cannot be argued. The relief and joy that Operation Christmas Drop brings to the people of Micronesia every year is an incredible achievement and a testament to the hard work and dedication of the volunteers that make it possible.